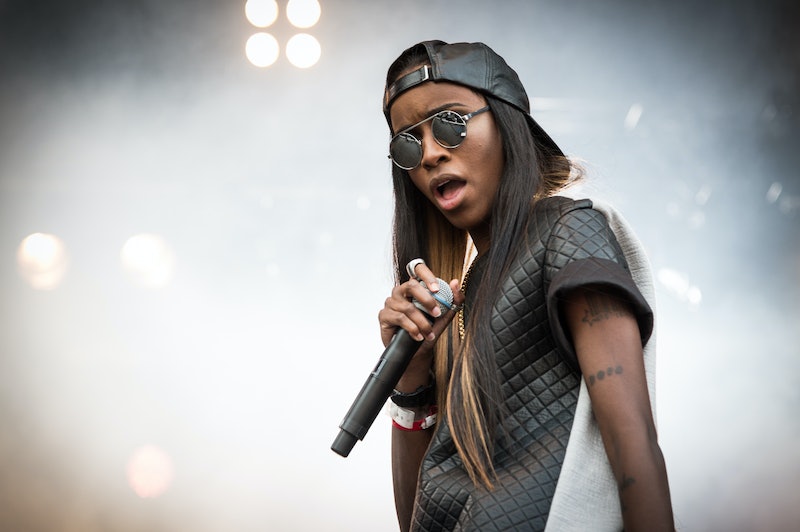 People are talking more about gender these days than ever before. With the rise of trans superstars like Laverne Cox leading the way for national conversations about trans justice, to Caitlyn Jenner’s very public coming out, to Miley’s open identification as gender fluid, to the rise of androgynous fashion, we appear to be at a cultural tipping point with regard to our understanding that gender is not binary. This isn’t to say that there isn’t a mountain of progress to be made with regard to understanding the gender and sexuality spectrums or fighting back against gendered oppression. But despite the work to be done, we can still highlight some of the very real progress that’s been made in the past 20 years or so to make non-binary genders — that is, gender identities that are not exclusively male or female — more visible than ever. One of those identities that often doesn't get enough attention is "agender" — but what does being agender mean?

In order to answer that question, it's important to first understand that gender, while usually thought of as synonymous with biological sex, is actually an entirely separate component of a person’s identity. There are many terms and identities to familiarize yourself with when it comes to gender, and rather than have nonbinary people shoulder the responsibility of education, it should also be the responsibility of cisgender people to educate themselves about how to respectfully engage and discuss nonbinary genders and people.

Among these terms and identities is “agender,” or someone who identifies as without gender. It is a gender identity that falls under the nonbinary and transgender umbrella terms. This experience is similar to and overlaps with that of being gender neutral. Prominent agender cultural icons include rapper Angel Haze, who uses “they” and “them” pronouns and told Buzzfeed in an article last spring, “To be honest with you, I’m not really a girl.”

Here are six things you should know about what it means to be agender so that you can be a better ally to nonbinary people and to the gender justice movement.

Gender dysphoria is a condition characterized by the DSM as a marked difference between an individual’s expressed/experienced gender and the gender others would assign them. This often causes sufferers to experience severe clinical distress as well as impairment in social and occupational function.

A person who is agender does not necessarily have the same experience as someone who has gender dysphoria and who might decide to live in a physical body that matches the gender that they feel on the inside. Someone does not need to want to change any part of their body to be agender. They may just not feel that they are either masculine or feminine, but be perfectly happy with their bodies. They also might not be happy in their body — but don't make assumptions either way.

2. Agender Doesn't Have To Do With Being Asexual

As previously stated, agender means not identifying with any gender. Asexuality, entirely separate from a gender identity, is a sexual orientation characterized by a lack of sexual attraction to people of any gender. While some people who are agender might be asexual, do not assume that agender people do not desire sex or participate in romantic relationships. Just like people of any gender identity, people who are agender can have all manner of desires and attractions.

The prevailing assumption is that people who are agender must only want to use gender neutral pronouns like “they/them”. However, agender people may want to use any manner of pronouns including “she/her” or “he/him”.

If you are unsure what pronoun someone (of any gender or presentation) uses, the best thing to do is first listen to see what pronouns others use when referring to that person. If you must ask which pronoun someone prefers, do so in a private way. If you mess up their pronouns, apologize sincerely and then move on.

4. Agender People Are Not Always Androgynous

Agender people can enjoy playing with their gender presentation, just like anyone else. Just because someone might identify outside the gender binary does not mean that there aren't times in which they may desire to appear more feminine or masculine or a mixture of both, depending on how they feel. Dressing a certain way can be an empowering feeling for anyone, but it can also be about playfulness and fun as much as it can be a political declaration, and the two are not mutually exclusive. Experimenting with gender presentation and clothing can be an important and critical step for anyone trying to figure out how they can feel most at home in their body and identity.

5. Agender Is Not the Same As Genderfluid

As stated before, agender individuals do not identify as male or female exclusively. This is not to be confused with genderfluid, another identity that also falls under the transgender/nonbinary/multigender umbrellas. Where people who are agender do not have a specific gender identity, people who are genderfluid may identify as more feminine or masculine or a mixture or something else entirely over a period of time (day to day, monthly, etc.) In speaking with Elle magazine about genderfluidity, Australian model and Orange is the New Black star Ruby Rose explains her genderfluidity this way: "I'm not a guy; I don't really feel like a woman, but obviously I was born one. So, I'm somewhere in the middle, which — in my perfect imagination — is like having the best of both sexes."

It should be noted that though they are different, agender and genderfluid are two identities that fall under the definition of nonbinary gender, which simply means any gender that is not solely male or female. The gender binary as it exists today is largely part of Western culture and thought, where many other cultures have and continue to recognize various systems of gender.

6. Agender People Are Not Just “Confused”

Many people who identify as queer, trans, with a sexual and/or gender identity beyond that of heterosexual and cisgender have been told at one point or another that they must just be “confused” or “going through a phase.” It is harmful to assume that just because someone has an experience that is different from yours, that it must not be real. You may just think nonbinary people “don’t exist” because there are so few spaces where they can be themselves without fear.

In fact, there have been nonbinary people throughout the course of history, and many cultures even have specific words and spaces for people who identify across the gender spectrum. Honoring the experiences and identities of all people that you meet, regardless of how much you may understand them, is an integral part of fighting for gender justice and personal freedom.