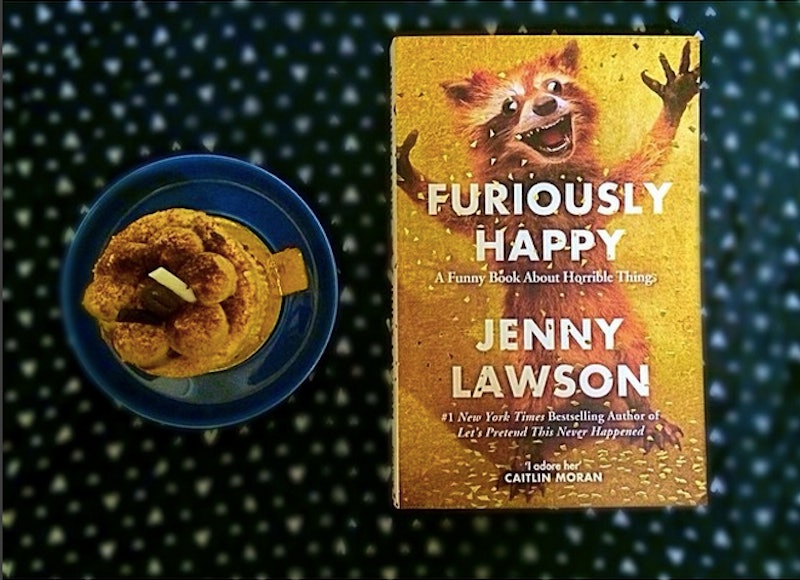 "I'm fucking done with sadness, and I don't know what's up the ass of the universe lately but I've HAD IT. I AM GOING TO BE FURIOUSLY HAPPY, OUT OF SHEER SPITE. ... I'm going to destroy the goddamn universe with my irrational joy..."

Maybe it's my commitment to optimism or my confrontational nature, but when I read Jenny Lawson's new collection of personal essays, Furiously Happy, that quote really stuck out to me. Telling someone who suffers from depression, anxiety, or any other form of mental illness to "get over it" or "just try being happy" is an offensive, illogical, and all around jerk-ish thing to do. But to tell someone with a mental illness to essentially give the middle finger to the universe and try to live the best life possible, despite her illness? Now that I can get behind.

Furiously Happy is, well, unconventional. Not that you should have expected anything else from Lawson, whose first book, Let's Pretend This Never Happened, featured a dead mouse dressed like Hamlet on the cover. Lawson opens up about her mental illness, how it affects her life, and how it causes her to see the world around her in ways that may be different from how you see it. Or, maybe she sees things exactly how you see them, which means you're exactly the reader Lawson is looking for.

Furiously Happy manages to be simultaneously hilarious (like, "I was belly laughing on the train and getting weird looks" funny) and also a poignant, at times dark, look at the world of mental illness. Above all else, though, Lawson successfully aims to dismantle the stigma that surrounds those with mental illnesses, and she does so while carrying a purse made out of a dead armadillo.

Maybe those kinds of accessories are too much for you (lame), but you don't have to fully commit to Lawson's lifestyle if you really can't get down with taxidermied animals (again, lame). But you can still learn a few tricks from her. Here are five ways that you, too, can be Furiously Happy, Lawson-style.

Take The Road Less Traveled, Even If You Don't Always Want To. And Make Sure To Do It While Wearing A Koala Costume

Traveling is often way outside of Lawson's comfort zone, so when her friend invited her on a trip to Australia, Lawson was quick to respond with a "Hell no." Eventually, however, she realized that part of being Furiously Happy was being brave enough to break out of her comfort zone and try new things.

Of course, in typical Lawson style, one of those things she decided to try was cuddling with a koala bear while wearing an adult-sized koala outfit, because she's freakin' awesome. But the point is: to be Furiously Happy, you have to be willing to do something unexpected, something you never in a million years thought you could do. You have to prove to the universe that you're amazing and can do whatever you damn well please. Possibly dressed as a marsupial.

Never Apologize For Loving The Things You Love, Even If Those Things Are Dead Animals

I enjoy a lot of things that other people find strange, like preferring to read books about wizards or putting peanut butter on basically everything I eat. We're all different, and we all like different things. You should never let anyone make you feel embarrassed or ashamed about what you enjoy in life just because it may be unpopular or uncool.

When Lawson's husband, Victor, freaks out because she's brought another taxidermied animal into the house, or gets mad because she's misplaced the three dead cats she's received as a gift, does she apologize for the things that she loves? Of course not! She stands up for herself and goes back to staging a raccoon rodeo with her two stuffed raccoon.

Fake It Until You Make It, But Always Feel Free To Get Help From Friends, Famous Authors, And Stuffed Mice

After her first book was published, Lawson was terrified that she wouldn't be able to handle publicity events with the bigwigs of the publishing world. Despite her fear, she handled these events in true Lawson style: she took out a stuffed dead mouse during a speech and spent the rest of her time talking to an audience of reporters in a squeaky mouse voice. Later, she would begin taking the advice of fellow author and fantastic human, Neil Gaiman, who told her, "Pretend you're good at it." Whenever she would feel overwhelmed or like she wasn't able to handle something in her professional life, Lawson would think back on Gaiman's advice and pretend she knew what she was doing. And guess what? It usually totally fooled people. I'm stealing this advice, and so should you.

It's OK To Sometimes Barricade Yourself In A Hotel Room, Especially If You're Embarrassed That You Just Stepped On A Fish At A Restaurant

Sometimes, despite your best efforts to be Furiously Happy, you're going to fail. And it's OK to fail, and it's OK to retreat from the world for a little while if you need time to yourself. Lawson, who has to travel for various conferences and publicity events, sometimes gets so overwhelmed that she hides out in her hotel room, unable to face interacting with anyone. She knows that if she tries to push herself too far, the outcome won't be pretty. So she listens to what her body and her brain tell her they need, and she respects that. Also, sometimes when you leave your hotel room you mortify yourself at a restaurant by accidentally stepping on a fish in a koi pond. So maybe the universe is telling you to stay in.

It's not always easy to be Furiously Happy, and you aren't always the only one who's affected. Our personal struggles and battles have an impact on those we love, whether we realize it or not. Sometimes we can make the lives of our family and friends harder, but that doesn't mean that we should distance ourselves from them. Lawson once asked her husband, Victor, whether he thought his life would be easier without her. He responded, "It might be easier. But it wouldn't be better."

Our true family and friends love all of us, including our problems. We shouldn't actively try to make their lives more difficult, but we also shouldn't underestimate our worth to their happiness. You are important to someone, and someone's day is better because you're around. Never, ever forget that.