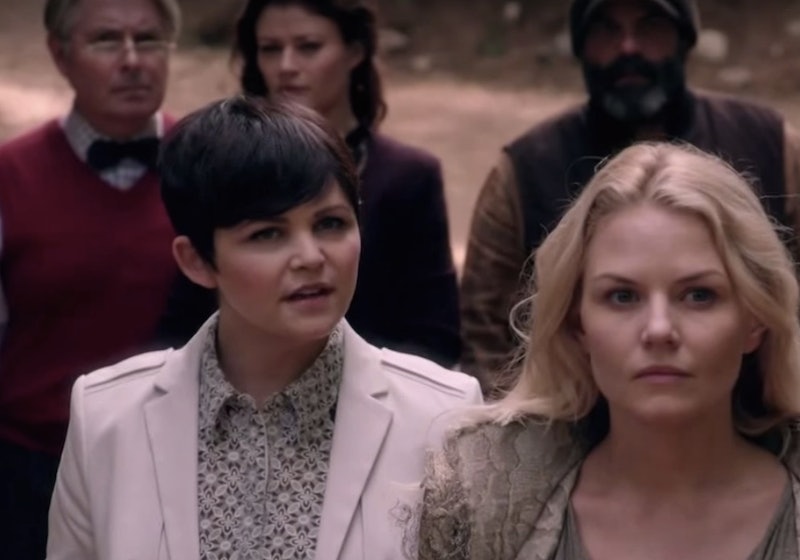 We've been waiting what feels like forever (but in reality has only been a little over four months) for Once Upon A Time Season 5, but it's finally coming our way in just over two weeks. I know that still seems like a long time, but we're in the final heat of the hiatus and on September 27, it's all going to get REAL. We know that we're dealing with Emma going Dark, the Storybrooke crew realm-hopping to Camelot, the hunt for Merlin, the addition of Merida from Brave, and Zelena's impending motherhood. So far, however, all of those storylines have been left pretty vague. Thankfully, the new Season 5 promo trailer gives us a little more to go on, and there's a lot to learn from it if you pay close attention.

While the promo is only 30 seconds long and individual scenes are over in an instant, there's still much to be taken from it in terms of the specifics of what exactly is going on. From the looks of things, the first half of the season (lest we forget, Once tortures us again in a few months with a winter hiatus) seems really intense and dramatic in the best possible way. Here are a few things that we know will be happening from the trailer.

Arthur Will Actually Pull The Sword From The Stone

Once has a habit of rewriting some of our most beloved tales, but there are elements to the original stories that remain, and I'm glad this is one of them.

Arthur reveals that he and his fellow Knights of the Round Table actually knew that Emma, Snow, Regina, etc. were going to come to Camelot. How they know remains to be seen, but given that we know Emma was sent to the Enchanted Forest when she became the Dark One, something tells me she's already been causing trouble there.

It's unclear what's actually happening here. Does Zelena have some random knife, or is it Emma's dagger, that Hook got all broody over having and stole since Emma's his girlfriend and he thinks he has some kind of ownership over her belongings because of it? Of COURSE it leads to Zelena getting her power back. Why am I not surprised? Why was he even down there to begin with? Ugh, Hook. So handsome, and yet so stupid sometimes.

Then She Gets Her Magic Back!

Uh oh... this isn't good. Also, Zelena doesn't actually look pregnant here, but given that the first episode is due to pick up right where the Season 4 finale left off, that's still believable. Glad to see she didn't waste any time getting evil again!

The look on Emma's face here is so heartbreaking. It's full of confusion, recognition of the burden she's taken on, and a bit of fear of the power that dagger has. I'm not sure why Snow is shoving it in her face (likely to prove to Emma that she's still good and can resist this, or to show her how serious the situation is — you know what she's like with the lesson teaching), but interesting nonetheless.

Well, that doesn't look like a good situation. I mean, obviously she's going to survive, but it all looks rather serious, don't you think?

Emma Is Having A Hard Time Controlling Her Power

It's safe to assume that Emma is going to have a hard time channeling all that dark energy she's suddenly in possession of, especially considering she didn't really know how to fully harness her light magic, at least not in the ways she really wanted to. This sounds like trouble.

You can watch the full promo yourself below:

It looks like we're in for some pretty amazing stuff this season, and I, for one, can't wait (if you couldn't tell already).