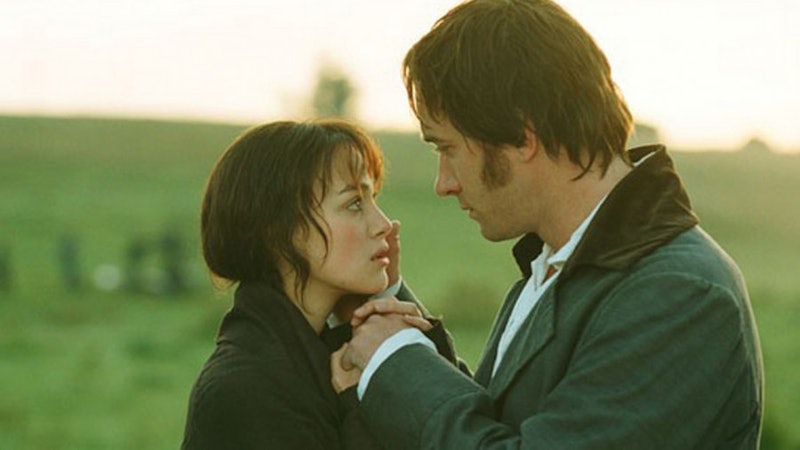 Pride and Prejudice (the Keira Knightley version) came out ten years ago, so it looks like I've been listening to the soundtrack nonstop for a decade. Some facts about Pride and Prejudice are well known; I remember that the movie was slightly controversial when it first came out, mostly because some purists were annoyed that the beautiful it girl of the day was cast as their beloved Elizabeth. In addition to this problem that ended up not being a real problem, a lot of things happened behind the scenes of Pride and Prejudice that I had no idea about.

A lot goes into making a period piece, and it's impressive how much detail and reverence for the source material went into this film. While I know that some felt like this movie cheapened Pride and Prejudice by making it more mainstream, it seems that everyone from director Joe Wright to the many actors cared deeply about making this iteration as perfect as possible. While it can't quite top the BBC version, all that work and care certainly paid off. Here are some facts you might not have known about the 2005 Pride and Prejudice, from little Easter eggs thoughtfully placed throughout the film to behind-the-scenes drama.

1. Rosamund Pike turned down a role in Harry Potter to play Jane

She would have played Rita Skeeter.

2. Matthew Macfadyen, who played Darcy, had to be led by a flag during that misty climatic scene

He apparently had pretty poor eyesight.

3. Elizabeth can be seen reading her own story

4. The hilarious scene where Bingley rehearses proposing to Jane was improvised

Resulting in one of the funniest moments in the film.

5. Knightley was instructed not to pout in the film

Director Joe Wright insisted, but she apparently snuck one in.

6. Emma Thompson wrote some of the film's scenes

Because she is perfect. Apparently, she wrote the hilarious scene in which Elizabeth hesitates to tell her aunt and uncle about Lydia's elopement, walking in and out of the room.

They made the best out of a potentially awkward situation.

8. There were different endings to the movie in Britain and the US

The off-book American version — "Mrs. Darcy" followed by lots of kissing — did not test well with British audiences.

So, whether you're a BBC purist or think this version was superior, it's hard to deny that a lot of thought and effort went into making the 2005 Pride and Prejudice. Excuse me while I go rewatch it.

More like this
These 25 International Horror Movies On Netflix Prove Fear Is A Universal Language
By Bustle Editors
Read The First Pages Of Emma Rosenblum’s Highly Anticipated Debut, 'Bad Summer People'
By Samantha Leach
Twitter Has So Many Thoughts About ‘Don’t Worry Darling’ After Its Release
By Stephanie Topacio Long
20 Photos Of The 'Hocus Pocus' Cast Then & Now
By Radhika Menon
Get Even More From Bustle — Sign Up For The Newsletter