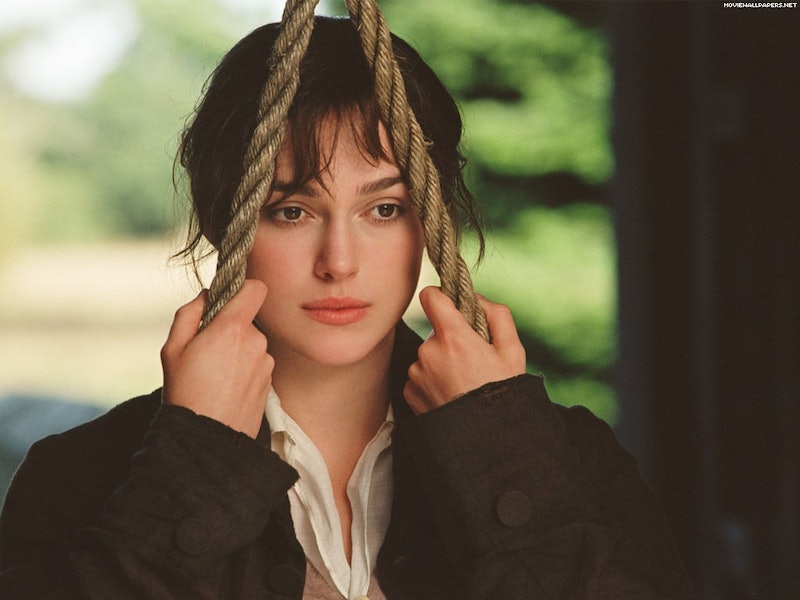 Since it was first published in 1813, there have been dozens of adaptations of Jane Austen's Pride and Prejudice, including the Keira Knightley version, which came out ten years ago today. From modern retellings to faithful adaptations, and from books to stage to film, the story of Elizabeth Bennet and Mr. Darcy has captured the imagination of many. Part of the appeal seems to be the comforting period nature of the story, which has inspired works of beautiful aesthetics and a nostalgic feel.

However, the fact that Pride and Prejudice has been retold in many different times and places suggests a universality of theme that transcends the novelty of period; arguing has always been hot, and the story of a woman and a man whose dislike for each other inevitably manifests in love has obvious appeal. I think there is also something about the reserved intelligence of Elizabeth Bennett that makes a great and unusual heroine.

Whether it's told with a Bollywood flair or written out as a modern day diary, the versions of Pride and Prejudice all share that same sense of romantic thrill and inevitability, and none of the following have failed as adaptations or standing on their own. While there are too many adaptations of Pride and Prejudice to list thoroughly, here are some of the most notable film and TV examples definitively ranked.

This BBC version centers around a murder mystery that occurs six years after the familiar story ends, and it's a dramatic success, though obviously lacking the coziness of the original.

This time traveling spin on Pride and Prejudice was very silly, but remarkably good. The short-lived ITV show tells the story of a modern-day woman who enters the world of the Bennets. Hijinks ensue.

The idea of a Bollywood Pride and Prejudice is fun and innovative, perhaps lacking the subtlety of most adaptations but making up for it with songs.

Laurence Olivier and Greer Garson starred in this classic version, which had a script co-penned by Aldous Huxley. It's perfectly cast and delightful, though it does make some significant and not totally necessary changes to the book.

While it's easy to be skeptical about a modern day vlog adaptation of a Jane Austen novel, this one is laugh-out-loud funny and innovative in format.

The Keira Knightley version is completely charming, While they aren't my favorite leads, the soundtrack and cinematography were amazing.

A hilariously perfect modern take on Pride and Prejudice — I highly recommend the movie and the book.

Yes, Colin Firth might be the best Darcy, but Jennifer Ehle is the perfect Elizabeth, her knowing smile and quiet confidence instantly iconic. This version, though long, is definitely the one to watch.

Whether you're looking for a faithful version or a modern retelling, this weekend might be a good time to watch some Pride and Prejudice. Even if you haven't read the book, you're in for a treat, though you also are missing out on a truly great novel.

More like this
Jessica Simpson On The Time She Was Pursued By A Backstreet Boy & An *NSYNC Member
By The Editors
Your Guide To Watching 'Everything Everywhere All At Once' In The UK
By El Hunt and Sophie McEvoy
Reese Witherspoon Confirms This Fan Favorite Will Return For 'Legally Blonde 3'
By Jake Viswanath
Taylor Lautner Copped To Finding Jacob "A Little Annoying" In Twilight
By Stephanie Topacio Long
Get Even More From Bustle — Sign Up For The Newsletter
From hair trends to relationship advice, our daily newsletter has everything you need to sound like a person who’s on TikTok, even if you aren’t.