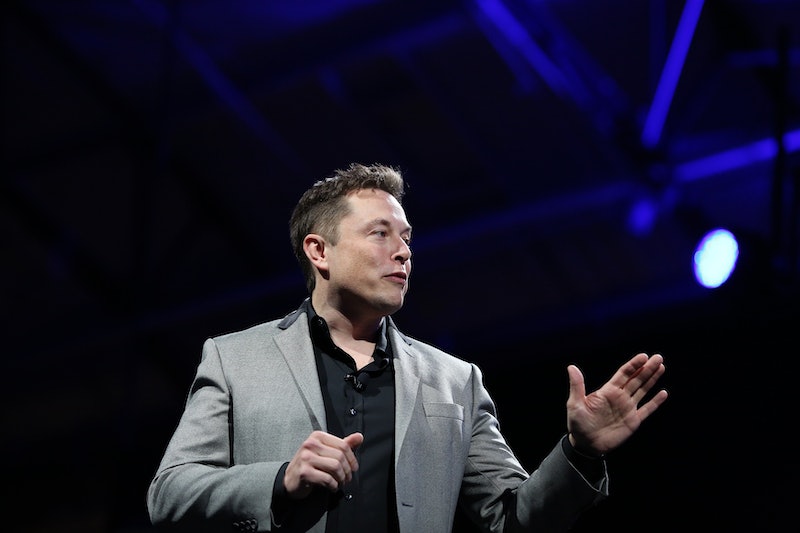 Elon Musk is nothing if not a screaming genius. The SpaceX founder and PayPal co-creator (who coded and sold his first video game at the age of 12) is widely considered to be an even more intriguing character than late Apple founder and CEO Steve Jobs (and that's not an easy thing to be). But while his inventions and personality quirks tend to draw the most media attention, it's Musk's insane thoughts about the future of technology that make us all go "...Huh?"

The perpetually busy Musk (a former colleague once recalled him reading an old Russian rocket manual poolside in Vegas) has a lot of opinions about what he sees as a plateau in technological progress, too. "We got to the moon, but have never done anything better since," he complained in an interview with Wired in 2007. "I'm disappointed that we have not made more progress since Apollo [and] I don't even see a plan that says we're going to do better than Apollo to exceed that goal."

Instead of just waiting around for someone to create something, however, the eccentric and oft-maligned Musk has made a fortune off of doing just the opposite: Introducing plenty of bizarre ideas for his own idealized Tomorrowland, and pushing the envelope in terms of consumer-friendly technology. Here's what he thinks that tech-infused future will look like.

In an interview for his 2015 biography, Elon Musk: Tesla, SpaceX, and the Quest for a Fantastic Future, Musk vented that his Tesla Motors offices (which builds Musk's famous electric cars) weren't as cool as the Google offices in Mountain View, California because they didn't have slides in the lobby for employees to get around. He said that he hopes he could one day fix the problem using cutting-edge technology: roller coasters. He explained,

Everybody around here has slides in their lobbies. I'm actually wondering about putting in a roller coaster — like a functional roller coaster at the factory in Fremont. You'd get in, and it would take you around factory but also up and down. Who else has a roller coaster? I'm thinking about doing that with SpaceX, too. That one might be even bigger since SpaceX has like ten buildings now.

Forget high-speed rails; Musk wants to fling us all around the country. In 2013, he penned a paper on what he described as a "Hyperloop" — a system of interconnected pneumatic tubes which would transport passengers in small capsules across the country in a matter of hours. In his paper, Musk elaborated,

When the California “high speed” rail was approved, I was quite disappointed, as I know many others were too. How could it be that the home of Silicon Valley and JPL – doing incredible things like indexing all the world’s knowledge and putting rovers on Mars – would build a bullet train that is both one of the most expensive per mile and one of the slowest in the world?

The Hyperloop (or something similar) is, in my opinion, the right solution. ... The pods and linear motors [of a pneumatic tube transport system] are relatively minor expenses compared to the tube itself – several hundred million dollars at most, compared with several billion dollars for the tube. [But] even several billion is a low number when compared with several tens of billion proposed for [high speed tracks].

While everyone scoffed at the suggestion initially, it seems that Musk is having the last laugh. In August this year, Wired reported that Oerlikon Leybold Vacuum and global engineering design firm Aecom had signed an agreement with a Hyperloop company to start work on a tube system of their own. (Musk himself is not involved with any Hyperloop projects, but instead published his initial paper for anyone to build on, because he's just that generous.)

Driverless Cars For Everyone

The driverless car is really having its day in the sun, and if Musk has anything to say about it, it'll stay that way for a very long time. From Google to BMW, on down the line to General Motors, a handful of auto companies have been working hard over the past few years to ensure that dreams like Musk's are a reality by 2020. But Musk isn't satisfied with just building a driverless vehicle; he wants to make them standard for travelers everywhere. Not only only would they eliminate road rage, but they'd also be safer, he explained.

In an speech about his own driverless Tesla technology at the 2015 GPU Technology Conference, Musk added:

I almost view it as a solved problem. We know what to do, and we’ll be there in a few years … You’ll be able to tell your car, "Take me home, go here, go there," anything. In the distant future, people may [even] outlaw driving cars because it’s too dangerous. You can’t have a person driving a two-ton death machine.

Anyone who saw Christopher Nolan's behemoth space blockbuster Interstellar knows that humans desperately need to step up their space travel game or be left in the dust (literally). But while the majority of us understand that this will require time and a lot of brainstorming sessions, Musk is growing impatient to just get humanity the hell out of here. In a 2013 TED Talk, he mused,

I really think there's a fundamental difference, if you sort of look into the future, between a humanity that is a space-faring civilization, that's out there exploring the stars, on multiple planets, and I think that's really exciting, compared with one where we are forever confined to Earth until some eventual extinction event.

In another comment to Space.com in May 2014, Musk added,

There will be those who can afford to go (to Mars), and those who want to go. I think if we can achieve that intersection, then it will happen … and, hopefully, it will happen before I'm dead.

At least he's excited about it instead of moping about the eventual demise of the human race ... right?

The future might be "now", but that doesn't mean there's room for improvement — or rather, an all-encapsulating virtual reality indistinguishable from our own, according to Musk. Speaking on the improvements in virtual reality tech like Oculus — a headset that immerses the user in a completely virtual world displayed on screens before their eyes — Musk told audience members at the 2014 New Establishment Summit:

It’s quite transformative. You really feel like you’re there, and then when you come out of it, it feels like reality isn’t real. I think we’ll see less physical movement in the future, as a result of the virtual-reality stuff, [and as technology improves] it becomes, beyond a certain resolution, indistinguishable from reality.

Musk then pondered whether the world we live in currently wasn't just some virtual reality all it's own.

"There are likely to be millions, maybe billions of such simulations, so then, what are the odds that we’re actually in base reality?" he said. "Isn’t it one in billions?"

More like this
The 8 Best Walking Shoes For Metatarsalgia, According To A Podiatrist
By Lauren Moison
Anguilla Is The Under-The-Radar Caribbean Destination You Need To Visit
By Rachel Lapidos
Here’s How To Find Your Spotify Wrapped
By Emma Lord and Emma Carey
Here’s How To Turn On Instagram Post Notifications
By Megan Grant and Alexis Morillo
Get Even More From Bustle — Sign Up For The Newsletter