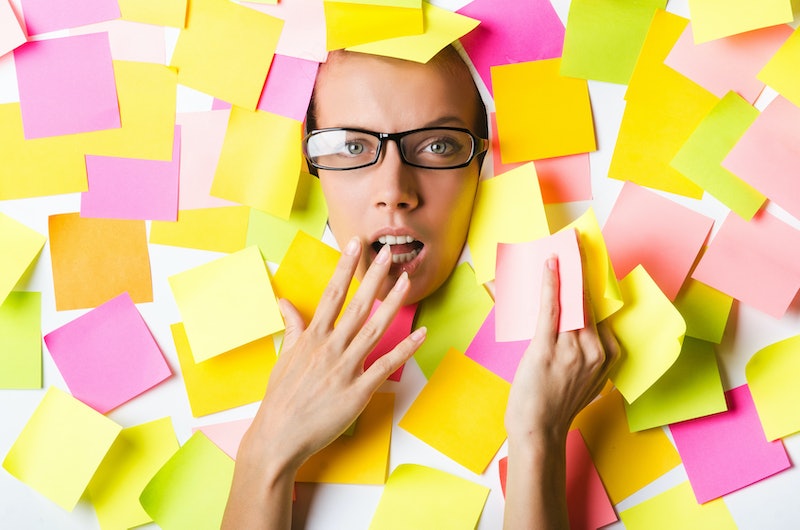 Procrastination: the process of carrying out less urgent tasks before more urgent ones, doing more pleasurable things in lieu of less pleasurable ones, putting off until next week what could be done today. Students do it. Yo-pros do it. I do it. Chances are, you do it.

According to Freud, procrastination is linked to the pleasure principle. According to some (more modern) psychologists, it's a manifestation of anxiety linked to starting and finishing tasks. Regardless, procrastination makes us all less productive. On the bright side, I'm pretty sure it's also the single force that keeps most of the Internet up and running. Cat GIFS anyone?

So, since it is the season of New Year's Resolutions and self-improvement, here's a list of ways to stop procrastinating in 2014.

1. Name The Challenge, And The Goal

The first step (to nearly everything) is acceptance. Career site Brazen advises you to write down exactly what you want to get done, and then write down all the things (Facebook, Twitter, your ex boyfriend or girlfriend) that can get in the way.

This sage advice from Lifehack rings true. Smaller tasks are significantly less overwhelming to attack. Plus, then you get the satisfaction that comes from completing multiple things (even though, in reality, you're just doing one, big thing). If you're a checklist person, this is a great trick because you get to check off more things, and the point of a checklist is to check off as many things as humanly possible.

This gem comes from Jeff Sorenson via The Huffington Post. I wholeheartedly agree: Alcohol can make you useless, and being hungover is the ultimate procrastination technique. He also has a very good caveat: Ignore this rule completely if you're a writer. Drinking as a means to writing puts you in the company of Earnest Hemingway, F. Scott Fitzgerald, and many other great literary misogynists. Definitely get on their level to try to finish your version of the Great American Novel.

This piece of advice from CollegeHumor is actually super interesting. It paints procrastination as a battle between what you want to do and what you should do, and says that those who can avoid procrastinating are those who are able to think about thinking, to put the needs of their future selves before the wants of their current selves. It's also filled with really cool infographics.

More like this
An Open Letter To The Person Who Bought Steve Jobs’ Birkenstocks For $218,000
By Ginny Hogan
8 Money Saving Experts To Follow For Accessible Advice
By Maxine Harrison
What Does “The Rizz” Mean On TikTok? The Viral Slang Term, Explained
By Alexis Morillo
The 10 Memes That Defined 2022
By Alexis Morillo
Get Even More From Bustle — Sign Up For The Newsletter