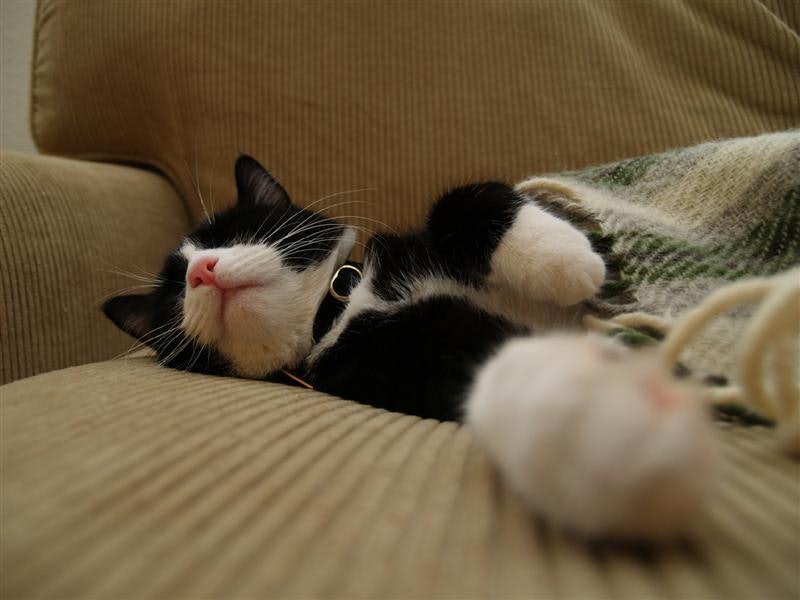 Is it just me, or is figuring out when to go to bed a lot more complicated that it seems like it should be? We know that not getting enough sleep tends to make you feel icky; on the other hand, though, so does getting too much sleep. At which point you're at in your sleep cycle when you wake up also has a lot to do with how well-rested you feel upon waking — so with all these balls in the air, what's an unfortunately unsuccessful sleeper to do? Well, good news: There's — you guessed it — an app for that. A web app, specifically; it's called Sleepyti.me, and it tells you when you should go to bed based on your waking time in order to get the best sleep you can. Awesome? Awesome.

Although Sleepyti.me popped up on Reddit just this past week, the tool itself is actually much older than that. We've seen it bouncing around for a few years — Lifehacker covered it in 2011, and The New York Times wrote about it in 2013 — but according to its creator, engineer David Shaw, he first made it five years ago purely for his own use. “I always woke up groggy, and one night I thought I'd be extra responsible and go to sleep earlier,” wrote Shaw when he stopped in at the Reddit post to share the background of Sleepyti.me. “You can imagine how frustrated I was when I woke up even more tired than my normal bedtime.”

After doing some research online and talking to some actual doctors and sleep scientists, however, he determined the cause of his frustrating grogginess: Sleep inertia. Defined as “a transitional state of lowered arousal occurring immediately after awakening from sleep and producing a temporary decrement in subsequent performance,” sleep inertia is often at its worst when you awaken abruptly from a deep sleep. So, even though you may have gotten more sleep than usual the night before, having your alarm wake you up when you're at a point in your sleep cycle when you're deeply asleep might result in you having a little bit of trouble getting going in the morning.

A number of sleep apps exist that work by tracking where you're at in your sleep cycle and wake you up somewhere during a half-hour window of your choice — specifically when you're sleeping lightly, so as to making waking a tiny bit easier. Sleepyti.me, however, doesn't track your body; it works backwards. You tell it when you want to wake up, and it tells you when you need to be asleep by in order to avoid sleep inertia. Shaw initially just figured out his optimal bedtime and waking time by doing the math, but the positive effects were noticeable — so noticeable that his friends asked him if he'd build a web app so they could try it, too. It's undergone a few redesigns since then, but clearly it's a success.

So how does it work? Easy. Here's the step-by-step process:

Obviously it helps if you know roughly how much time your morning routine takes here, so if you haven't got that down yet, it might be worth working it out first. For the purposes of this demo, let's say you typically like to be heading out the door and on your way to work at 8:30 a.m.: If your morning routine takes about an hour to accomplish, then you'd set your waking time for 7:30 a.m.

2. Hit “Calculate” To Figure Out Your Ideal Bedtime

And voila! It gives you a bunch of options based on the assumption that your sleep cycle is about 90 minutes long.

3. If You Have To Go To Bed Now And Need To Know When To Wake Up…

Sleepyti.me has you covered in that case, too. It's currently 9:45 a.m. as I write this, so the results are going to be a little wonky — but hey, let's pretend I work the night shift.

4. Hit The “Zzz” Button To Figure Out Your Ideal Waking Time

So now you know what time to set your alarm for. Perfect!

Head on over to Sleepyti.me to give it a shot. Not a bad idea for the work week, right?

More like this
How To Fight For Reproductive Rights, Based On How Much Time You Have
By Courtney Young
35 Sexy Texts To Send Your Partner
By Griffin Wynne and Carolyn Steber
6 Abortion Advocates To Follow On TikTok
By Sara Youngblood Gregory
The Best Underwear For Sensitive Skin, According To A Dermatologist
By Alexa Vazquez
Get Even More From Bustle — Sign Up For The Newsletter