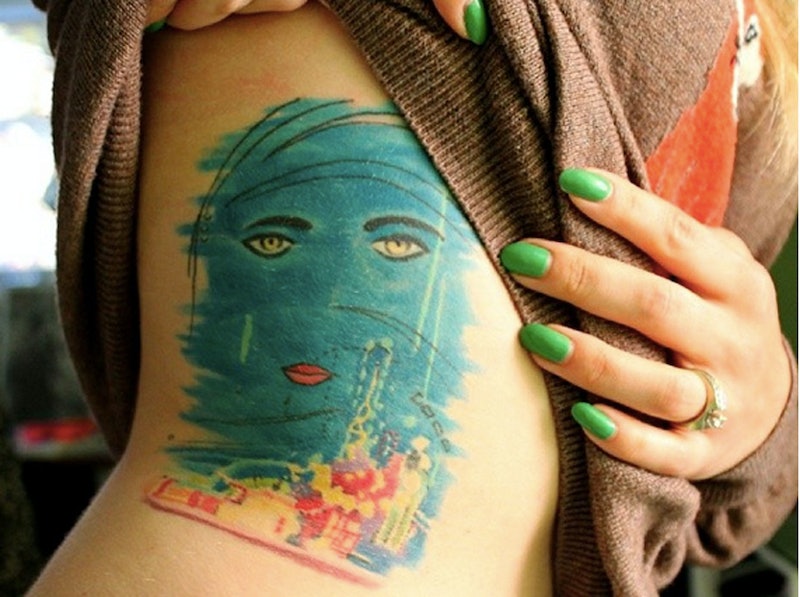 You've always been told not to judge a book by its cover, but when a book has a great one, it's pretty hard not to get caught up in it. For book-lovers, covers are so much more than just what wraps around the book, telling you the title and the author. Covers become T-shirt and tote bag designs. They're framed prints decorating office walls and throw pillows in the living room. Book covers are the face of birthday and anniversary cards, the journal you carry everywhere you go, and the planner you've had since college. Book covers, when they're done right, can go with just about anything — including your body.

There are a lot of different ways to profess your love for books through a tattoo, from one word tattoos to tats of your favorite literary character, but die hard book-lovers know that a book cover tattoo is the end-all and be-all. They honor the book, the author, and even the book's illustrators and designers. They're big and bold, and they tell any onlooker "I'm a book nerd, and I'm proud of it."

When your throw blanket and your journal, not to mention your bookshelf, just aren't enough to showcase your love for books and their packaging, here are 15 book cover tattoos that every book-lover will envy:

When it comes to Tolkien books, what couldn't you get a tattoo of? This artsy version of the cover, however, puts the rest to shame with its bold colors and three dimensional look.

The book itself is full of illustrations worth getting inked, but the cover of The Little Prince is an iconic image you'll appreciate decades after getting it tattooed on your body.

Another childhood classic, Norton Juster's The Phantom Tollbooth cover is probably one you have memorized from staring at it on your classroom's bookshelf. It looks just as beautiful on skin, too.

Of Mice and Men by John Steinbeck

Bright colors and intricate detail make the Of Mice and Men book cover not only gorgeous packaging, but a breathtaking tattoo as well.

If you want a book cover tattoo that makes a statement, look no further. This Farenheit 451 tattoo featuring the cover's illustration is everything you want in a tattoo: beautifully designed and timeless. Not to mention that it makes quite the statement.

There's a reason this cover image has stayed with the book for so long. Just as the images on it haunt Nick in the novel, they've haunted you for years, but in a good way. The way that makes you want a tattoo of it, of course.

The Mouse and the Motorcycle by Beverly Cleary

If you're like me, then you grew up learning to read with the help of Beverly Cleary books. This ode to The Mouse and the Motorcycle cover is a great way of saying thanks to everything the books have done for you, and it looks great, too.

Because everyone has a favorite fairy tale, a tattoo of the designed cover of one is something to drool over. You're childhood self is jealous already.

All My Friends Are Dead by Avery Monsen and Jory John

For the hipster book-lover in all of this, a modern tattoo of this hilarious and funky book is something you wish you thought of first.

Catcher in the Rye by J. D. Salinger

There are plenty of quotes from this book worth considering for a tattoo, but the cover says it all — even one without any words.

Where the Sidewalk Ends by Shel Silverstein

To go along with the tattoo of the illustration of the Giving Tree you probably already have, the cover of Where the Sidewalk Ends will make a great addition.

There are so many scenes from Carroll's childhood classic that are tattoo-worthy, but this cover design of a hardcover version has it all: magic, wonder, and, of course, Alice.

You loved it as a child, but do you love it enough to get it tattooed on your body? The answer is (probably) yes.

The Bell Jar by Siliva Plath

You might not recognize this cover design, which was what The Bell Jar looked like when it was published under Plath's pseudonym Victoria Lucas, but it's absolutely stunning — and probably a better fit for a tattoo than the more modern cover look.

Embrace your inner dreamer with this beautiful and intricate drawing from the cover of Don Quixote, a hilarious book about one of the oldest dreamers in the books.