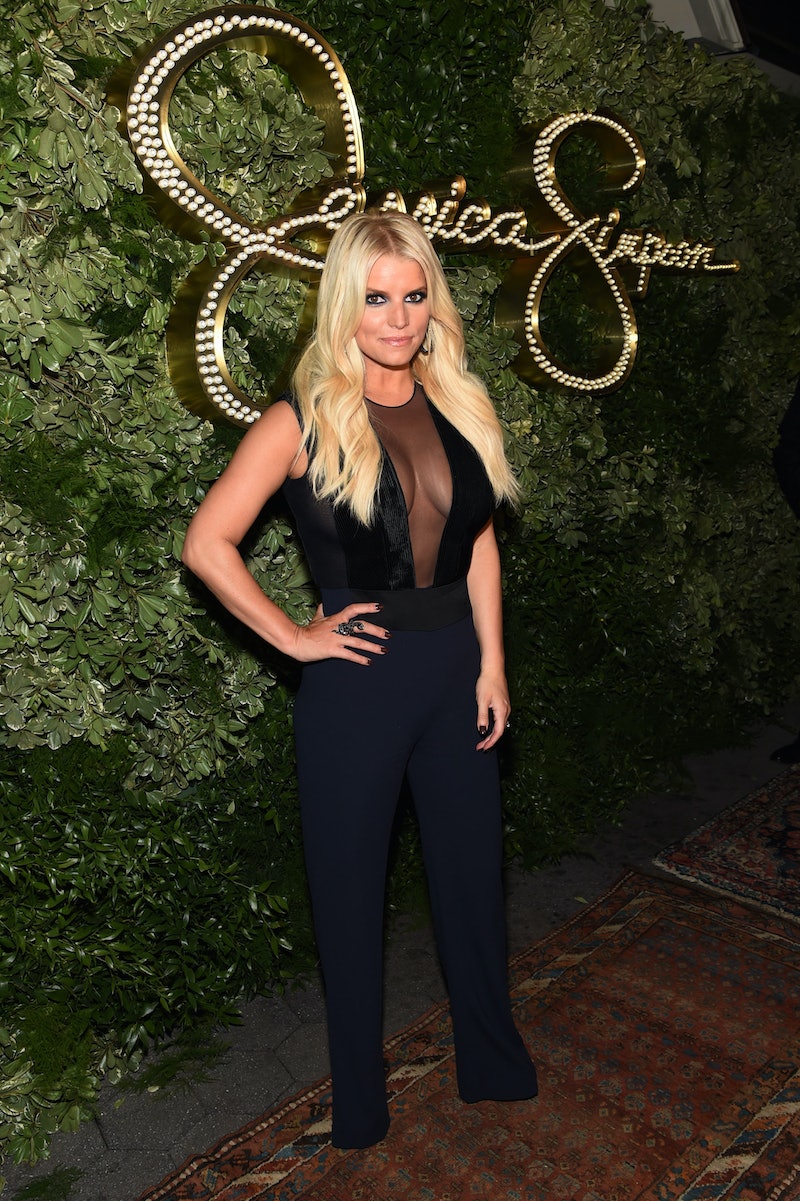 Marking a decade of amazingly fabulous entrepreneurship, Jessica Simpson celebrated 10 years with her namesake brand on Wednesday. Simpson has built a fashion, fragrance, and accessories empire around her name, officially establishing herself as a long-lasting fashion and retail icon.

Simpson is known for a lot of things: having quite a few hits in the early 2000s, perfectly rocking a pair of Daisy Dukes, not knowing the difference between chicken and fish, and of course, being absolutely gorgeous. But since the start of her career, Simpson has proved again and again that she's a girl boss.

She started her eponymous fashion brand 10 years ago, and, well, the rest is history. Since then, her wares have been stocked by major retailers such as Macy's represent, she has released multiple fragrances, and drew $1 billion in revenue. If that's not something worth celebrating, then I don't know what is.

Naturally, the pop star-turned designer hosted a party on the eve of NYFW to celebrate how far her design empire has come since its early days. And, even more naturally, she looked stunning at the event. Let's take a look at her outfit, shall we?

Wearing a black and navy jumpsuit with a plunging sheer neckline, Simpson looked beyond beautiful. While the neckline was definitely revealing, the classic jumpsuit silhouette kept it chic. Her long hair and dark eye makeup pulled the whole look together.

She also made an appearance on The Tonight Show With Jimmy Fallon wearing something very similar. But hey, if it's not broken, why fix it? She donned an Elie Saab jumpsuit embroidered with sequins and jewels, as well as featuring a wide leg and long sleeves. The jumpsuit was so pretty, it like it was made for Simpson.

In honor of her decade in the retail business, Simpson released a 10th Anniversary collection filled with stylish pieces covered in fringe and sequins, featuring amazing shoes, and, of course, that playful, fun vibe customers have come to know and love. I'm drooling all over each and every piece.

Here are seven times the brand absolutely killed it in years past, starting from the most recent. Successfully carrying out a business can be tough work, but it's clear that Simpson and her namesake label are in it for the long haul.

Look at that jumpsuit and tell me you don't want it on your body right this second. I guarantee you that Simpson's love of jumpsuits inspired this piece, and that fringe is such a cute added detail. Please and thank you!

Statement jewelry is a no-brainer for turning a casual outfit into a glamorous one. These coin-inspired jewels would certainly do the trick.

Animal prints are neutrals, right? That's why, if I had these pants, I would probably never take them off. Dressed up or dressed down, they're chic and stylish and adorable all at the same time.

Denim on denim, with a killer pair of heels — sounds like a perfect outfit combination to me.

You want your clothes to stand the test of time, and not just be "in" one season and "out" the next. It's clear that Simpson's brand does just that. I would totally wear this look from five years ago today. Just look how comfortable that sweater looks, and how chic the leggings are. Sign me up!

I'm pretty sure I've seen those shoes on someone regularly since 2009.

Simpson is originally from Texas, so her line features lots of country inspiration, which is clear from this early photograph for Elle magazine.