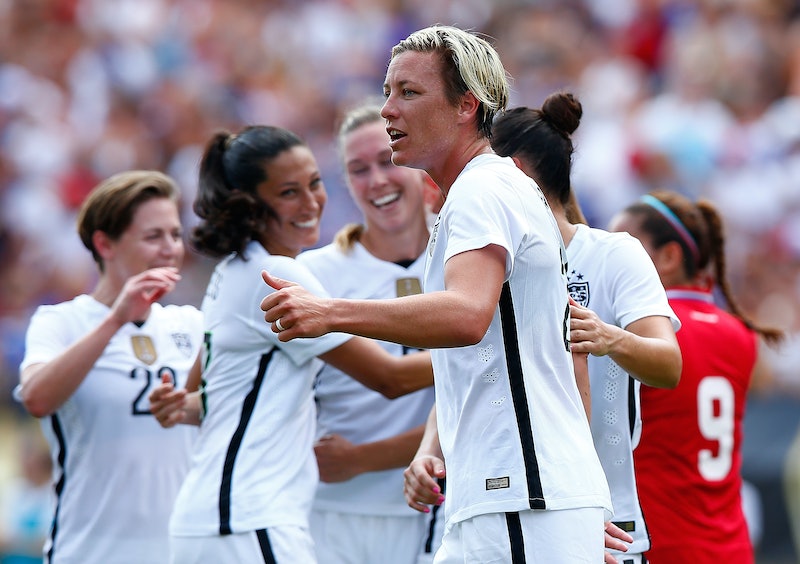 I was always pretty awful at sports; when I was a kid, I spent most of my time during youth soccer out on the field picking grass and doing cartwheels instead of playing the game. So I hope you don't this article as jealousy. But look: according to a recent NPR poll, 26 percent of parents hope their kids will be pro athletes someday if they start playing sports young. That number jumps to 39 percent in households that make less than $50,000 annually. Obviously it's great to have aspirations for your kids and to encourage their interests — but what happens when it's a parent's desire for their children to play sports, rather than the child's own desire? The results aren't good, and it turns out there's a name for it: Achievement by proxy distortion.

As you probably could guess, only a small percentage of athletes actually do go onto the pros — one in 168 high school baseball players, or one in 2,451 men's high school basketball players, according to the NCAA. But apparently, parents are telling themselves that their kids can beat these odds just by starting sports earlier. After all, practically starting from infancy helped sports stars like Tiger Woods and the Williams sisters — why not your little McKenzie or Reagan? Here's a typical exchange from one family taking this strategy:

"My dad gave [the nickname] to me when I was 3 years old," J.C. says. "I had just started playing baseball. And when I got my first hit, he just started calling me 'Little Legend.' "

His dad laughs, and adds, "I had to make sure that he was the goods first. I didn't just name him before I saw that he was pretty good."

I can't really begrudge parents, I guess, for wanting their kids to achieve greatness. On some level, we'd all like that for ourselves and kids. But I can't help but be reminded of the stress that undoes so many kids around competitive college admissions — and that's for schools that have a 10 percent chance of admission, making that dream literally more than a thousand percent likely to occur than getting on a Major League Baseball Team.

Like with college admissions, it's parents using their kids as a kid of status symbol, of course. But it's more than that, too. There's a weird kind of sweetness when J.C.'s dad says, "I'd love it if he went pro. I'd quit whatever I'm doing and just go be at every game." There will be lots of people picking on this dad, but he's clearly really proud and in love with his kid.

Apparently, this typical pattern of behavior is sometimes a condition doctors call "achievement by proxy distortion." It's getting your own ideas of success tied up with your children's, or some other proxy. And even with good intentions behind it, it can really hurt kids. They can grow up with anxiety and depression as a result.

A better strategy, if you want your kids to love sports? Make sure they're having fun right now.Go to their games. Don't yell at them if they do poorly, or if they perform cartwheels on the field. Have them feel the benefit of teamwork. Oddly enough, this may be a better path to the pros, anyway. "[Most professional athletes] played multiple sports when they were young," said Tom Farrey, the author of Game On: The All-American Race to Make Champions of Our Children, to NPR. "It was not about chasing the college scholarship or becoming a pro; they were just enjoying the games and falling in love with sports."

More like this
American Girl Doll Memes Are Going Viral On Instagram & Tiktok
By Emma Carey
Your Guide To July’s Full Buck Moon
By Brittany Beringer
This Viral TikTok Trend is Exposing Everyday Scams
By Sophia Moore
Here's Your Daily Horoscope For July 6, 2022
By Mecca Woods
Get Even More From Bustle — Sign Up For The Newsletter