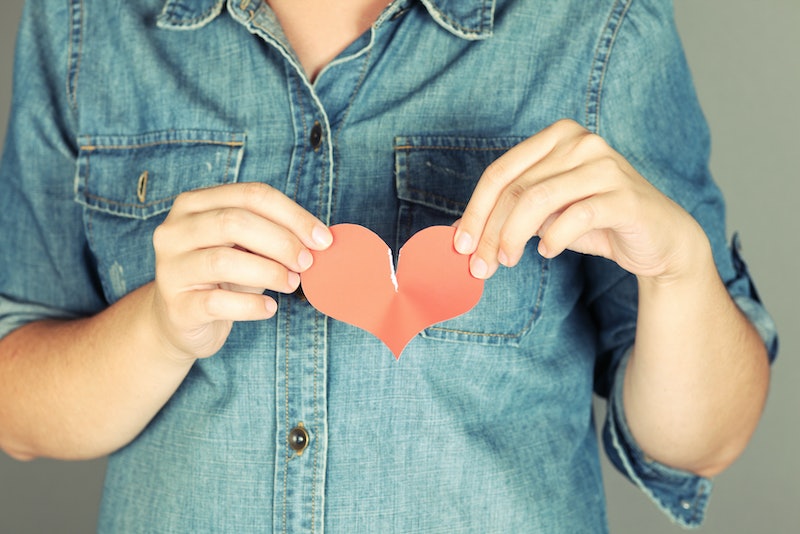 Hoo boy. Let's take a look at the latest social media trend masquerading as "empowerment" for Halloween: the #divorceselfie. We know the damaging, frustrating consequences of getting sucked into people's social media profiles as if they were realistic representations of themselves. But the truth is, social feeds are (often painstakingly) curated works of performance art, in which people are able to craft the story of their lives they want other people to believe with precision — be that constant vacations and food adventures, or mascara tear-streaked breakup selfies. It's cool as long as everyone remembers that social media versions of people are not reality. Not even your "woke up like this" makeup-free morning selfie is reality. It's softly lit, filtered, and you probably snapped 83 pics before choosing one your thought was beautifully ~au naturel~.

Most adults who grew up with varying degrees of social media access understand the separation between social media and reality. For children who are surrounded by it, however, and still developing an understanding of social constructs, it can be much, much harder to separate the idea that people's lives aren't exactly what they appear to be on Instagram. Which is why the divorce selfie is so sh*tty.

The concept behind the idea is couples snapping (mostly happy) selfies on the courthouse steps after their divorce has been finalized, proudly declaring how amicable their split is, pledging to stay friendly because they're #doingitforthekids, and otherwise curating this image of themselves as empowered, enlightened, mature, respectful, dream divorcés. All of that is great, except for one thing: it completely invalidates the emotions of their children.

The reality, for #thekids, is that their parents probably fought through their breakup, like most couples. Those children of divorce probably observed (or eavesdropped) screaming matches, ice cold freeze-outs, passive aggression, and all the other tensions of being in a room with a couple whose relationship is crumbling before everyone's eyes.

While snapping an amicable divorce selfie might make the couple feel better about their breakup, I question the claim that they're plastering big fake smiles on in the name of their kids. It probably doesn't feel amicable to their kids at all. Kids of divorce need to have their insecurity, anxiety, and stressful feelings validated by their parents in order to process and move past their grief. Of course, it's important for them to hear patented divorce adage "just because we're not in love with each other anymore doesn't mean we love you any less." But it's also important for them to hear, "It's OK if you're feeling mad, or sad, or upset, or confused right now." It's not the job of parents to mask those emotions or make them go away; it's their job to teach their children to experience them in healthy ways.

As anti-#divorceselfie child of divorce Nicolas DiDomizio writes at Mic:

"I'm glad my parents were honest with me about their messy divorce. I'm glad they didn't have social media to help them pretend it was anything less than shitty, and I'm glad I didn't have to be bombarded with confusing images of them laughing with each other in front of a courthouse as if everything was OK. I'm even glad I low-key stalked them during their epic late-night blowouts."

All the divorce selfie does is project to the social media world that everything is OK, no one's mad, and everyone is mature and levelheaded all the time. The truth is that no one is mature and levelheaded all the time in a breakup, and children of divorce experience that firsthand. It doesn't help them any to pretend otherwise, and the erasure of their feelings to make parents feel better is just straight up disrespectful.