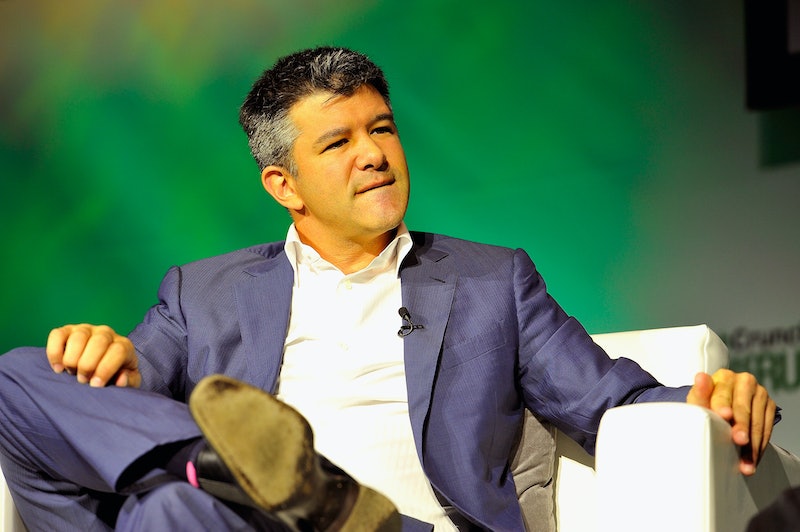 For his first week of hosting The Late Show, Stephen Colbert is making sure to feature prominent names from all industries. In addition to A-list actors like George Clooney and powerful politicians like Joe Biden, Colbert will interview Uber CEO Travis Kalanick on Thursday night. While Kalanick is undoubtedly a savvy businessman — Uber is valued at roughly $50 billion — he's not so savvy when it comes to making statements. It remains to be seen whether Colbert will grill the rideshare exec about his questionable past, or any of the many criticisms regularly thrust at Uber. For now, let's take a look at Kalanick's most regrettable quotes to jog our memories ahead of his Late Show interview.

Uber has consistently denied the many problematic reports of sexism within its culture, but they have been substantiated by the company's very own promotions, and even moreso by Kalanick's own words. At one point, a writer compared him to Charlie Sheen. (Which is when you know things have gotten bad.) Take a look at these five quotes that explain Kalanick in his own words. Not even Colbert's charm and wit can save him now.

Comparing Women To Businesses You Can Sell At Any Time

When asked if he would ever sell Uber in an interview with Vanity Fair, his response reflected his sincere dedication to his company — while simultaneously showcasing a knack for sexism:

You’re asking somebody who has a wife and is really happily married, "So, what’s your next wife going to be like?" And I’m like, "What?"

In case you were confused, Travis, you can't sell your wife to Google.

Stealing A Line From Charlie Sheen

Most adults with common sense think of Charlie Sheen and his "winning" as the ultimate example of how not to behave, but not Kalanick. During his interview with GQ , as he was boasting about his company's clever business model, he said:

If you can get a Prius for cheaper than a taxi, you just changed 100,000 people's lives in a city. If you can get it reliably? Holy shit. That's hashtag winning.

He Just Likes The Finer Things In Life

Is it so hard to highlight the strengths of your company's service without bragging about your own privileged life? For Kalanick, it seems impossible. He didn't even try to be subtle in a 2012 interview with Fast Company:

Uber is efficiency with elegance on top. That’s why I buy an iPhone instead of an average cell phone, why I go to a nice restaurant and pay a little bit more. It’s for the experience.

He Dismisses All Liability

In 2013, a woman tweeted at Uber, claiming that she had been choked by her driver. According to an email leaked to Gawker, Kalanick immediately emailed his PR team, blaming the media for suggesting that Uber is "somehow liable for these incidents that aren't even real in the first place," and then instructing them to "make sure these writers don't come away thinking we are responsible even when these things do go bad."

When asked how he came up with the idea for Uber, Kalanick told Fast Company:

It was a lifestyle thing. Me, my cofounder, and our hundred friends could roll around San Francisco like ballers.

If a movie ever gets made about Kalanick's life, Mark Wahlberg needs to play him.

He Just Wants To Be At A Club Already, Ugh!

When addressing the resistance Uber has faced from taxi companies and city commissioners in Miami, Kalanick told writer Mickey Rapkin:

I’m spending a lot of time with city officials in Miami when I would much rather be at the Shore Club. Or the SLS.

Not only would he rather be at the club poppin' Cris right now, but Kalanick is also really into hot tubs. According to early Uber investor Chris Sacca, the CEO can spend up to 10 hours in one. Not even the Situation likes hot tubs that much.

Kalanick has a penchant for making the most unnecessarily aggressive comments. During an interview at the Code Conference last year, Kalanick did not mince words about his greatest rival:

We're in a political campaign, and the candidate is Uber and the opponent is an asshole named Taxi.

And then he took off his shirt and challenged an audience member to a fight. (OK, that didn't actually happen, but nobody would have been surprised.)

He Actually Said The Word "Boober"

Because he's apparently a 15-year-old boy trapped inside the body of a 39-year-old, Kalanick said this to GQ about attracting woman on demand:

Yeah, we call that Boober.