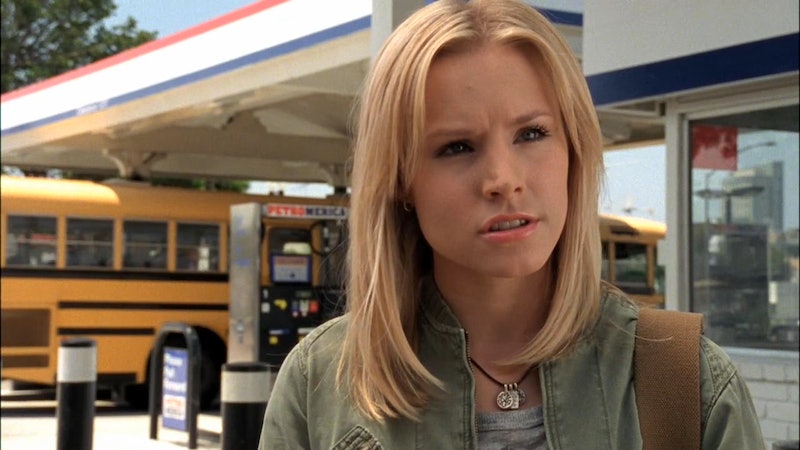 There are few shows that I hold quite as dear as Veronica Mars, and like most fans, I'll always remember my passion for the show in connection to the murder of the titular character's best friend Lilly Kane. Lilly's suspicious death was what sent Veronica into a private investigator spiral, unwilling to let her questions go unanswered, and ultimately was what set off a series of events that would change Veronica's life — and the lives of the other Neptune residents — forever. The great Lilly Kane mystery solidified Veronica Mars as a series that would go places few teen television shows would, and plenty of critics felt that Veronica Mars' first season mystery was the best. That might be the case, but praise for the first season of Veronica Mars often makes people forget about how truly excellent the Season 2 mystery was — because it deserves just as many accolades as Season 1's twisted arc.

Unlike the first season, it wasn't a very personal murder that kicked off Season 2. Instead, the series opened with a devastating bus crash that would claim the lives of nearly everyone on board. Veronica makes it her mission to find out who was responsible for the crash and why, and in doing so finds out plenty of disturbing secrets about her fellow Neptune residents.

So why was the Season 2 mystery so strong? Here's what made Veronica Mars' sophomore year mystery the one to watch:

There Were Plenty Of Smartly-Crafted Red Herrings

It's not easy to have a 24-episode season that leads up to an ultimate conclusion of one mystery: red herrings are necessary to fill a full-season order. Season 2's mystery, which wasn't particularly personal to Veronica, allowed for plenty of new characters to be suspected of the heinous crime, but while not everyone was responsible for the bus crash, they did all provide an important piece of the puzzle. Woody, Neptune's new mayor, may not have been the ultimate villain in the sense that he didn't set the bombs off on the bus, but his heinous actions did provide motivation for the real killer.

Who would have thought that Dick's younger brother would be revealed as the culprit behind a mass murder? Most people wouldn't see this reveal coming from a mile away, but the show certainly dropped plenty of clues about Cassidy's true mental state. Veronica's perpetually picked on classmate turned into the show's tragic villain after his horrible childhood backstory was revealed, but it never felt completely out of left field: it simply peeled back layers on a character we had known in a very different context.

The Mystery Is Deeper Than Ever Expected

Like Veronica and Logan's love, this mystery spanned "decades," leaving "lives ruined and blood shed." The Season 2 mystery not only connected to a horrific crime committed against children nearly a decade prior, but also had ties to what happened to Veronica at the party where she was drugged and raped just after Lilly's murder.

Half The Mystery Was Finding The Right Clues

The person who set the bus crash in motion may have committed murder, but it wasn't a personal murder: there was no way to tell who the culprit really wanted to get rid of or why. That meant that every possible avenue had to be explored: who had it out for who? Was Veronica the person that the killer really wanted to get rid of? The multiple victims gave way for plenty of mystery to untangle and even more secrets to uncover.

Lilly's murder mystery may get all the attention, but when we're remembering the late, great Veronica Mars, let's not write off the bus crash: this story had more than enough twists and turns to hold our attention up until the very last reveal.

More like this
Wait, What’s Going On With Ben In That Umbrella Academy Season 3 Post-Credits Scene?
By Gretchen Smail
Everything You Need To Remember Before Westworld Season 4
By Brad Witter
Here's Why You'll See Less Of Olivia Rodrigo In 'HSMTMTS' Season 3
By Bustle Editors
Everything To Know About 'The Undeclared War' Season 2
By Rachel Mantock
Get Even More From Bustle — Sign Up For The Newsletter