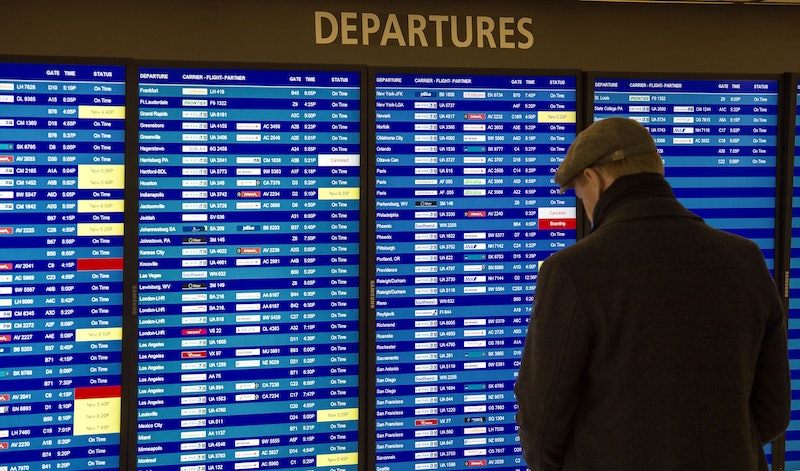 It's been 14 years since the terrorist attacks of Sept. 11, 2001, and an awful lot has changed in those intervening years — we've fought wars, seen widespread government surveillance programs crop up, and yes, seen security at the airport intensify dramatically. In fact, though it might be the mildest of the changes society's undergone as a result of the attacks, for most people, taking a plane flight is the most obvious brush with America's post-9/11 "new normal." Here are five ways that airline travel has changed since 9/11, because they sure take things more seriously now.

Some of these new rules and new norms might be contentious, there's no doubt. And nobody loves having to pull their shoes off in the middle of a security line. But this is stuff that we're all expected to endure without complaint, in order to make the flight a safer, more secure experience. In the years following 9/11, it was revealed that some of the hijackers successfully passed through airport security despite setting off the metal detectors at the checkpoint. By today's heightened standards, this seems equal parts unthinkable and incredible. Here are five ways that flying has changed oh-so-much since the pre-9/11 era.

Back before the 9/11 attacks demonstrated how powerful even a box-cutter could be in the hands of a determined hijacker, you used to be able to take pocket knives on planes, provided they were less than four inches long, as well as scissors. That all changed in the aftermath of 9/11, however, with an outright ban on blades in-flight. In other words, check your pocket knife, and your razors, too.

In 2013, the TSA actually wanted to change this policy, allowing blades of an even-smaller size than before onto planes. But the plan was ultimately scrapped, having generated a fair amount of controversy and negative feedback.

Everybody pretty much knows this one, because in addition to being frustrating, it's oddly specific — as the TSA website details, you can't get through an airport checkpoint in the United States without observing the following liquid restrictions.

You are allowed to bring a quart-sized bag of liquids, aerosols, gels, creams and pastes in your carry-on bag and through the checkpoint. These are limited to 3.4 ounces (100 milliliters) or less per item. Placing these items in the small bag separate from your carry-on baggage facilitates the screening process. Pack items larger than 3.4 ounces or 100 milliliters in checked baggage.

What that means, in plain English, is that you can bring a bunch of sub-3.4 ounce liquid containers, as long as they all fit inside a single, quart-sized bag. The primary reason for the rules is to protect planes and passengers from liquid-based or liquid-activated explosives, something that security officials have been voicing public concern about for many years.

In the event you trigger an alarm while going through security, or if you can't or won't go through the body-scanner and metal detector, you might be told you have to undergo a pat-down. This is by far one of the most controversial new realities of airline travel, and has generated countless complaints — two TSA employees at the Denver International Airport were fired in April for allegedly conspiring to grope selected passengers, for example.

That's not to say all pat downs are fueled by vulgar intent, to be clear, but there's probably no other single post-9/11 security measure that's quite as invasive as this one.

To be clear, there's probably never been a time in aviation history when "my bag has a bomb in it" was a very stellar joke. But nowadays, it's no small thing to make this kind of security-tweaking wisecrack — sometimes, entire airports get gridlocked by this sort of thing. Whether that seems sensible or not, it's simply a reality: If a TSA agent hears you making jokes about bombs in your bag (hell, bombs anywhere on your person), you've probably just ruined your trip, to say nothing of anyone else who gets delayed.

Yes, that's right — the TSA didn't even exist prior to 9/11, which is the biggest, overarching reason we're seen so much change. The TSA was formed through the passage of the Aviation and Transportation Security Act back on Nov. 19, 2001, just over months after the fateful day.