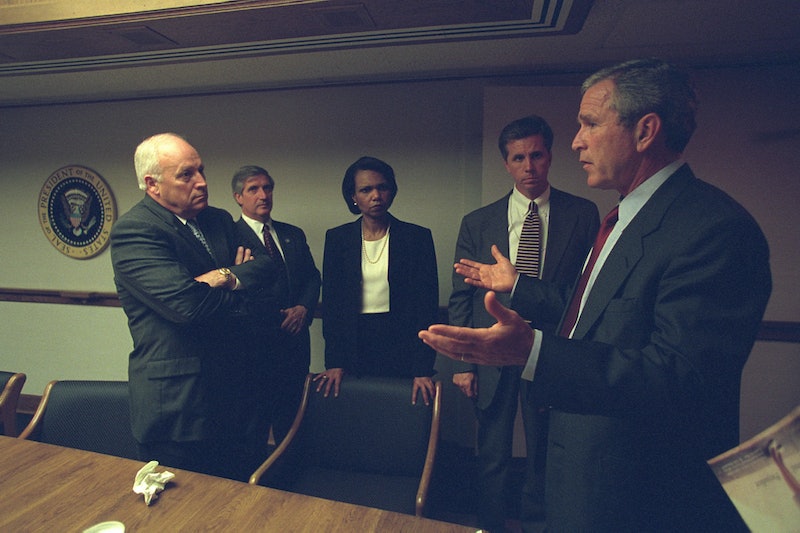 Earlier this week the George W. Bush Presidential Library released a batch of previously unseen White House emails from 9/11 to The New York Times. The emails, which span from the early morning of Sept. 9 to that night, provide a unique behind the scenes look at the administration's first response. Though there are gaps in the correspondence — which, according to The New York Times, is for security reasons — they are still effective at capturing the shock and horror of the day.

As we all remember, Bush wasn't in Washington, D.C., that morning. Instead, he was reading to elementary students at a school in Florida and preparing for a speech on education later that day. His staff was similarly engaged in the usual daily routine. A little past 5:30 a.m., Karl Rove, a senior advisor, sent an email asking an aide to send him the news reports for the day.

John McConnell, a White House speechwriter, planned an upcoming meeting, while an aide drew up speaking points for the president's speech later. At 8:42 a.m. Karen Hughes, the president’s counselor, received an email requesting an interview with the president.

But at 8:56 a.m., the most chilling email of the day was sent by Tucker Eskew, the media affairs director. "Turn on CNN," Eskew wrote.

As we now know, that email came approximately 10 minutes after the hijacked American Airlines Flight 11 hit the north tower of the World Trade Center. Less than 10 minutes after Eskew's email, United Airlines Flight 175 hit the south tower. The shock is evident in the next few emails — two emails were sent out between 9:03 a.m and 9:11 a.m. to cancel that day's meetings.

But from that point on, there are gaps in the emails sent from the White House. Part of this is may be due to security concerns, but it is also likely as a result of American Airlines Flight 77 crashing into the Pentagon. According to CNN, by 9:45 a.m., the White House had begun to evacuate.

At this point, messages of concern began pouring in as White House staffers checked in with loved ones. Around noon, one aide received an email reading, “Are you safe? Hard to fathom what’s going on today. Hope you and [sic] safe and sound.”

Throughout the day Hughes received an update from one of her aides informing her that three of her colleagues were safe, as well as an email from her pastor.

Dear Karen, I am in disbelief. You are in my prayers as is the president. I realize that were a country behind this, we would now be at war. We have services today at 12:45 and 5:30. We will keep you in our prayers. I am attaching some notes from my meditation on Psalm 23. I love you, Doug.

National Security Advisor Condoleezza Rice received an email from the chief security official for the European Union. “All my solidarity and friendship today. Javier," Solano wrote.

As The New York Times points out, none of the emails give detailed descriptions about the environment and mood of the day, though they do showcase a resolve and determination, such as in one email exchange between White House aide Clay Johnson and his sister.

A little after 5 p.m., Johnson emailed his sister to tell her he had just gotten back from the bunker. "Unbelievable," he wrote.

“Are you feeling secure there?" Johnson's sister asked.

The emails also give insight into the process of drafting Bush's statement. Although the president had left Florida right before 10 a.m., due to security concerns he did not return to the White House until almost 7 p.m. Shortly after, he addressed the nation.

The last email, sent to Hughes from Stuart Bowen, the deputy White House staff secretary, reflects on Bush's speech. “The speech was extraordinarily good," Bowen wrote. "Even more impressive is that you wrote it under unprecedented constraints, given the time and nightmarish circumstances involved.”

These emails, paired with several photos released by the National Archives in July, work together to give Americans a fully understanding of the Bush administration's response 14 years ago. The expressions of shock, disbelief, and heartbreak humanize the staffers as they were so similar to our own individual responses.