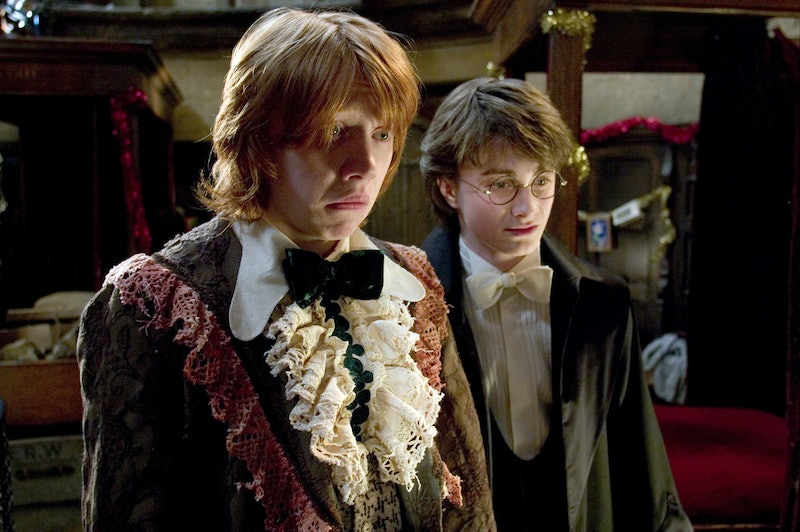 Harry Potter has it all: adventure, the struggle of good versus evil, magic spells and enchantments, and, of course, romance. Sure, we were all very concerned about whether or not Harry was going to destroy all the Horcruxes and defeat Voldemort, but we were also rooting for our favorite couples at the same time.

Don’t try to pretend that you didn’t have a thousand crushes while reading the series, because let’s be honest here: we’ve all had our fictional favorites. I can still remember when I saw the first movie in theaters, and I totally swooned over the terrible yet dreamy Draco Malfoy (when he stole that Remembrall — he stole all our hearts, am I right?). And of course I loved Ron and Harry as well, because why limit the fictional crushes?

It’s obvious from the heaps of fanfiction, heartthrob-style posters, and just the general hullaballoo surrounding the characters of Harry Potter, that all readers have their favorites. Maybe you’re also a Tom Felton fan, or maybe you’re aboard the Viktor Krum express (don’t even get me started on the greatness that is Viktor Krum). Whatever train you’re on (or ship you’re sailing), your Harry Potter crush actually reveals quite a bit — about you.

You're super passionate about everything you do, and you take pride in the fact that you often notice details that others don't. Such as how fine Oliver Wood is.

You appreciate wisdom, Zac Efron posters, and long beards, and you have a thing for lemon drops.

First of all, you're a Hufflepuff and you're proud of it. Second of all, you appreciate fairness and justice in all of your endeavors. You find that a little kindness goes a long way, and consider your friendships of the utmost importance. Also, you went to all the midnight premieres of Twilight, and you had a blast.

You really, really love animals. If there's a dog in the room, you can't focus on anything else, because you just want to pet that dog. But animals aside, you're the best friend ever, because you'll always stand by those you love. No matter what.

You're hilarious and opinionated, and you appreciate people who are the same. Most of your friends have a great sense of humor, and you don't take things too seriously. You're also a bit of a performer, and go kind of crazy when there's a microphone in your hand, so watch out if there's karaoke or open mic comedy — you'll be onstage.

You've got a thing for guys who drive motorcycles and wear black leather jackets and give off a super James-Dean vibe, and you'd love for one of them to take you on a crazy adventure. But they won't be able to tie you down, because you're also a pretty free spirit when it comes down to it. However, you are intensely loyal to your friends, and excellent at keeping secrets when you need to. Similar to those who crush on Hagrid, you also really love dogs.

You like to follow the rules, but you know that sometimes rules were meant to be broken. Usually, you're the voice of reason in your friend group. You know what it's like to be an outsider, so you are extremely compassionate toward others, and you also value knowledge and learning. You would also prefer not to go out on nights when there's a full moon.

Knowledge and cleverness are your favorite qualities, and you're rarely seen without a book in your hand. Your favorite people are the ones who can have long, in-depth discussions about literature, and nothing makes you more excited than hearing that someone shares your favorite book. If someone used a book quote as a pickup line, it would definitely work on you, and you often have to remind yourself that the events in a book didn't actually happen to you. Also, one of your goals is to meet Emma Watson, and you just know it's going to happen someday.

First of all, you're super cool, but you don't have to try at it — you're just that fantastic. You radiate confidence, mostly because you're totally fine with laughing at yourself. You love people with a sense of humor, especially if they can keep up with your quick wit. You've also been known to pull pranks every so often, and the phrase "better to ask forgiveness than permission" is your official motto. Also, you've sent or have considered sending someone a toilet seat in the mail.

You have a thing for bad boys, but you only like them if they secretly have a heart of gold. You're constantly traveling, and you love seeing new places and having new experiences. When you look for friends, you look for people who can appreciate you for who you are. Overall, you're a consistently genuine and down-to-earth person, and you always do the right thing even in difficult situations. Also, you would totally love to go to the Quidditch World Cup.

You know that the best things come to those who wait, because hello Matthew Lewis. Not only are you patient, you're also kind-hearted and endlessly empathetic. One of your favorite sayings is, "never judge a man until you've walked a mile in his shoes." You're also really into gardening.

As with those who crush on Neville Longbottom, you're a very patient person. Some consider you the girl next door, but you know that the best things in life are classic and never go out of style.

You love to laugh, and your favorite people are the ones who make you feel at home and welcome. You're probably wearing comfy pajamas right now, and your favorite day is one spent relaxing with your best friends. Family and loyalty are super important to you, and you don't get caught up on the superficial.

At your core, you're a hopeless romantic. You can't help rooting for romances you know are doomed, and you're the kind of person who always thinks you can change people. You're able to see past the masks that people wear, and you never give up on them because you want to believe that everyone has the potential for good. You may or may not have a tattoo that says "always."

When people think of you, they think "quirky." You listen to a lot of obscure music and have pretty unique hobbies, so when someone shares those interests, you're psyched to have found a kindred spirit. Sometimes you can be pretty quiet, so you appreciate people who take the time to get to know you and aren't put off by an eccentric demeanor.

You have a thing for bad boys and bleach blond hair, and you may or may not have read Dramione fanfiction. But seriously, you've known who you are and what you want from an early age, and you've always been a bit of a thrill seeker, even if that thrill is laced with a bit of danger.

You usually think of yourself as the protagonist, but hey — who doesn't? You're a Gryffindor through and through, and you regret deeply that you can't play Quidditch, because you would have given Harry a run for his money. Sometimes you can come off as a little full of yourself, but you're loyal and personable and have a set view of right and wrong, so your friends love you anyway.

You are Gilderoy Lockhart.