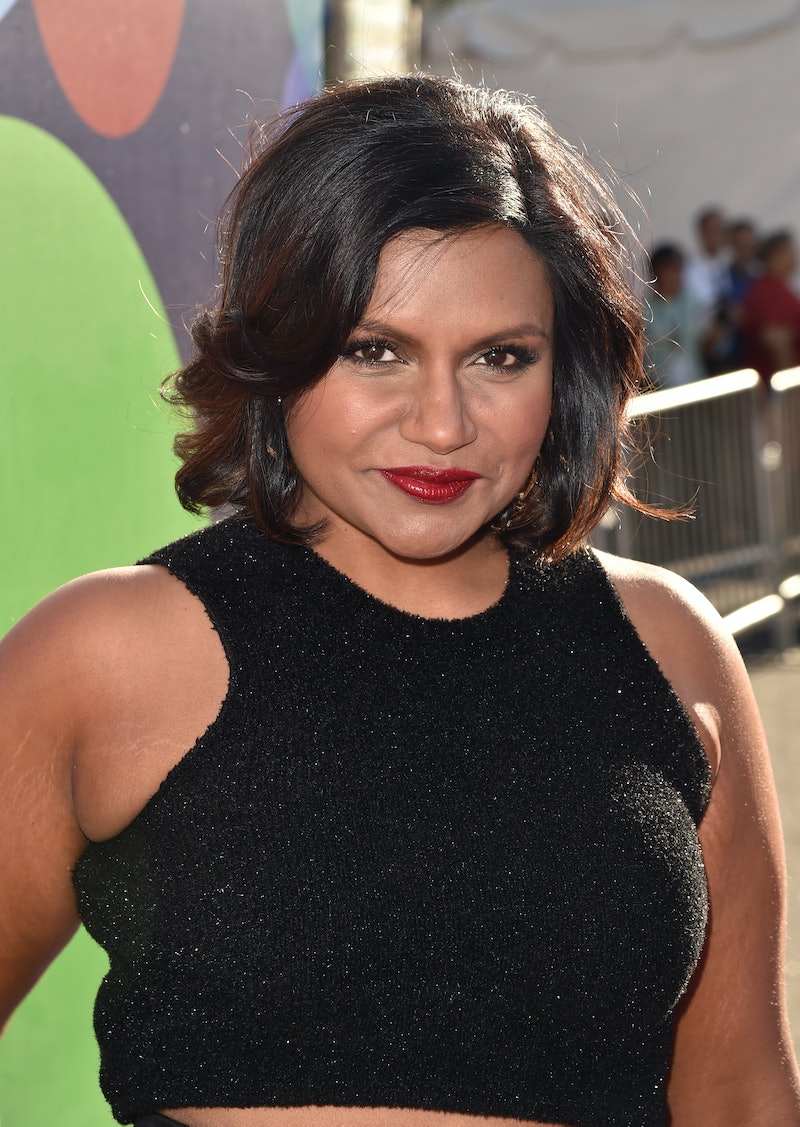 Sorry T. Swift fans, but if I could be in anyone's girl squad, it would be Mindy Kaling's. We'd stay up late watching Lifetime movie specials and sharing and extra-large, extra-cheesy pizza. We would tweet jokes back and forth (you know, like she and B.J. Novak do), and whenever we were at an awkward dinner, we'd secretly text each other from underneath the table. Maybe she'd even bring me to the Emmys as part of her red carpet crew, where she'd thank me in her speech for being the best BFF a girl could ask for. Yes, I am a total fangirl, but I can't help it.

In The Office, Kelly Kapoor said everything I wished I could say but never could, and Mindy Lahiri is basically my idol. Mindy Kaling herself is not only charming and hilarious, but she's honest, relatable, and one of my personal style icons. When I read Kaling's book, Is Everyone Hanging Out Without Me? And Other Concerns , I felt like I got to know the writer, actress, and producer, among other things, a little better. She shared her thoughts on dating, told the story of her rise to fame, and even gave some advice of life, love, and careers.

As I eagerly await the arrival of my pre-ordered copy of Kaling's next book, Why Not Me? , which comes out Tuesday, I got to wondering: What is on Kaling's reading list? It might not surprise you to find out she loves Gwyneth Paltrow 's cookbook, My Father's Daughter, and Tina Fey's Bossypants, but here are 11 other books Mindy Kaling loves that you probably will, too:

Harriet the Spy by Louise Fitzhugh

In an interview with EW , Mindy Kaling shared her love for the classic children's book Harriet the Spy. Like most young girls, Kaling could relate to Harriet's awkwardness in appearance, but admired also her adventurous spirit and undeniable confidence. Kaling even professed she wished she'd tried out to play Harriet, and I think we can all safely say we do to. Wouldn't she make the best sleuth ever?

House of Mirth by Edith Wharton

Mindy Kaling had to read for school just like the rest of us, and she told EW that her favorite required reading was Edith Wharton's House of Mirth. Despite being written at the beginning of the 20th century, Kaling found the characters and their struggles modern, saying "that book completely changed my life." Is there higher praise than that?

On the TODAY Show , Mindy Kaling sat down with former President Bill Clinton, and the two shared their favorite books. Maybe unsurprisingly, their lists were vastly different, but topping Kaling's is 11/23/63, Stephen King's novel about a time traveller who tries to stop the assassination of John F. Kennedy. Just as I suspected, everyone has a favorite Stephen King book.

The Marriage Plot by Jeffrey Eugenides

The Marriage Plot was on everyone's must-read list circa 2011, and was named one of the year's best books by NPR, The New York Times Book Review, Salon, Publisher's Weekly, among others. Who else calls this a must-read? Mindy Kaling included Jeffrey Eugenides's novel as one of her top picks. If you haven't read it yet, this should be the final push you need to finally get around to it.

The Art of Fielding by Chad Harbach

Another of Kaling's top books according to her list for TODAY, The Art of Fielding, chronicles the complicated lives of five people as they navigate their hopes, dreams, loves, and losses. With plenty of drama and even more heart, it's obvious why Kaling would count this as one of her favorites.

What to Wear, Where: The How-to Handbook for Any Style Situation by Hillary Kerr and Katherine Power

How does Mindy Kaling look so stylish all the time? It could be thanks to one of her favorite books, What to Wear, Where, a guide to dressing up for any situation. The book features tips, fashion dos and don'ts, and resources meant to make the reader feel more confident when they wear anything. So that's how she does it!

Interpreter of Maladies by Jhumpa Lahiri

House of Mirth isn't the only book that changed Kaling's life. Interpreter of Maladies, Jhumpa Lahiri's breathtaking collection of nine short stories, also had a profound effect on her, as she shared with TIME . Did you also know that her titular character of The Mindy Project, Mindy Lahiri, is named after Jhumpa Lahiri, and is supposed to be a distant cousin of the author? That's die-hard fandom, and I'm glad even Kaling has fangirl moments, too.

The Girl in the Green Raincoat by Laura Lippman

In her By the Book interview with The New York Times , Mindy Kaling admitted that one of her favorite genres is crime writing. Among her favorite authors of the genre is Laura Lippman, who writes the Tess Monaghan crime novels. The Girl in the Green Raincoat, one of Kaling's top picks, is a short novella in the spirit of Alfred Hitchcock's Rear Window. Like the film, it's creepy, suspenseful, and should be added to your "must" list.

If you were a total book-nerd as a child, then you were in good company. Mindy Kaling told the NYT that she used to stay up past bedtime reading books like Michael Crichton's Sphere, the sci-fi thriller about a mysterious vessel found on the bottom of the sea floor and the mysteries found inside of it. Don't worry, Mindy, we'd stay up late reading it, too.

Department of Speculation by Jenny Offill

You aren't the only one getting ready for the new season of The Mindy Project. Kaling says she has Dept. of Speculation on her nightstand, and she reread it as preparation for her role as a new mother on her show. Personally, I can't wait to see how this hilarious, original book effects Kaling's performance.

Watch Me: A Memoir by Anjelica Huston

Everyone loves a good celebrity memoir, including Mindy Kaling, who has Anjelica Huston's on her nightstand alongside Dept. of Speculation. "I can’t believe how good her stories are," Kaling gushed over the book, also calling it "delightful." Who wouldn't want to read those crazy stories featuring Jack Nicholson before bed, right?