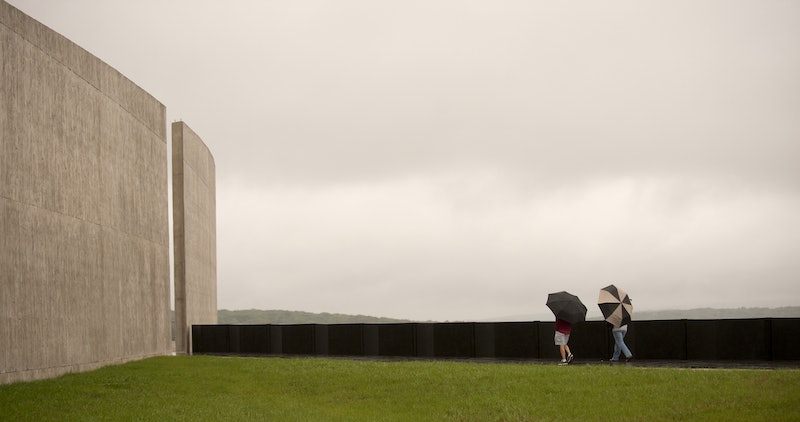 Friday marks the 14th anniversary of the Sept. 11 terrorist attacks — a quiet Tuesday morning in 2001 that soon became the largest attacks on U.S. soil in recent history. Around 9 a.m. on Friday morning, memorials and moments of silence were held at the World Trade Center in New York, where the famous Twin Towers once stood. Memorials also took place in the Washington, D.C. area, including at the Pentagon, where the hijacked American Airlines Flight 77 crashed into the massive building, killing 184 people in all. And in a field near Shanksville, Pa., mourners gathered to remember the passengers of United Airlines Flight 93, the plane believed to be bound for another U.S. landmark that was brought down by the brave passengers.

President Obama did not make any public statements on Friday, but he did post a short tweet Friday morning following the moment of silence. "14 years after the terrorist attacks of 9/11, we honor those we lost," Obama tweeted. "We salute all who serve to keep us safe. We stand as strong as ever."

Many politicians, including House Speaker John Boehner, released statements on Friday commemorating the 14th anniversary of the devastating terrorist attacks. "Like most Americans, I'll never forget where I was when I heard about the first plane on September 11," Boehner tweeted.

In Washington, D.C, Friday morning, President Obama and Michelle Obama led White House staffers outside on the front lawn to hold a moment of silence at 8:46 a.m. Following the moment of silence, a Marine Corps bugler played "Taps" as the Obamas held hands, according to The Hill.

Flags at the White House, the Capitol, and other federal building were also lowered to half-mast at 8:46 a.m.

At the Pentagon, located in Arlington, Va., a flag was raised early Friday morning on the side of the building where American Airlines Flight 77 struck. More than 100 Pentagon employees were killed on Sept. 11, 2001, when the hijacked jetliner crashed into the building.

Relatives of the victims gathered at the Pentagon memorial for a private service at 9:30 a.m. Friday morning. A moment of silence was held at 9:37 a.m., the exact moment when Flight 77 hit the building.

A moment of silence was also held at the Ronald Reagan Washington National Airport in Arlington County at 8:46 a.m. Friday.

The family of the victims of ill-fated United Flight 93 traveled to the field in Shanksville, Pa., Friday morning. A new memorial center and wall of names for United 93 just opened there on Thursday, when a separate dedicated honoring the victims was held.

But on Friday, mourners huddled under umbrellas for the 14th anniversary ceremony, during which the names of the 40 passengers and crew were read. Secretary of Homeland Security Jeh Johnson attended the ceremony, and delivered powerful remarks following the reading of the names and ringing of the bells to symbolize their loss.

“The passengers did the most American of things: They took a vote. They voted to fight back whatever the cost,” Johnson said.

Giuliani, who was mayor of New York City at the time of the terrorist attack, told WPIX-TV, "The resiliency of New York is amazing. It's a defense against these terrorists who think they could crush us."

Early Friday afternoon, Biden and Cuomo will be joining the 9/11 Memorial Motorcycle Ride, which honors first responders. The ride departs from Jones Beach on Long Island and ends in New York City.

Meanwhile, Christie appeared on Fox News Friday morning and told a personal story about how he feared his wife, who was working near the World Trade Center, was missing hours after the attacks. "I was on the phone with her after the second plane hit," Christie said. "We went five-and-a-half hours without speaking to each other. … It was incredibly frightening."

Elsewhere around the United States on Friday, politicians such as 2016 GOP presidential candidate Jeb Bush and Maryland Gov. Larry Hogan attended smaller anniversary ceremonies. "We should all take time today to pay tribute to the victims of 9/11, their families & the troops who've kept us safe," Bush tweeted.

More like this
The Families Of Grenfell Tower Are Still Waiting For Justice, Five Years On
By Bustle UK
Here’s How Lizzo Is Supporting Abortion Rights After The Roe v. Wade Reversal
By Brad Witter
How To Fight For Reproductive Rights, Based On How Much Time You Have
By Courtney Young
Boris Johnson’s Leadership Is In Question – Again
By Bustle UK
Get Even More From Bustle — Sign Up For The Newsletter