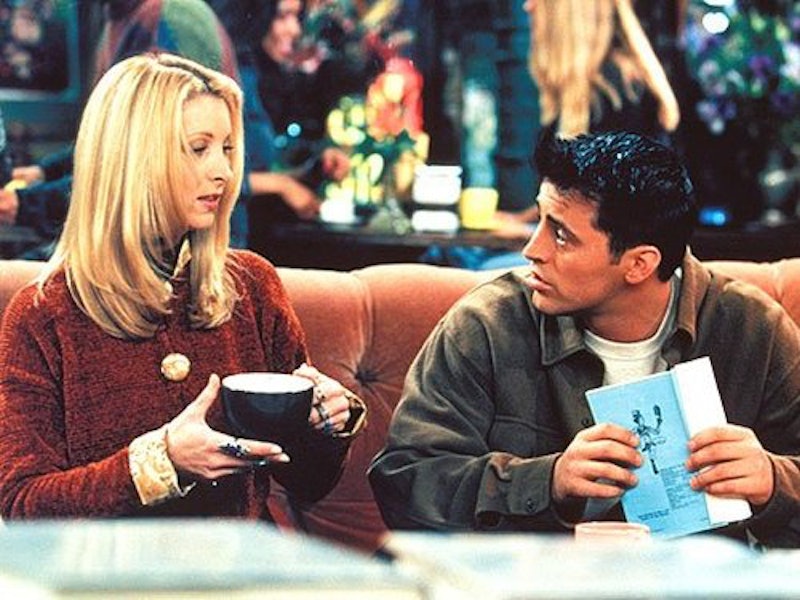 If you, like me, wake up every morning with a burning question about Friends in your brain, even 11 years after the finale, then you have probably spent some time wondering why Phoebe Buffay and Joey Tribbiani never hooked up. That's the query that's on my mind, and, luckily for me, Lisa Kudrow and Matt LeBlanc recently gave an interview to People addressing just that. Over the 10 seasons the show was on the air, they tried out pretty much every possible romantic combination of the friends, whether in real-life episodes or "what if" flashbacks. Minus Monica and Ross, who were never going to get together on account of being full-blooded siblings and all that, it turns out that Monica and Phoebe are the only Friends characters who haven't kissed. Pretty wild.

So there were a lot of pheromones floating around, and you would've thought that, at some point, some of them would stick to Phoebe and Joey, since they were both such sex-positive, low-commitment, free spirits! More than any of the others, they seemed destined to drift together in some way, but it never quite happened. But apparently not for lack of trying on LeBlanc and Kudrow's part! When asked why they never coupled up, LeBlanc had this to say:

Towards the end we actually pitched the idea that Joey and Phoebe had been having casual sex the entire time. We'd go back and shoot all the historical scenes and just before a moment that everyone recognizes, there's Joey and Phoebe coming out of a broom closet together. But they were like, 'Nah.'

Oh my god. I would have loved that so much. But, just because their pitch was turned down doesn't mean that the two actors weren't consciously or otherwise working in little hints that they were (or at least could be) an item over the years. Think about it! Phoebe and Joey actually kissed quite a bit, and were always pretty open about enjoying it, whether it was when they locked lips while Phoebe was pretending to be her twin sister Ursula, whom Joey was dating at the time...

...when Phoebe pressed her chest up against Joey to avoid having to give him an insincere compliment for his terrible new show...

...when she helped him prep for a role by making out with him, and then frankly assessing his skills...

...or when they casually discussed hooking up, since all their friends were too.

Across the board, their chemistry is so evident that it's inspired whole YouTube montages offering proof of why they belong together.

And, now that I've read this interview telling me that the actors who played the characters not only agreed, but have since the beginning, I'll probably never look at the series the same way again. And not in a bad way, either! If anyone could have a truly "friends with benefits" situation without letting it intrude on their deep, loving friendship, it's Phoebe and Joey.

So this is how I'm imagining these two from now on, and there's nothing you can do to stop me, because Lisa Kudrow and Matt LeBlanc said it was okay.

More like this
Here Are All 703 Outfits Rachel Wore On Friends
By Kat George
Courteney Cox Recreated An Iconic 'Friends' Scene To Surprise Fans
By El Hunt
These 'Criminal Minds' Throwback Photos Show The Cast’s 17-Year Evolution
By Grace Wehniainen
The First Trailer For 'That '90s Show' Includes So Many Nods To The Original Series
By Jack Irvin, Alyssa Lapid and Grace Wehniainen
Get Even More From Bustle — Sign Up For The Newsletter