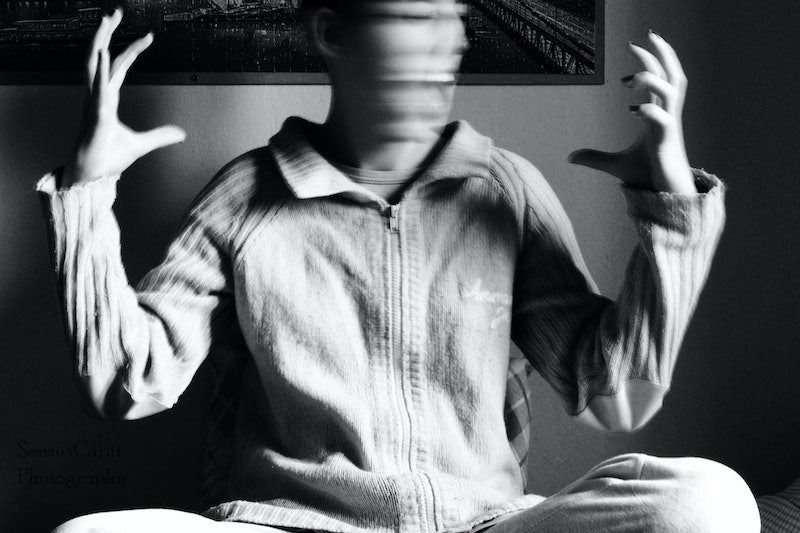 We all experience some level of anxiety on a daily basis. Whether it's over something as simple as which shoes to wear or over a larger life decision, a pall of worry can pop up at random. But, for people living with OCD, or obsessive-compulsive disorder, anxiety isn't a fleeting feeling. Sure, many of us have made off-the-cuff jokes about being "too OCD" or having OCD-like tendencies (I know I'm guilty of doing so on more than one occasion). For those who suffer from OCD or other anxiety disorders, though, there's nothing casual about it. Writer and director Torre Catalano recently opened up about his experience, sharing life through the lens of OCD in a sobering video riddled with obsessions, confessions, and compulsions. And by sharing what it's like to be in his blurry, static-filled mind for three minutes, Catalano is expanding an imperative narrative about the issues people with anxiety orders deal with daily — and the misconceptions surrounding them.

So, what is anxiety, exactly? According to the American Psychological Association, the definition of anxiety is "an emotion characterized by feelings of tension, worried thoughts and physical changes like increased blood pressure." For people living with OCD or other anxiety disorders, that emotion goes into hyperdrive, ultimately manifesting in obsessions. Persistent thoughts or impulses, obsessions are often inappropriate and nearly always intrusive fixations.

Breaking down Catalono's powerful video unveils many of these obsessions. "I made this video to give people a little glimpse into my own galaxy. It's weird and chaotic and beautiful, just like the actual galaxy that our funny little planets whip around in, dodge asteroids in, sustain and thrive in," he explains of his inspiration behind the project on The Mighty. "My hope is that by watching it, others who have OCD won't feel so alone, and they'll learn to love their own beautiful galaxy that rests just above their shoulders." Let's explore some of the hallmarks of living with OCD we learned from the reel.

Catalano barely has time to roll out of bed and let his feet hit the floor before doubts start pouring in. "Did I sleep enough? How much did I sleep? I hope I didn't do anything stupid yesterday." For those suffering from anxiety, these kinds of insecurities are recurring and can become very intrusive.

"I feel light-headed. I don't feel good. My pulse is fast. No, my pulse is too slow. My appetite isn't there. My appetite isn't great. Am I sick? My stomach really hurts. I hope it's not Ebola. I was on a plane recently, maybe it's Ebola." It's not unusual for hypochondriac tendencies to display in people with OCD; their fear of germs or contamination from germs leads to persistent depersonalization and hypervigilance.

"I need to smoke a cigarette. I have to smoke a cigarette. What am I doing?!" For Catalano, the unwanted impulse he deals with here is smoking a cigarette. Although his may be a relatively mild example, they can also include things such as shouting obscenities in inappropriate places or simply fearing you might reach out and push someone at any given moment.

When these obsessive thoughts cross the threshold from nagging to overwhelming, people with anxiety can't simply turn them off. The overstimulus can present both mentally and physically, with rapid heart rate, muscle spasms and extreme apprehension. Just think of it as a panic attack to the umpteenth power.

To calm obsessive thoughts like these, people with OCD may turn to rituals to soothe their anxious feelings, although typically no pleasure is derived from such rituals. The common perception here is that people with OCD are constantly organizing things, turning doorknobs, and the like. In reality, that could very well be the case — but it varies from person to person. In this video, we see Catolano counting his steps and, after succumbing to panic, repeating mantras and methodically breathing.

Because no two people are the same, the spectrum of obsessions experienced by anxiety sufferers is diverse. In addition to the ones Catalono opens our eyes to in his moving video, people with OCD frequently fight to stave off sexual imagery, violent obsessions, religious scrupulosity and even hoarding. It's Catalono's hope that the lens of his life will help others see at least one thing more clearly through theirs: You are not alone.