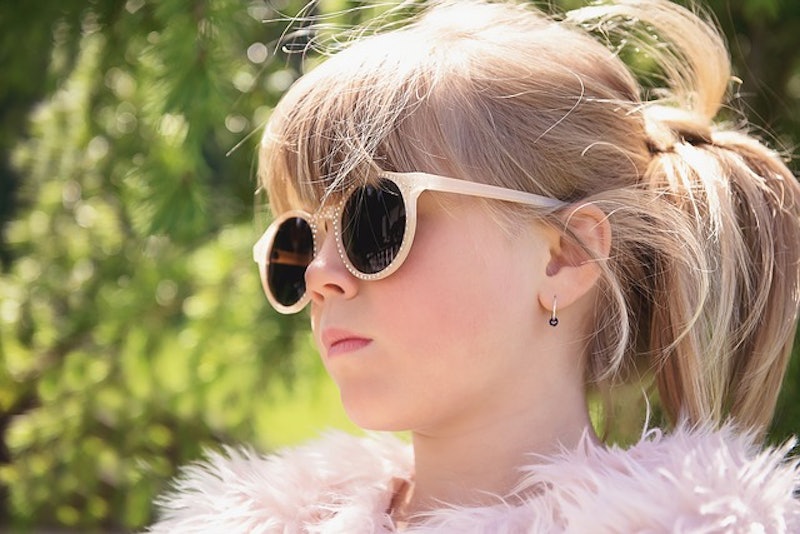 You know how when you're young, you know just enough about life to be like "OBVIOUSLY cheating is wrong and you should always dump the guy that does it" but not enough about life to anticipate being a relationship with someone you love and finding out they cheated on you? Being 12 is like that. It's all the confidence with none of the painful and confusing experiences. It's who you are and what you like before you learn to start hiding your less-cool preferences. Maybe instead of imagining the love advice you'd give to your younger self, we should steal dating tips from our childhood instead. It's you in your purest form, before you start worrying about people not approving.

That part starts at 13: other girls’ comments about your fashion choices, rumors about people liking certain girls for certain reasons, side-eye for babyish interests. You start choosing tight clothes over comfy ones, strategizing your interactions with your crush, and pretending to like things you don’t. Fake it until you make it is your entire teenage existence, and even that doesn’t always work. I remember being teased mercilessly by the mean girls in seventh grade for how flushed my cheeks got after gym class (I’m Irish, son, not fair). They told the boys in our grade it was because I put on extra makeup in the locker room and didn’t know how. What a try-hard, right?

I hated everything at 13: my face for making me look like I cared too much, the clothes my mom bought me at Sears for looking like they cost too little. I hated the 1980 model car my dad drove — the one I used to love because it felt like sailing in a boat on the highway — because it took up space and everyone looked at us, and all I wanted was to blend.

Twelve was better. Twelve was great. Twelve is who we should be a little forever, and especially while dating. Twelve had the right idea about things.

"Yes, those pigtails look EXACTLY like Baby Spice's, oh my god, you're on fire, you goddess." <==Thought process while spending 10 minutes in front of the mirror applying glitter products and only feeling excited and pretty, not hating anything on my face yet.

You basically confronted a crush about his or her intentions immediately (often in note form or through a friend asking as messenger), they thought that that was normal, and they responded right away. Whatever their answer was didn't really change the nature your interactions. So simple.

Don't care for my mom's Mariah Carey: Unplugged album? Don't want to play circus on my swing set? Want to play circus but think my idea of printing out show programs is stupid? You can GTFO of my (parents') house, we're done.

4. Zero To No Focus On Actual Sex

I was obsessed, single-mindedly, with the idea of kissing at age 12. My imagination literally didn't go any further than that, but it was enough. The possibility of it happening at any time, in any place, charged all the other dumb stuff me and my crushes did together — without a kiss ever having to take place. (Note: doing dumb stuff together is an important part of dating that we all skip now to get to the sex stuff and probably shouldn't).

I once watched a boy kill bugs in his backyard with the intense awe and wonder of Rose watching Jack sketch her in Titanic (and flicking the hair out of his eyes, oh my god that movie. Also an awesome thing that happened when I was 12).

Date outfits were basically what I had on, maybe with some fun accessories tacked on, like a necklace my grandma got me or a snap bracelet. I'd also add a splash of some nasty lemon-lime body spray, which made me feel extra dressed up and pretty. How my crush would take in all of this was never really the point. Swimsuits instead of underwear, overalls, etc, it was all date-worthy.

8. Stubborn Regard For Importance And Tastefulness Of Own Interests

I remember feeling only horror and confusion at a crush not liking what I liked, not any embarrassment or desire to make myself more in keeping with that person's tastes.

9. Dramatic Reverence For Own Feelings

Favorite summer pastime in '98: playing "Traces" over and over in my sister's boombox while writing in my diary about how my crush didn't pay any attention to me. It never occurred to me that he might not find the diary at a later date and come crawling for my hand in marriage, and that saved me a lot of pain in life. It also created deliciously dramatic and adult situations in the safety of my room without the threat of any real ego damage or emotional pain. Every woman should be so confident in her capacity to make men or women crawl.

Their confidence. Their plastic clothes. Their accessibility yet total lack of concern for male opinions — I really had my priorities in order when I was listening to "Stop" at age 10. I mean...

Boys taking swimming lessons with me, boys teaching the swimming lessons, boys who were the sons of my dad's friends, boys in my class, boys on my bus, boys across the street from my house, boys visiting from Florida... I found someone to like in every situation, and it made life exciting and fun.

12. And Getting Over People Super Quickly Because You Know There's Plenty More

Being a certain age used to mean something prestige wise in childhood, but was never an inhibitor to dating. I had crushes on Harrison Ford, Leonardo DiCaprio, Jonathan Taylor Thomas, and the kid across the street all in the same year and thought nothing of it. Were I an adolescent now, I'm sure Justin Bieber would need to explain a few things about appropriate dating ages to me too. Instead, my adult self freaks out if I find out a guy I like is a year younger. Hmm.

Whether or not you rode the bus or walked to school was some kind of dividing line when I was 12, but other than that I gave no f*cks about who the boys I went to school with were, where they were from, or what they did — as long as they loved me and didn't mind me playing the Backstreet Boys in the living room while we hung out on the floor.

It was so awesome feeling zero guilt about letting people down, because they were just as savage as girls when it came to circling the "N" on the Y/N note. Twelve was an equal opportunity year for the sexes.

When your heart hasn't been broken yet, you don't second guess its choices. You'll know how dumb that is later, but wow, what a way to live while it lasts.