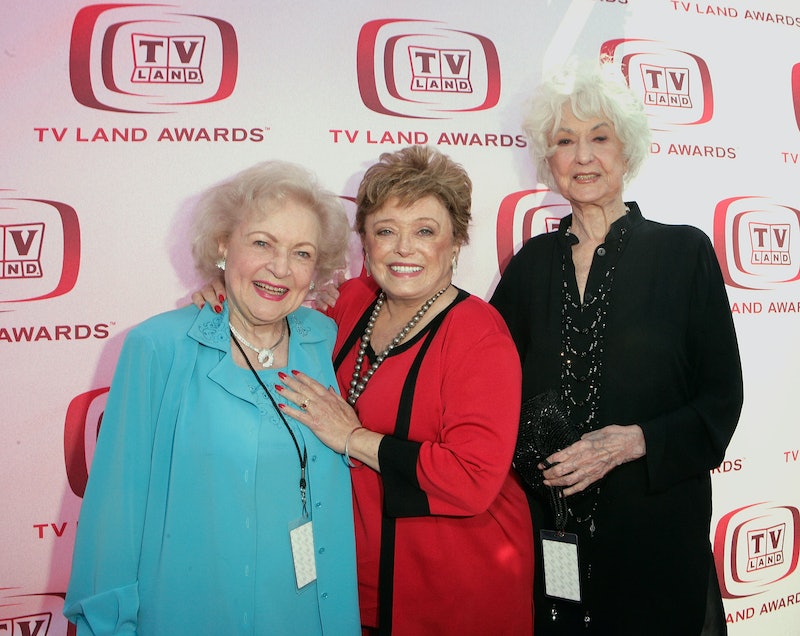 Growing up, I remember watching the '80s classic NBC sitcom The Golden Girls on Saturday nights, but never really understanding the jokes. I mean, there was a considerable age difference between 8-year-old me and senior citizen them. But one thing about the show always stuck with me: The Golden Girls had one of many foursomes of awesome women characters on TV. Sophia (Estelle Getty), Blanche (Rue McClanahan), Rose (Betty White), and Dorothy (Bea Arthur), of course, were members of the original foursome that made us laugh and feel all the feels about love and life in Miami.

It seems like most of the classic lady teams of TV have come in the form of four (#quadgoals, anyone?) and that sounds about right as a number. Six is a pretty big group (unless you're Friends) to share a home with, and two is just besties. As the saying goes, three's a crowd — odd numbers are so famous for leaving at least one person out. And if you think about it, four gives everyone someone to talk and everyone gets their own side of a square table. It's no wonder it works out perfectly in other shows like Pretty Little Liars, Girls, Desperate Housewives, Sex and the City, Living Single, and many more.

The original squad goals right here. Sophia, Blanche, Rose, and Dorothy were always there for each other — and there for us, every week sitting around that kitchen table in their Miami house.

As the theme song said, "in a 90s kind of world, I'm glad I got my girls." The 1993 comedy series followed Khadijah (Queen Latifah), Regine (Kim Fields), Synclaire (Kim Coles), and Maxine (Erika Alexander) living in dating in Brooklyn.

Susan (Teri Hatcher), Bree (Marcia Cross), Lynette (Felicity Huffman), and Gabrielle (Eva Longoria) took us through the secrets, lies, and mysteries of Wisteria Lane, that perfect suburban neighborhood (on the surface). Exec producer and creator Marc Cherry is no stranger to writing fierce women — he wrote for The Golden Girls.

The one question that bonds these four teen girls: Who is A? As we all know, they eventually do find out, but it's so fun to watch Aria (Lucy Hale), Spencer (Troian Bellisario), Hanna (Ashley Benson), and Emily (Shay Mitchell) try to figure out the person who's been manipulating their lives from afar.