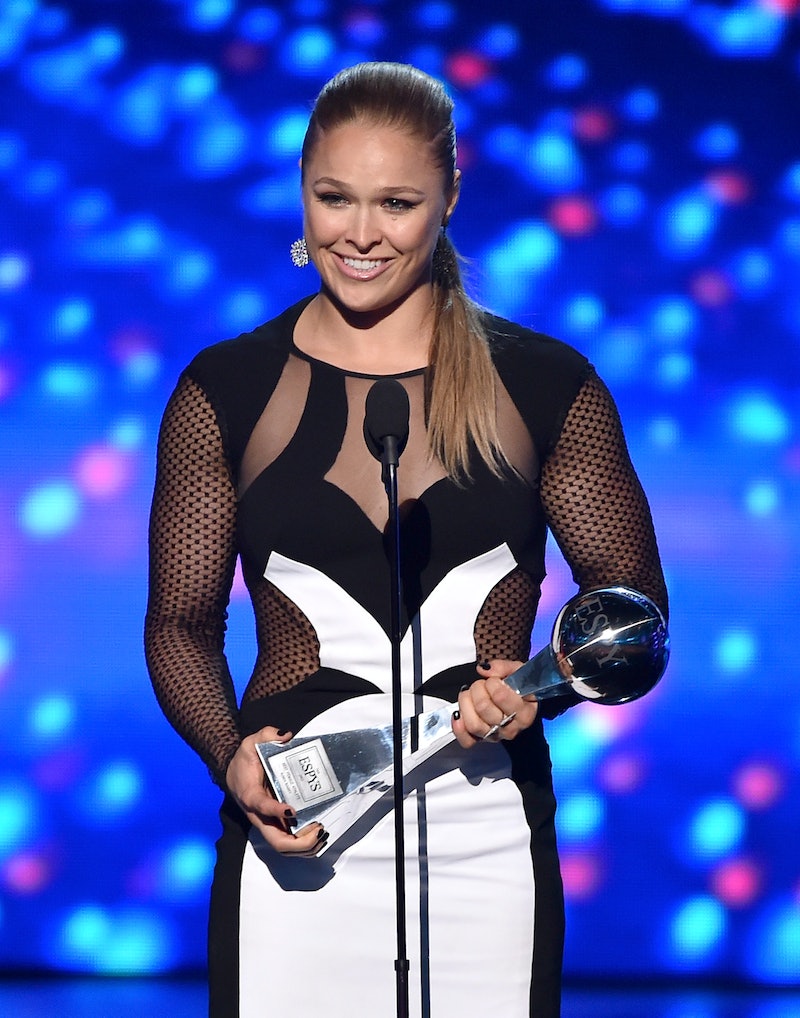 UFC fighter Ronda Rousey is a badass, plain and simple. Whether she's shutting down body-shamers or knocking out opponents in approximately 34 seconds, Rousey is not someone to mess with. She also has great acting chops, and has racked up film credits in everything from The Expendables 3 and Entourage. Those projects, however, appear to be just the beginning of Rousey's film career — because, according to Variety, the UFC fighter Rousey will star in a remake of Road House , the cult classic film that originally starred a male actor.

Yes: This remake is genderswapped. Praise!

For those not in the know, Road House is a 1989 cult classic featuring Patrick Swayze as a professional bouncer in a small Missouri town. Swayze suffers through knife fights, hails of gunfire, and battles with a local crime syndicate to protect his bar, The Double Deuce. It is easily one of the manliest films in cinematic history — the New York Post even reports that the NYPD uses Road House as a training video for its officers. The fact that such a perceived "manly movie" is being remade with a female lead is, to put it simply, amazing. #GIRLPOWER.

This got me wondering about which other classic films would be great with a genderswap reboot. So, listen up studio execs of America, I've got some lady actors who need to be in your next remake.

The original Arthur, released in 1981, starred Dudley Moore as an alcoholic New York socialite who must marry a fellow blue blood to keep his considerable wealth. Instead, Arthur falls in love with waitress Linda (played by Liza Minnelli) and the results are delightful. There was a 2011 remake starring Russell Brand, which is fine, but personally, I think another remake with J. Law as Arthur is definitely in order. As Arthuretta, Lawrence could expand on her skills as a comedienne, and bring her true, quirky self to screen. I would 100 percent pay good money to watch Lawrence wear a top hat and drink champagne in a bath tub — it's destiny, this must happen.

Few have mastered the role of the cranky funny guy quite like Bill Murray; that is, except for Anna Kendrick. Remember in the beginning of Pitch Perfect, when Kendrick was anti-social but still really likable? Yeah, that would make her perfect for a Groundhog Day reboot. Kendrick would slay as a spoiled and self-centered news reporter who becomes trapped in a loop of repeating the same day over and over again.

Lupita Nyong'o In Coming To America

In addition to being a style icon, Lupita Nyong'o is an amazingly talented actress. Her performance in 12 Years a Slave makes me feel all kinds of feels — she is so talented that I want to see more of her. I'd particularly like to see her spread her comedic wings, something I'm certain she'd be great at. The 1988 classic, Coming to America, features Eddie Murphy as a crowned prince who travels to America to gain his independence and find love. Whenever I watch this film, I am enthralled by the amazing costumes and Murphy's perfect comedic timing. So, think about it: A film featuring amazing clothes that requires mad acting skills? This role seems perfect for Nyong'o.

Julianne Hough is a super-talented triple threat that can dance, sing, and act. That makes her perfect for a Dirty Dancing remake with her in Patrick Swayze's original role of Johnny Castle. I think a film where a sexy female dance instructor hooks up with a sheltered rich kid would be stellar — where can I buy my ticket?

Reefer Madness was supposed to be an anti-drug propaganda film back in the mid-1930s. It ended up becoming a case study in bad acting and melodramatics instead, though. If you're not familiar, it tells the story of an unmarried couple living in sin, and selling drugs to young teens. Spoiler alert: It ends badly for all involved. With some minor tweaks to the plot and maybe less murder, a remake would be a guaranteed hit — and the super duo of Ilana Glazer and Abbi Jacobson writing and starring in a remake would be the greatest thing in stoner comedies since Cheech & Chong.

Amy Schumer In The Thin Man

The Thin Man was a series of detective films in the 1930s featuring William Powell as a boozy detective. There were talks of a remake starring Johnny Depp, but talks have stalled. So, I propose going in a completely different direction — how about a liquored-up Amy Schumer solving crimes? Yes, please.

Taylor Swift and her squad of talented beauties have already dominated red carpets, music videos, and the Internet — so, obvs, the next step is total box-office domination. That's right, I'm talking about an all-female version of Ocean's Eleven. Swift's squad is essentially the new rat pack, and Swift would be the perfect fit as the leader of a bank-robbing gang. It would be art imitating life! If the Bad Blood video is any indication, these woman can kick butt and would make awesome criminal masterminds.

So fingers crossed there are more female reboots in the future. This is a trend I can get behind.