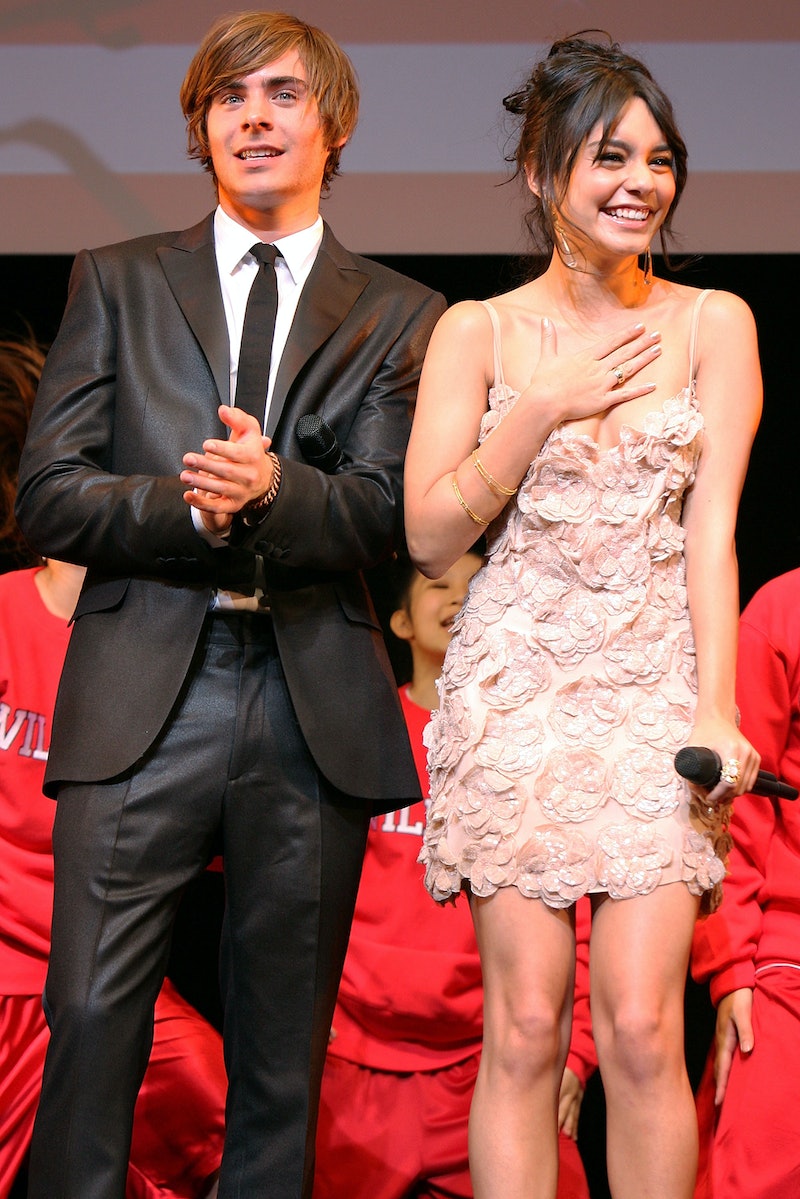 Disney Channel movie High School Musical premiered in 2006 and became an instant phenomenon. I couldn't go anywhere without hearing the songs or seeing it mentioned. Not long after, HSM spawned a sequel and I've decided to rewatch High School Musical as an adult, mostly because it contains one of my most favorite musical sequences. Okay, I actually saw the flick when I was in my early 20s, but one could argue that you're not a real adult until you're in your thirties. Perhaps now I can better appreciate the musical series that launched what I like to call "musical fever" in the 2010s.

High School Musical 2 follows Troy (Zac Efron), Gabriella (Vanessa Hudgens), and the East High School gang from the hollowed halls to a country club where they all get jobs for the summer, like it's the summer episodes of Saved by the Bell and Beverly Hills 90210. Naturally, the club holds a talent show and everyone wants to perform — especially mean girl Sharpay (Ashley Tisdale). When the sequel premiered on Disney Channel, it shattered records all over the place, amassing 17.2 million viewers and making it the most-watched cable movie and cable airing. "This was our Super Bowl," Disney Channel Worldwide entertainment president Gary Marsh told Variety at the time. "I think we have officially crossed the line from High School Musical the movie to High School Musical the mania.”

Indeed. Here's what I noticed when I rewatched High School Musical 2 as an adult. And as for my favorite musical number? Keep reading.

1. "What Time Is It" Accurately Sums Up How Exciting Summer Time Is

Oh man, I really miss having summer vacation. You know what I do during the summer as an adult? I work. All. The. Time.

2. Have Troy & Gabriella Kissed Yet?

The answer is no. They didn't kiss all throughout HSM and in the first few minutes of HSM2, everyone keeps interrupting their attempts at a liplock.

3. If Sharpay Is So Rich & Spoiled, Why Doesn't She Go To Private School?

Sharpay has the manager of the country club wrapped around her finger and really hammers her spoiledness home in the song "Fabulous." It got me thinking: If she's so rich and snobby, why would she slum it at East High? But then we meet her very calm and relaxed yogi mother in yoga class, who it seems wants her to be with the real people.

4. They Get Two Free Meals A Day At This Job!

The gang complains about doing bitch work in the jobs at the country club in "Work This Out," but what were they expecting? Being CEOs and managers at their first jobs? Oh, youth. But then Troy mentions that they get two free meals a day at this job and I'm sold. That's pretty damn awesome and someone needs to tell them that not all jobs are willing to feed you like that. It's like the jackpot.

5. How Does Troy Not See That Sharpay Is Into Him?

When Sharpay wants something, she really goes for it. She comes onto Troy super strong throughout the summer and even gets him to play golf with her dad and gets him to eat dinner with her and her parents. HOW DOES HE NOT SEE THIS? I mean, he's totally committed to Gabriella, yet doing boyfriendy stuff with another girl. Sure, Sharpay is super manipulative and traps him into this stuff and Gabriella is just too sweet to say anything.

6. But Everyone Else Can See It

"[Sharpay] is basically offering him a college education just to sing with her in the talent show," says Gabriella's astute friend Taylor. "You've got eyes, use them." Finally someone sees Sharpay's manipulations!

This song is "Humuhumunukunukuapua'a," which apparently only exists in the extended version of the movie. This was my first time seeing it and I can't even. Neither can Troy.

Sharpay's brother Ryan tries to convince the gang to participate in the talent show sans Troy, who seems to be fully under Sharpay's spell. How does he try to talk them into it? This big dance number at a baseball game, which promises to show us that baseball and dancing are the "same game." Wait, what? I love baseball, but it's a sport that involves a lot of standing around.

9. This Is Officially The Most Interesting Baseball Game Of All Time

So much for not dancing.

10. Finally, Gabriella Stands Up For Herself & Her Friends

It's taken long enough, but at least she does it with a helluva speech to Sharpay, that Troy overhears.

"What's the prize? Troy? The Stardazzle award? You have to go through all this just to get either one? No, thanks Sharpay. You're very good at a game that I don't want to play. So, I'm done here. But you better step away from the mirror long enough to check the damage that will always be right behind you."

Burn! Advantage, Montez. They kinda of sort of break up, as much as a couple who has never kissed can break up (yup, still hasn't happened!).

For so many reasons. It's Efron's crowning moment in HSM. He struts angrily onto a golf course alone and sings his heart out about losing his friends because of Sharpay's manipulations. He dances alone, too. It's epic and random and really showcases the actor's charisma. I mean, he's frolicking on a golf course for three minutes alone, golf clubs come out of nowhere, and Troy even sings to his reflection for a bit. It's no wonder he's the biggest star to emerge from this series.

12. It's So Great When Sharpay Finally Gets Out-Smarted

Kesli pulls a switcheroo and Troy sings a new song with Gabriella at the talent show. All Sharpay can do is pout and whine.

And there are fireworks and laterns and sprinklers. It's the Disney Channel, after all.