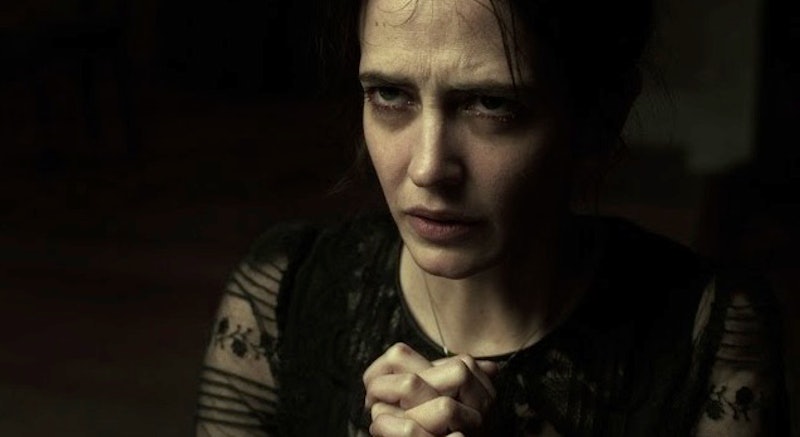 So, this first trailer for Showtime's Penny Dreadful may not give away much about what to expect from the mysterious series, but it does give us a good look at what aesthetic producers seem to be going for in the series: A perfect mix of creepy and intriguing, as if American Horror Story: Asylum was mixed with Hostel, or something. Seriously, Eva Green stars and, even though she's just praying a lot during this entire promo, girlfriend looks rough. Something must be going down. Otherwise, someone should probably give her a hairbrush or maybe a cool washcloth for her forehead.

That said — there's still not much info available about the series, so I can't exactly tell you what's going on for sure. I'm positive that we're all good at analyzing trailers, though, so I can make a few assumptions based on what we see here: Green is praying a lot in fear, but, as we see when the camera pans to the wall, she's kneeling before a cross that's inverted — often a symbol of Satanic worshippers. Is Green's character possessed? Trying to hold on to her humanity? Worshipping Satan? It's not clear — but she does appear to growl at the end, which isn't a good sign.

Penny Dreadful is set to premiere on Showtime in 2014. Until then, you can check out the teaser below.

More like this
This New Dating Show Is Netflix's Answer To 'Bachelor In Paradise'
By Grace Wehniainen
Everything To Know About A Potential 'Lockwood & Co.' Season 2
By Gretchen Smail
Shonda Rhimes Responded To The Surprise Exit Of A Day 1 'Grey's Anatomy' Figure
By Grace Wehniainen
This 'Gossip Girl' Wardrobe Error Has Gone Viral On TikTok
By Alyssa Lapid
Get Even More From Bustle — Sign Up For The Newsletter
From hair trends to relationship advice, our daily newsletter has everything you need to sound like a person who’s on TikTok, even if you aren’t.