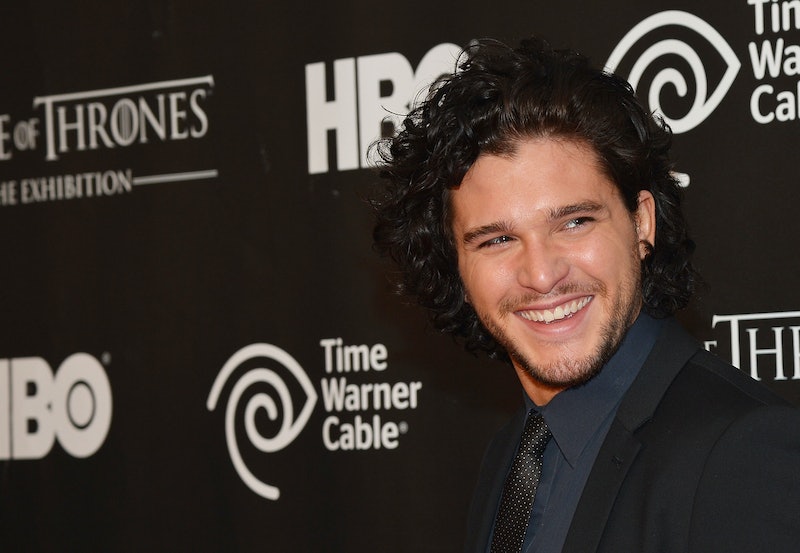 Kit Harington is one of my biggest actor crushes at the moment. Naturally, this also means that I have a crush on Jon Snow, the character that catapulted Harington onto red carpets and millions of ladies' #MCM posts all over the globe. The 28-year-old has become known for his trademark pout, especially as Jon Snow, who is one of the most troubled and complicated characters on Game of Thrones. The actor himself confessed that his portrayal of Snow has led many to question him about his solemn expression, and although he is just that good, there are plenty of times when Kit Harington has looked nothing like Jon Snow and just like, well, the Kit Harington.

I know, I know. Sometimes it is tough to separate your favorite characters from the actors who play them, especially when they still have the long hair and brooding, emotional looks of Jon Snow.... Why are these mysterious men always so attractive? I think that is a conversation for the next ladies wine night, but in the meantime, here are some photos I dug up to prove that Harington doesn't always look exactly like his long-haired and pouting character — even though that definitely wouldn't be a bad thing.

1. When He Smiled Next To Ygritte

Their forbidden love affair didn't allow for such foolishness.

2. When His Hair Was Gelled Back

You know Jon Snow wouldn't have time to primp like that.

3. When He Fraternized With A Fellow Soldier

This doesn't look like a Night's Watch uniform, Jon. Where is your coat?

4. When He Filmed A Period Piece

What kind of sorcery is this?

7. When He Basked In The Attention

Something tells me Jon Snow wouldn't be so comfortable in the spotlight. He's more into shadows and all that.

How can he look so good while both dirty and cleaned up?

More like this
Gwendoline Christie’s Partner Is Part Of Royal Family History
By Parry Ernsberger and Sophie McEvoy
Netflix Just Rebooted A Classic ‘90s High School Drama
By Maxine Harrison
Every Horror Movie Reference In The 'PLL: Original Sin' Premiere
By Alyssa Lapid
You Can Now FaceTime With 'Bridgerton's Regé-Jean Page
By El Hunt
Get Even More From Bustle — Sign Up For The Newsletter