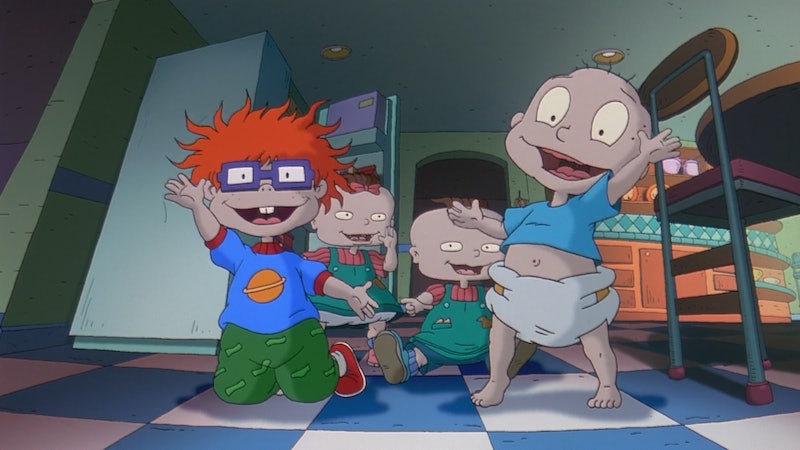 If you're a proud '90s kid, then there's nothing that excites you quite as much as watching the nostalgia-producing Nickelodeon shows of your youth. Now, an awesome new rumor suggests that you might not have to put an orange video tape into your VHS player in order to watch these old TV staples for much longer. Nickelodeon might launch an all-'90s network, which will basically be like a time machine for your television. So far, Nickelodeon hasn't confirmed what The Splat is, but there are two big rumors about what exactly it might be, and both will make your '90s-kid heart sing.

The first rumor about The Splat is the one the entire internet is freaking out about, and that's that it is a brand-new network filled with the best of '90s Nickelodeon. As evidence, look at The Splat's recently uploaded YouTube video, which features your favorite '90s cartoon characters and the tagline "The Splat Is Coming." While an entire channel dedicated to your favorite cartoons would be ridiculously sweet, The Splat may not be its own entity. A recent tweet suggests that The Splat would not be a new channel all its own, but would instead be a block of '90s shows that will exist within an already-established network. While that rumor would mean we wouldn't get '90s shows 24/7, it's still not a bad deal.

Whether The Splat is its own network or just a programming block, one thing is for sure: We're possibly getting a whole bunch of '90s shows heading our way. So which ones should you be most stoked about, if it's true? Here are the shows you're going to want to revisit if (but hopefully, when!) The Splat finally arrives:

1. The One That Defined Squad Goals: Rugrats

Just take a minute to digest the fact that the members of the Rugrats crew would now be in their mid 20s. Tommy probably has a Master's Degree and a live-in girlfriend.

2. The One That Made You Want To Hang With The Monsters Under Your Bed: Aaahh! Real Monsters

Before watching Aaahh! Real Monsters, I used to be freaked out by monsters that carried around their eyeballs. Now I see that they're just like us.

3. The One That Made You Want To Take Up Surfing: Rocket Power

Watching Rocket Power made me feel like all of my childhood activities were tragically lame (I still identify with Squid), but who didn't want to crush waves with Reggie, Otto, and the rest of the gang?

4. The One That Made You Try To Talk To Your Dog: The Wild Thornberrys

Anyone else think it was weird that, even though Eliza befriended animals, she still ate meat? Thank God this show was too fun to really overthink.

5. The One That Made You Want To Live In A Boarding House: Hey, Arnold!

Fun fact! The city in which Hey, Arnold! takes place is actually a compilation of several cities that creator Craig Bartlett loved — specifically Portland, Brooklyn, and Seattle. No matter where this city is, you totally wanted to kick it with football head's crew.

6. The One That Still Keeps You Up At Night: Are You Afraid Of The Dark?

There's no word yet on whether The Splat will feature live-action '90s shows, but fingers crossed that if they do, Are You Afraid Of The Dark? is at the very top of their programming list. The intro (those rocking boats! That swing set!) still gives me the chills.

7. The One That Introduced You To Sketch Comedy: All That

Unless you had really cool parents who would let you stay up super late to watch SNL, this Nickelodeon variety show was your first introduction to the sketch comedy format. Sure, some of the sketches are a tad outdated, but for the most part, they've stood the test of time pretty well. And of course, you can't talk about All That without mention of its equally-funny spinoff, The Amanda Show, which proved that some of the funniest comedians of the '90s were, well, kids.

Check out the teaser for The Splat. Fingers crossed that this '90s explosion happens really, really soon.

More like this
Emma Thompson, Lashana Lynch, & Stephen Graham Lead Netflix’s 'Matilda'
By Sophie McEvoy
Why You Loved 'One Tree Hill' So Much — And Still Do
By Sabienna Bowman and Radhika Menon
Jennifer Aniston Is Still Wearing That 'Friends' Dress She Stole From Monica's Closet
By Jake Viswanath
Everything To Know About 'My Big Fat Greek Wedding 3'
By Grace Wehniainen
Get Even More From Bustle — Sign Up For The Newsletter