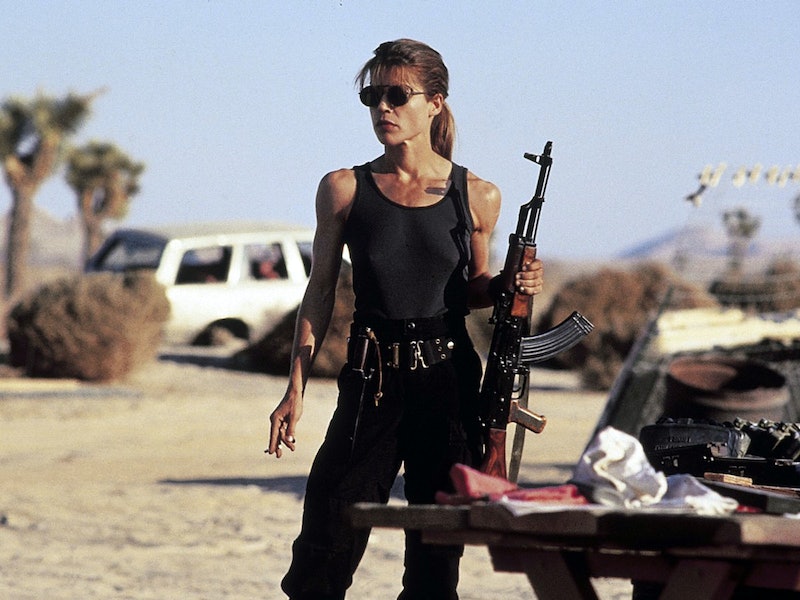 Sarah Connor has had two meaningful incarnations: Linda Hamilton's famously badass portrayal in the original Terminator movies and Lena Headey's good-but-not-as-good portrayal in TV's Terminator: The Sarah Connor Chronicles. So heading into the recently announced reboot of the beloved franchise, the question of who will play Sarah Connor, and how, is definitely present in fans' minds. Hamilton made Sarah Connor the most compelling character in the first two Terminator movies — she transformed the character from simpering and helpless in the first movie to buff and bad-ass in T2. Plus, those arms — oh my god, the arms. As Game of Thrones has taught us, Headey has a truly spectacular bitchface, but, in The Sarah Connor Chronicles, she didn't hit hardcore rebel quite as, well, hard as Hamilton.

So who will play this feminist icon in the new movie? It's a difficult question — and an unenviable responsibility — for Paramount, the studio behind the reboot. Because the film will need to tread carefully — Sarah, with her legions of fans, can't be taken lightly. Since the last Terminator franchise was made, our expectations of female heroines and their portrayals have really changed. In the '80s, a feminist Sarah Connor was the departure from the norm, but these days, having a fully realized female lead is something feminists and film-goers alike look for, occasionally to no avail. Sarah Connor is the perfect feminist character: She is strong, is willing to make sacrifices for the general good, and, more importantly, she isn't perfect. She is doing her duty to the world while losing her mind in the process, and that is what makes her part of Terminator so poetic. She has to continue striving, teaching her son the skills he'll need to survive, even though the very act of doing so pushes her over the edge.

So who could step into such big shoes? Sarah's fight is the never-ending superhero's quest to to save a world that disdains her for doing so, and therefore her character requires a lot more depth and skill than the average heroine in an ass-kicking, high budget action franchise. I'd love to see someone like Rooney Mara or Diane Kruger play her — an actress that can deftly switch between fragile and unbreakable, confused and assured. That's the kind of Sarah Connor we want and need.