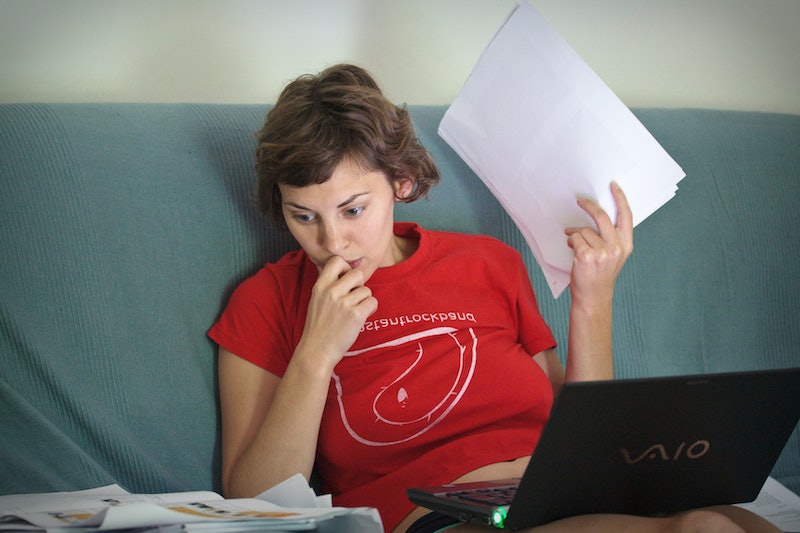 Today in why aren't you leaning in news: Apparently, 57 percent of women have never asked for a raise, compared with 46 percent of men who never have, according to a Glamour poll. I'll admit that I wasn't too surprised when I read that read that; I've asked for more money plenty of times, but I notice that sometimes bosses seem to get offended by me broaching the subject of a raise, like I'm out to hurt them. (Would they have that kind of reaction to a man asking for a raise? I've always wondered.) But none of that changes the fact that we can and should be asking for raises when we think the work we're doing deserves more compensation, so here are a few ways to go about doing it.

Undoubtedly, it's a tough thing to do, especially if you want to maintain a good relationship with your boss (who could potentially take your dissatisfaction with your income as a sign that you're looking for a new job) and coworkers (who may make very different salaries than you for doing the same exact job). But in the Glamour article about the poll, they said that when women ask for raises, they get them 75 percent of the time — so, really, what do you have to lose?

Here are some ideas for asking for a raise in a way that bolsters your chances come your next performance review:

Thanks to the Internet and sources like Glassdoor.com, you can find out the average salary of people with your job title. But you can even get more specific than that — try to broach salary discussions with other people who do your job within your company. If you're worried about coming off as rude, slide your way into the question by mentioning your own income, and how salary transparency benefits employees. Bring your research into the meeting — your bosses might be impressed by how well-prepared you are.

Petyr Littlefinger from Game of Thrones would be an excellent career advisor if he was, like, 50 percent less creepy to Sansa. In the books and TV shows he rises from a meagre background to become the Lord Protector of the Vale. He does this through a single, guiding philosophy — as he tells another character on the show, "Chaos is a ladder." When you have a new boss, or your company is considering a merge or buyout, don't panic — a time of change happens to be a great time to prove your worth and ask for a promotion and raise. Also, don't stand near a moon door.

Be honest with yourself — are you doing well enough that you deserve a raise? If the answer is no, that doesn't mean you shouldn't ask for a raise anyway (you might be undervaluing your work — many women do). And everyone has moments — personal emergencies, sicknesses, mental health episodes — where they're not as good of an employee as they could be. But try to make sure you're coming off a winning streak at work in the month or so before you plan to ask for a raise. And be sure to bring those successes into the performance review to remind your boss what you deserve.

It sounds corny, but try rehearsing what you're going to say when you ask for a raise with a friend. It will make you more confident when you're actually in front of your boss — and it will keep you from low-balling yourself. I heard somewhere once that when freelancers set their rate, it should be a number that's high enough to embarrass them. It's the same with asking for a raise — practice riding through the awkwardness of the moment.

This is something most career books won't tell you, but people in unions across the board make more and have better benefits than people who aren't in unions. Collective bargaining means that everyone who works at a company can negotiate their wages together, which gives employees a stronger hand. Many unions negotiate predictable wage increase schedules, meaning that you might get a raise every year. And unions aren't just for blue collar employees, either — pretty much every industry has a union. Here's how to organize your workplace.

6. Don't Be Afraid to Switch Jobs

If your efforts don't pay off, you can always try looking for another job. "Before my current job I learned that the best way to have a real jump in salary is to leave your company," said one woman quoted in the Glamour article. "You won't get a $10,000 to $15,000 raise all at once staying in one place, but it's easy to make that kind of jump if you switch companies."

More like this
How To Fight For Reproductive Rights, Based On How Much Time You Have
By Courtney Young
5 Ways To Stand In Solidarity With Women In America From The UK
By Sophie McEvoy
The 3 Dating Apps Queer Women & Nonbinary Folks Actually Like
By Emma Carey
Why You're Seeing Green Bandanas At Abortion Rights Protests
By Lexi Inks
Get Even More From Bustle — Sign Up For The Newsletter