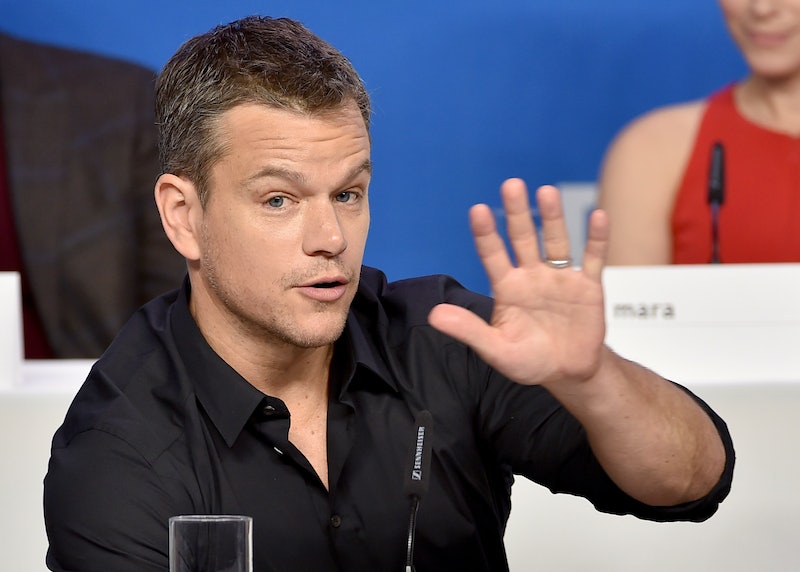 It's no secret that Hollywood has a lot of work to do when it comes to representation in movies and TV. It's a challenge to find a major blockbuster with someone other than a white male as the lead, and, sadly, the same is often true behind the camera. As a recent article in The Washington Post stated, the entertainment industry has a "race problem," and it's evidenced by the fact that though minorities make up 36 percent of the U.S. population, they only represent 10 percent of lead actors and 12 percent of directors, the Post reports. Ben Affleck and Matt Damon's show Project Greenlight, in which the celebrities seek a first-time director for a film project, could have helped combat this problem. Instead, a tone-deaf comment made by Damon about diversity is just proving how big of an issue this really is. Bustle reached out for comment from Damon's reps, but hasn't heard back at this time.

The actor's comment was made on the premiere of the recently-revived Project Greenlight, a series whose purpose this season is to seek a director for the comedy Not Another Pretty Woman . The premise of the film doesn't do itself any favors: seemingly borrowing from the Julia Roberts' romantic comedy Pretty Woman, the film is about a man who gets left at the altar and ends up marrying a black sex worker who happens to have a white pimp. Dear White People producer Effie Brown apparently noticed the potential gender and racial issues involved in the story line, and suggested to Damon that they seek a more diverse directing team who might treat the story more sensitively.

Damon, however, didn't really get it, and descends into some mansplaining I hate to say came from someone I enjoy so much as an actor and filmmaker. Writing off Brown's point about a diverse team behind the camera, Damon insisted that the only diversity this film needs is in its cast:

Here's the thing about Damon's comment: it's just so wrong. While we should applaud movies for including a cast that isn't completely whitewashed, that's not the only thing necessary to making a film that is representative and respectful of people of color. We also need these characters to be treated as more than just a symbol of their race: we need them to feel like human beings on-screen with a purpose. The black prostitute featured in Project Greenlight's film could very well be a complex character — but the character could just as easily be envisioned as a racist trope, which a non-white director might potentially work to avoid.

There is a silver lining in this exchange, and that's that people aren't putting up with Damon's write-off of Brown's important point. Several sites, including Mic, Jezebel, and Flavorwire, picked up on the cringe-worthy exchange (of which Brown was, as one commenter on Jezebel wrote, was a "goddess of restraint") and schooled Damon on why his comment was problematic. Twitter, too, has taken issue, with posts like the comment above and more recognizing the quote's issues.

Here's hoping that the rest of the season of this show includes some important conversations about race, diversity, and the lack of it in Hollywood films. Acknowledging Hollywood's race problem isn't going to fix the system, but it's certainly an important step in making progress. A reality show about filmmaking needs to confront these issues, even if producer Damon doesn't yet understand why.

More like this
Women Around The World Are Cutting Their Hair In Solidarity With Mahsa Amini
By Darshita Goyal
Black Women's Equal Pay Day Highlights An Upsetting Problem
By Brandi Neal
Lin-Manuel Miranda & Tituss Burgess React To 'Little Mermaid' Casting Backlash
By Radhika Menon
After 'Hocus Pocus 2', The Sanderson Sisters Are Coming to Broadway
By Radhika Menon
Get Even More From Bustle — Sign Up For The Newsletter