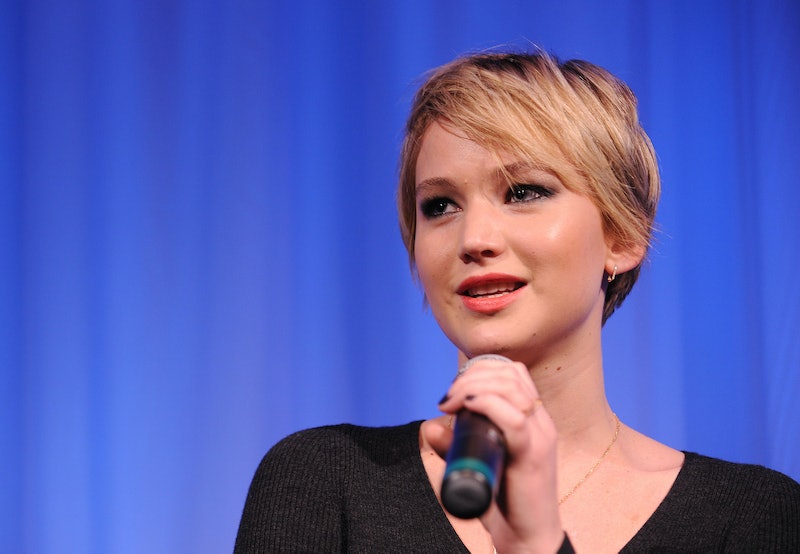 Jennifer Lawrence is still just like us and yes, we still want to be her best friend. Just because she's been named People 's most intriguing person of the year and will be featured on Barbara Walters' 10 Most Fascinating People of 2013 alongside His Royal Highness Prince George doesn't mean she's immune to all embarrassment and what-ifs. The American Hustle actress stopped by Conan where she talked about an embarrassing moment she had at a hotel recently where the maid service discovered a large stash of sex toys under her bed. Lawrence also clued Conan in on what career she'd choose if she wasn't an Academy Award-winning actress — a hotel maid.

It's no secret that we already love Lawrence and we wish we could hang out with her every day, but every time she opens her mouth lately she just reinforces our obsession with her. She literally can't even deter us from making it our life goal to be her BFF by sharing that she had hidden a box with a "huge amount of multi-colored butt plugs" under her bed in a hotel recently. And that's saying something. She claims that the box in question was found by the maid service at the hotel she was staying in and the maid arranged them in "a beautiful display" on her bedside table. Relax, the box of butt plugs (I think Lawrence said "butt plugs" at least 10 times during the interview) was given to her as a gag gift but still, anyone who can laugh this off and then tell the story on television can hang with us.

In another hilarious confession, which makes total sense to us now that the holidays are rolling around because we're all guilty of it, Lawrence shared that she loves "going through everybody's stuff" and is essentially a self-proclaimed snoop. We could seriously use her to find out what presents we're getting for the holidays this year, right guys? Lawrence's confession came as a result of Conan asking the actress what her "second choice" job would be, you know, if being an award-winning actress doesn't work out in the long-run, to which she aptly replied "a hotel maid". (She used to want to be a doctor, but changed that dream because it was unrealistic. We've all been there, girl.) Surprise! To think, Jennifer Lawrence could have been making your hotel bed if she didn't get cast in Winter's Bone. The actress said that it would be her dream to have new people to snoop on in hotel rooms every day and that the job incorporates her favorite parts of cleaning — beds and bathrooms. Now we know that we can talk to her about how much we hate doing dishes if we ever succeed in becoming best friends!

Here's the clip of her interview with Conan:

More like this
J.Lo Calls Ben Affleck “The Most Consistent & Selfless” Dad On Father's Day
By Jake Viswanath
Daryl McCormack On His Unusual First Audition With Emma Thompson
By Olivia-Anne Cleary
Lindsay Lohan Is “The Luckiest Woman In The World” After Her Marriage
By Grace Wehniainen
Chrishell Stause & G Flip Have “No Rules Or Regulations” In Their Relationship
By Brad Witter
Get Even More From Bustle — Sign Up For The Newsletter