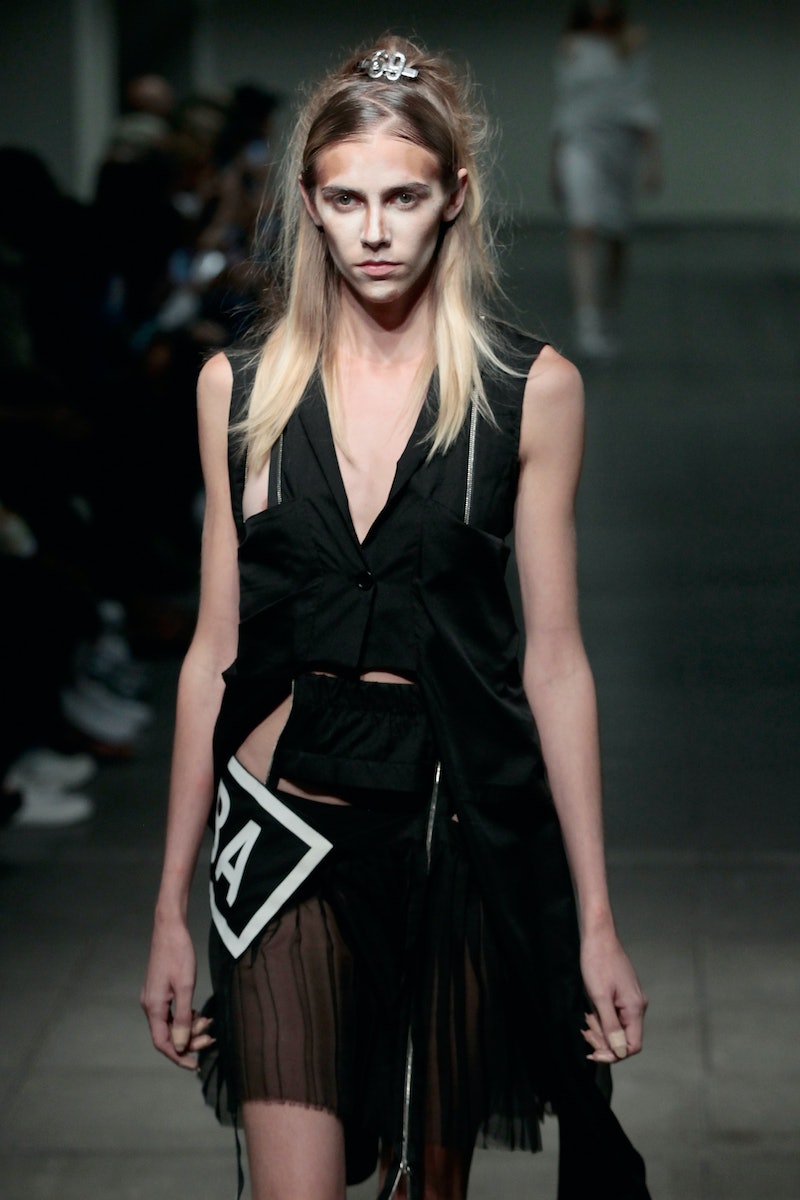 Although New York Fashion Week may be an innately female-dominated institution, the event nevertheless consistently draws criticism for practices that one might label less than uplifting. However, in recent years the CFDA and its partners have cracked down on behavior deemed detrimental to women, and key designers have adopted a laser-like focus on female advancement paired with gender equality. Unhealthy models and presentations based upon movement-restricting garb have thankfully gone the way of last season's styles (for the most part), giving way to a new generation of sartorial trends that seek to restore the authority of the fairer sex.

Of course, the glass ceiling cannot be broken without a considerable amount of dramatic flair, and what better occasion than Fashion Week to take a tricked-out axe to antiquated gender conventions? The best manner of drawing attention to an objective is by causing a kerfuffle, and Fashion Week's designers specialize in such theatrics. From daring anatomical designs and runway demonstrations to runways populated with the country's most accomplished business leaders, the sartorial festival is a pivotal playground for feminism. If you're under the false impression that Fashion Week's foundation is frilly attire and twee cosmetics, read on for seven moments that made a major feminist impact.

What do you get when you pair one forward-thinking Forbes 30 Under 30 designer with a handful of the United States' foremost female financiers, journalists, and philanthropists? The answer is Carrie Hammer's runway, known for its "Role Models, Not Runway Models" motto which encourages career-driven women to seek talented industry leaders as their sartorial guides. Hammer's Spring 2016 runway united role models including disability advocate and comedian Maysoon Zayid, Olympic figure skater Meryl Davis, and United Nations Communications and Advocacy Advisor La Neice Collins.

Months of eagerly awaiting the death of the Kardashian-wrought contouring trend finally paid off at Hood By Air's Spring 2016 presentation, where unblended contouring cosmetics presented an eery commentary on modern culture's obsession with airbrushed, Instagram-filtered, uniform perfection. Light and dark slashes of color drew attention to the rampant pursuit of the media-approved image of beauty, and reminded audience members that the greatest aesthetic charm is in fact found in imperfections, not artifice.

Rick Owens created a minor sartorial seismic event when he secured the services of a strong and spirited step team in 2013. The measure invigorated critics and audience members alike, and two years later, was echoed in Open Ceremony's Spring 2016 presentation. The Justin Peck-directed dance served as an important prompt that fashion is meant to promote movement and creativity, not restrict it.

4. Emilia Pfohl and Nan Li's "My Pussy, My Choice" Collection

It is blessedly impossible to finish Fashion Week without encountering at least one outright political or cultural message, and designers Namilia's "My Pussy, My Choice" presentation took the proverbial cake for doing so this season. Emblazoned with phallic imagery both metaphorical and literal, the collection by designers Emilia Pfohl and Nan Li sought to imbue females with authority through direct confrontation of the opposite sex. "In the context of art history the phallus has been always the untouchable symbol of male fertility, power and ultimate masculinity," the designers explained in an interview with Slate . "For us it's a radical move of rebellion to use this universal symbol of male domination in a ridiculing and ironic way throughout the collection, to play down its value of power and masculinity in an ironic, youthful and provocative way... It's like playing the penis game. The more often and louder you say it, the more harmless it becomes."

Nina Simone's forthcoming biopic and Netflix documentary have sparked renewed interest in the chanteuse's life and times, revealing crucial details about the woman who made great strides not only in her industry, but also for civil and gender rights. Derek Lam's utilitarian, no-nonsense collection was reportedly influenced by Simone's style, and indeed her insistence on equality.

A woman who has spent a half century in the grueling business of fashion is a cause for jubilation in itself. The fact that said designer is feminist powerhouse and adored eccentric Betsey Johnson is yet another.

Tia Cibani happened to be pregnant as she prepared to debut her namesake Spring 2016 Collection, and the designer's maternal sensibilities combined with strong, Bahian samba flavor lent the collection a decidedly feminist feel. After all, what could be more feminist than combining one's love of family with their love of fashion, and celebrating women around the world who do the same?