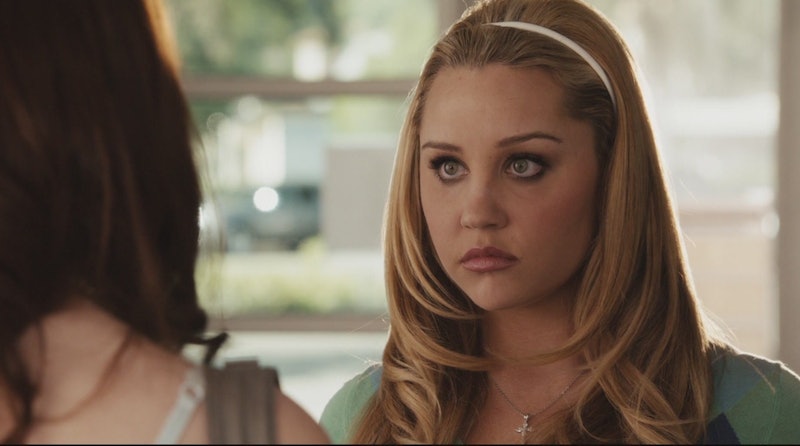 Amanda Bynes was, for a time, a hilarious star in her own right. She made some solid teen comedies including the ridiculously funny She's The Man and What A Girl Wants. And then she was able to turn the tables by playing an overly stuffy, extremely Christian student Marianne in Easy A, the high school version of The Scarlet Letter starring America's Sweetheart Emma Stone. While Stone was deservingly front and center in this pitch-perfect high school comedy, Bynes stole scenes left and right with Marianne — and added the right amount of insanity that the film needed. In fact, after ranking Amanda Bynes' lines in Easy A , it became obvious that without Marianne, there's not only no story progression, there's no film at all.

Marianne begins the rumor that started Olive's journey into fake trollop, she then helps to flame the fire of hate against Olive as things go from innocently naughty to total sexual chaos. Sure most of the winning lines come from Emma Stone in the film, even in the exchanges with Marianne. But without Amanda Bynes, the role of Marianne could have come off ridiculously obnoxious and totally shrill. She makes it work, thanks to her smartly-written lines in the film and her winning charm that still seeps through the performance. Seriously, who else can talk about hating "the whores and homosexuals" like Bynes as Marianne and not get punched?

It's the least clever of her one-liners and it's no wonder, Olive gets the last laugh: "Looks like someone's practicing the mundane activity she'll be saddled with the rest of her pathetic life."

11. "I just hope for your sake you had the good sense to use protection."

Once again, a relatively boring one-liner, and once again Olive gets the better quote: "Why? Your parents didn’t." But it's Marianne's attitude that helps sell this one.

The one-liners are getting better!

Olive's line helps sell the whole exchange here: "Oh, I have sixteen years worth of anecdotal proof that He does." Marianne and Olive have the best tension/chemistry.

8. "I tried to witness to her, but this girl is defiant of any type of help."

Just remember, this "witnessing" that Marianne did was judging Olive and telling her she's also being judged by God. It's not really the best way to get through to someone you're trying to save, and that makes it funny.

Olive Penderghast: "Just as long as you won't be there"

The one-liner where Marianne actually gets the last laugh! It's the best.

6. "I'm not the one you have to answer to for your depraved behavior. There's a higher power that will judge you for your indecency."

Once again Olive gets the last laugh, by asking "Tom Cruise?" in response. But Marianne's one-liners do work from time to time and this is one of them, especially thanks to her hand motion while saying the line.

So inspirational, so so cheesy. So fantastic.

4. "How can we exhibit school pride when we're conveyed to others as Satan worshipers?"

Only Marianne could get an entire school to change mascots from the threatening Blue Devils to the damn Woodchucks.

3. "Olive Pendergast. We need to pray for her. But we also need to get her the Hell out of here."

This is classic Marianne and it's excellent.

Olive Penderghast: Don't you think it's a little strange that your boyfriend is 22 years old and still in high school?

Marianne: Not that it's any of your busniess, trollop, but he is here by choice.

Olive Penderghast: So it's his choice that he's a fourth year senior who can't pass any test he takes?

Marianne: No, silly. (points up) His. His, with a capital H. If God wanted him to graduate, then God would have given him the right answers.

Olive Penderghast: [laughs] I'm sorry, but you gotta be shittin' me, woman. Ok so why was he blubbering like a baby? Is he struggling with his sexuality?

Marianne: "No you insensitive rhymes with witch! His parents are going through a divorce!"

It's pure and utter perfection.

1. "Jesus tells us to love everyone, even the whores and the homosexuals. But it's so hard! It's so hard because they keep doing it, over and over again."

Marianne is not only the most God-loving Christian, she's also the most everyone-hating person, and that's what makes her so ridiculously fun to watch. The movie nailed the character. Bynes nailed the role.