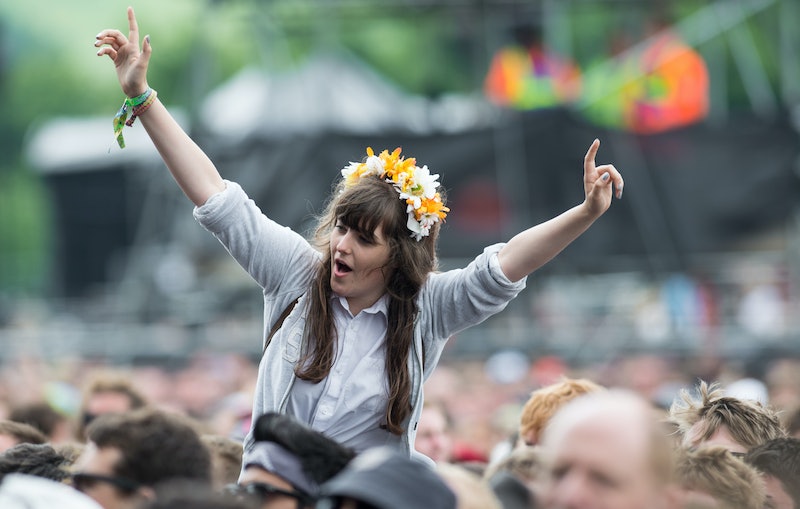 I’m going to take you on a journey back in time. Back before iPhones. Back before Instagram. Back when I made my mom drive me to Miami so I could see The Academy Is… play mainstage at Warped Tour. That’s right, we’re headed to 2006.

I remember wearing leopard print ballet flats, skinny jeans, a lace blouse, and a bow in my hair because it was 2006 and that was a thing we were all doing, and thinking I looked amazing. But about a half-hour into the festival I was sweating bullets, thanks to wearing jeans in Miami in the middle of June. Two hours in, I said “Screw it” to the bow, and threw my hair into a top bun. Around four in the afternoon, it began to pour. My leopard print ballet flats were covered in mud, as were my dreams of looking stylish at a musical festival. I had learned my lesson: Looking trendy should not be your first priority when attending a music festival.

The money-saving website Offer of the Day recently reported that the average festival-attendee drops over $300 to attend a festival—and that’s not including the price of ticket. Some of that money can be attributed to festival essential like wet wipes, toilet paper, and sunscreen, but flower crowns and gladiator sandals are also to blame. In a time where every outfit you wear will be photographed and filtered, it makes sense that many people would rather go for fashion over function. Just because something makes logical sense, however, doesn’t mean you should do it.

Contrary to what “Festival Fashion” Pinterest boards might imply, the point of going to a musical festival is to listen to music. The last thing you want is to be complaining how uncomfortable your wedge sandals are, or how your maxi dress keeps sticking to your legs, or how your RayBans got stomped on in the stampede to the main stage. Even if an outfit gets you featured on a style blog, it’s not worth being miserable.

Listen, I get it. I really do. As someone who is deeply interested in style, I often find myself susceptible to the seduction of festival fashion. I attended Governor’s Ball this year, and even though I knew it was going to be a rainy, muddy mess, I was still tempted to wear a printed romper and leather sandals. Instead, I wound up going with clunky rainboots, a ratty t-shirt, denim shorts, and a yellow poncho. Instagram-worthy? Not even a little bit. But looking good was really the last thing on my mind when stomping in the mud to The xx.