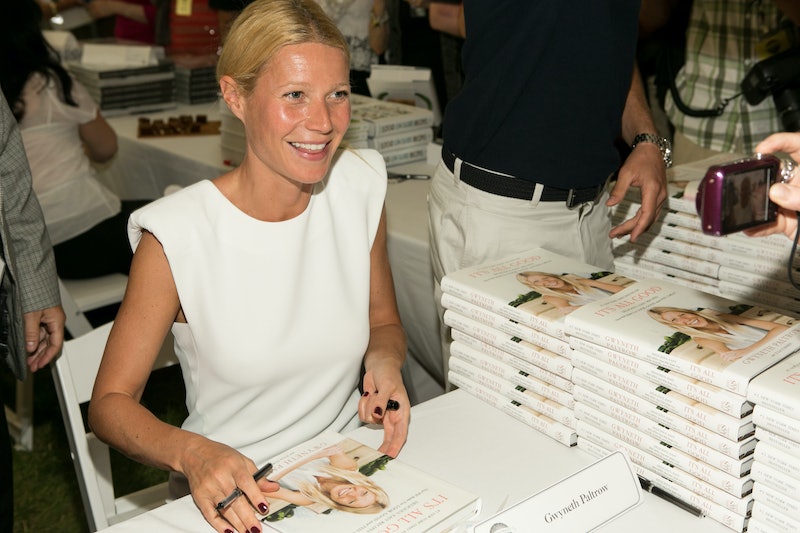 When it comes to lifestyle gurus, it's funny that those who spring most quickly to mind are neither particularly likable, nor do they even remotely understand the average woman's lifestyle. Yet the fierce and frighteningly WASP-y lifestyle showdown between Gwyneth Paltrow and Martha Stewart recently upped it's intensity to a whopping icy-glares-over-dry-martinis level, which, in case you aren't a WASP, is pretty much the highest level of feuding possible. When TMZ asked Stewart whether she or Gwynnie was a better life coach, Stewart apparently responded, "Oh, for heaven's sake, you have to live to be a coach!" Ouch. Sort of?

The thing is, that in a throw down between the Goop empire and the Martha Stewart Living empire, most of us are likely to give 'em both a solid no-thanks. If given the choice between subscribing to Martha's lifestyle advice versus Gwyneth's slightly more updated but equally uptight lifestyle tips, I'd probably end up scrounging through the dumpsters behind Pier 1, crying over a slightly broken sofa as I dragged it all the way home while mumbling something I cannot possibly repeat here about kale.

Newsflash ladies, my "lifestyle" is obsessively checking Twitter while eating an unconscionable amount of ice pops, if you can't give me tips about that, then no, I don't need your advice on which three-thousand-dollar sofa would best match the newest line of throw pillows available on (insert Martha Steward Living or Goop in here, literally doesn't matter which).

So here's a reminder, in convenient list form, of why no one wins in a lifestyle competition between Gwyneth Paltrow and Martha Stewart. Seriously, no one.

1) Martha Stewart's Twitter reads like how I imagine my mom's would if I gave her a tutorial in social media etiquette. Which is to say properly managed, but totally boring. (Sorry mom.)

2) Gwyneth might be better at Twitter, but her bio simply reads "Goop.com." Jesus woman, we know you're soulless but to describe yourself as a homewares website? Shit is cold, ice cold.

3) Martha Stewart went to prison for insider trading, and then bitched and moaned about how terrible it was despite not being in gen. pop (and we DO know what that means, thanks Orange Is The New Black).

4) Buuuuut Gwyneth Paltrow is torturing her London neighbors with ongoing, invasive construction on her London home. And that is terribly rude, which in Britain, is pretty much a jailworthy offense.

5) Martha thinks we actually want to eat this for lunch:

7) Gwynnie also advises cutting out dairy, red meat, eggs, sugar, wheat and processed food from your diet. Woman, if I can't have ice cream, give me death. End of story.

8) At least Martha lets us eat bacon (even if it is on truly disgusting looking salads).

More like this
15 Piping Hot Behind-The-Scenes Secrets From 'Great British Bake Off'
By Emily Dixon and Darshita Goyal
Why TikTok Is Obsessed With Caesar Salads Right Now
By Alexis Morillo
TikTok's Butter Board Might Be The New Cheese Plate
By Emma Carey
For Alexia Del Valle, Her Latinx Roots Influence All Of Her Content
By Alexis Morillo
Get Even More From Bustle — Sign Up For The Newsletter