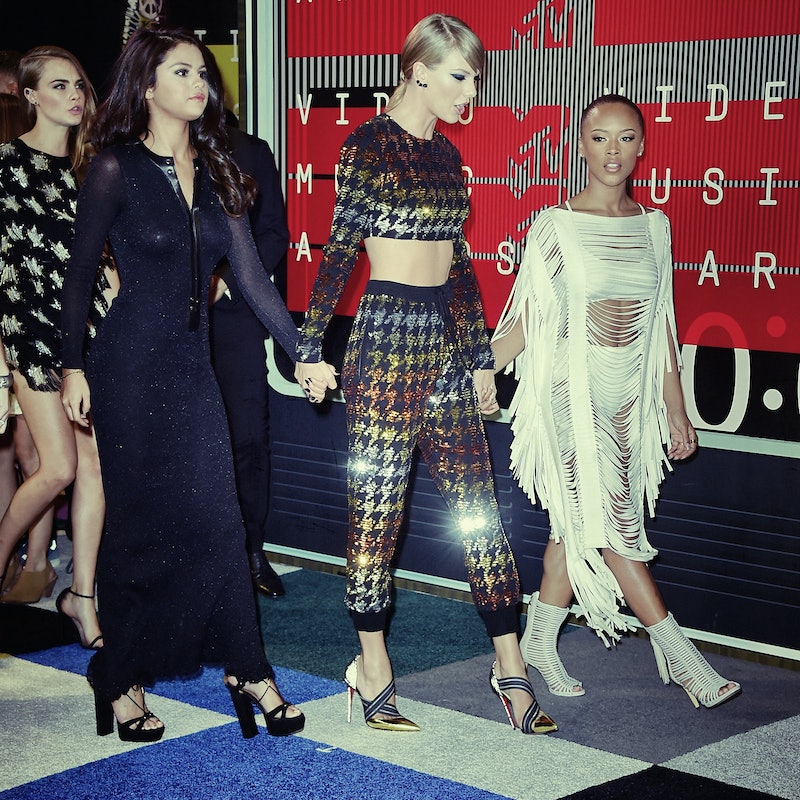 I know it feels like five seconds since the MTV VMAs, but get ready: It's time for another music awards show! The MTV European Music Award nominations were released Tuesday, and, thankfully, it looks like the "Best Female" category is a diverse collection of all the women who are totally killing it in the music industry today.

This year, powerful female voices were found everywhere on the extensive nominations list. While Taylor Swift is leading the pack with nine nominations over a variety of categories for multiple projects (like "Bad Blood" off of her 2014 release 1989) other women are accompanying her across different categories: Nicki Minaj, Lorde, Ariana Grande, and newcomer Tori Kelly, to name a few, are all filling up spots in categories like "Best Song" and "Best Pop.

No category shows more promise this year than the "Best Female" division, though: It houses none other than Ellie Goulding, Miley Cyrus, Minaj, Rihanna, and, of course, Swift. Wow, talk about a power combination. This category is bursting with not only talent, but diversity: All five women have different genres, styles, and cultures, and each have their own distinct audiences who are passionate about their music. The competition is sure to be fierce, but whoever wins rightfully deserves it.

Of course, all five of these fierce females have had significant milestones in their careers and are only headed for more success. Here's a rundown of what the five nominees have been up to lately and why they each deserve the win.

This 28 year-old British beauty continues to prove that the British invasion is nowhere near over. Her beautiful single "Love Me Like You Do" blew up after making it's mark on the Fifty Shades of Grey soundtrack, and has only grown more popular since then. Not only is she nominated for "Best Female," but she is also nominated for "Best Song" for "Love Me Like You Do." Additionally, the blonde beauty announced her new music with a trippy GIF on Instagram and Twitter the other day, so it is clear that she has even more hits on the way.

Cyrus has made numerous headlines this summer. Whether it was for her hosting the 2015 MTV Video Music Awards, her on-stage drama with Nicki Minaj, or the surprise release of her newest album Miley Cyrus And Her Dead Petz, the "We Can't Stop" singer has remained in the press. This pop singer is no stranger to the limelight, though, of course — and with her strong fan base and her strong vocals, it's no wonder she is included in the "Best Female" category as well.

Minaj's name hasn't left the charts since her 2014 release of her album The Pinkprint. From "Anaconda" to her girl-power duet "Feeling Myself" with none other than Beyoncé, all of Minaj's singles from The Pinkprint placed on the Billboard charts. She is also always one to voice her opinion and stand up for herself and her music, and clearly, it's paying off: Based off of the success of her latest album and tour, it comes as no surprise that she is one of the five powerful women in the "Best Female" category.

Rihanna stays winning: And this year, any song she has partaken in has been a success: For instance, "Four.Five.Seconds" with Kanye West and Paul McCartney slayed the charts, and "American Oxygen" was a hit for introducing a different side of Rihanna musically. Nothing compares to the success of "B*tch Better Have My Money," though, which held numerous chart positions and peaked at number 15 on the Billboard charts. There is no doubt that Rihanna is a strong competitor in the "Best Female" category.

This year has been a big one for T. Swift. From her numerous VMA wins to breaking Vevo records, and even winning her first Emmy, the "Blank Space" singer has racked up awards across the board. Additionally, her incredibly popular 1989 album and tour have helped her reach new heights: Her music videos have made waves, and "Bad Blood" broke the Vevo 24-hour record at the time, as well as helped her win several VMAs. Swift is a shoe-in for the "Best Female" category, right up there with her talented competitors.

Who run the world? By the looks of things, it should be a no brainer. These five women are leading the pack and representing women in the music industry with their massive success. The only way for them to go is up, and the MTV EMA nominations show that.