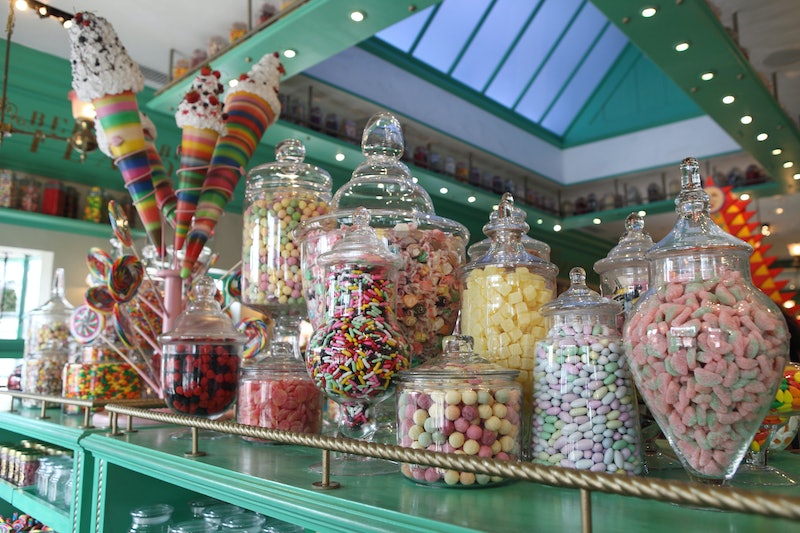 Reading the Harry Potter series on an empty stomach isn’t advisable, because amidst the pages of good-versus-evil battles, there’s also a lot of description of food. Even the most basic dishes sounded like magical delights to me when I first read the series. Shepherd’s pie? Yorkshire pudding? Mint humbugs? I didn’t even know what all of that was, but it sounded amazing. Of course, mixed in with descriptions of Mrs. Weasley’s fantastic cooking, and the plentiful feasts at Hogwarts (seriously, they had a feast for, like, every occasion), were descriptions of magical food as well. I always wished that Honeydukes were real, and, of course, Florean Fortescue’s ice cream parlour, so I could try everything on the menu.

Now, you can sort of try it all, thanks to the invention of Harry Potter World. After all, there are plenty of restaurants and food stands at the theme park that serve everything from the aforementioned shepherd’s pie to pumpkin juice. And, there are also plenty of recipes online for making your own Harry Potter-inspired food (and drinks… hellooo, Butterbeer). Of course, not ALL of the enchanting food sounded appetizing and worthy of the good ol' DIY try... from the nastiest to the best, here's a ranking of some of the most iconic dishes from the world of Harry Potter.

This is by far the grossest concoction at Hogwarts. Since the ghosts can't actually eat anything, they serve rotted food at Deathday parties, so the stench is so great that they can almost taste it. Personally, I don't think haggis is particularly appetizing to begin with (sheep's liver mixed with oatmeal and stuffed inside an animal stomach? I'm not picky, but, no thank you...), and adding maggots to the mix doesn't help.

Hagrid isn't known as the best cook, but his rock cakes are one of the worst dishes. Instead of cakes, they're really mostly rock.

These dangerous confections from Honeydukes can burn a hole in your tongue, which would probably decrease the ability to enjoy the sweet.

Another candy I wouldn't want to purchase from Honeydukes: cockroach clusters. With so many other sugary options, I would definitely steer clear from anything where the main ingredient is bugs.

So, as a native of the Southern U.S., I've never actually known what "stoat" is. When reading Harry Potter, I pictured these sandwiches as roast beef with sauce or something like that. Upon looking up what "stoat" actually is, I have to say that these sandwiches are 1,000 percent less appetizing: apparently a "stoat" is a type of weasel. No wonder Harry, Ron, and Hermione didn't want any when Hagrid offered.

You might get chocolate or peppermint or toffee flavored, and everything's great. But you also might bite into belly button lint, dirt, dog food, envelope glue, phlegm, or vomit.

While Mrs. Dursley's elaborate pudding sounds really good (sugared violets sound like the prettiest and most delicious things ever), we don't actually know, because Dobby destroyed it. Also, just a note on pudding: as a young resident of the U.S.A., I wondered why the characters of Harry Potter ate so much custard, before finally realizing that "pudding" = "dessert." Makes a lot more sense.

On one hand, Mrs. Weasley is an excellent cook. On the other, corned beef. Obviously Ron isn't a fan, but the sandwiches can't be ALL bad, because Mrs. Weasley handmade them with love. <3

Pros: chocolate. Cons: frogs. In the movies, it freaked me out when these candies hopped away. Do they squirm when you try to eat them? If you swallow them whole, do they hop around in your stomach? Just how long does this enchantment last? It's enough to make one wary of purchasing too many, though they do come with awesome collectible cards, and most students seem to really enjoy them. So perhaps the texture isn't too off-putting.

Remember when there wasn't enough ice cream on Dudley's Knickerbocker glory, and he pitched a fit, so Harry got to eat the rest? That's the taste of happiness right there. This may not be a magical dish, but Harry was happy when he ate it, so it probably tasted great.

When I visited London for the first time, I couldn't wait to try pasties, mostly because of how many times they're mentioned in Harry Potter. Though these turnovers are usually filled with meat, pumpkin filling sounds great, especially if paired with a cold glass of butterbeer, while the Quidditch World Cup is on... perfection.

In Harry Potter and the Goblet of Fire, Hermione introduces Ron to this French seafood dish. He compares the name to a sneeze, but if the stew is good enough for Fleur Delacour, it's got to taste lovely.

Harry shares these with Ron on his very first trip on the Hogwarts Express. I picture them as those hot lava cakes with creamy centers. Yum.

This classic dish is often served at Hogwarts feasts, so obviously it's got to be good. In fact, all of the Hogwarts feasts sound amazing... though the fact that it's cooked with house-elf labor disqualifies it from rising higher on the list (though Dumbledore does eventually pay Dobby, so if it's made by Dobby, yay).

Not only is Lupin's chocolate delicious, but it helps Harry recover after the dementors pass by the Hogwarts Express in Harry Potter and the Prisoner of Azkaban. Win/win.

From fainting fancies to fever fudge, the skiving snackboxes allow you to 1) eat candy, and 2) get excused from whatever you want to get out of. Plus Fred and George invented them, so you're also supporting a small business with your purchase. Win/win/WIN.

They may be Muggle sweets, but Dumbledore loves them, and I trust his judgment.

This is Harry's favorite, aka the Chosen Dessert.

Hagrid might be a terrible cook, but he can bake a cake, and this one not only tastes good — it represents the first time Harry finds out he's a wizard. Instead of getting a gift of a single tissue from the Dursleys, Harry receives the gift of a home and friends and a magical new life. The cake is the icing on top of this wonderful discovery.

More like this
Rupert Grint Just Shared A *Major* Update About Ron Weasley’s Future
By El Hunt
Netflix Shut Down 'Bridgerton' S3 Rumours About A “Very Dark” Storyline
By Bustle
Jessica Simpson On The Time She Was Pursued By A Backstreet Boy & An *NSYNC Member
By The Editors
Prince Harry Incorrectly Recites Christina Aguilera’s “Genie In A Bottle” Lyrics
By Jake Viswanath
Get Even More From Bustle — Sign Up For The Newsletter
From hair trends to relationship advice, our daily newsletter has everything you need to sound like a person who’s on TikTok, even if you aren’t.