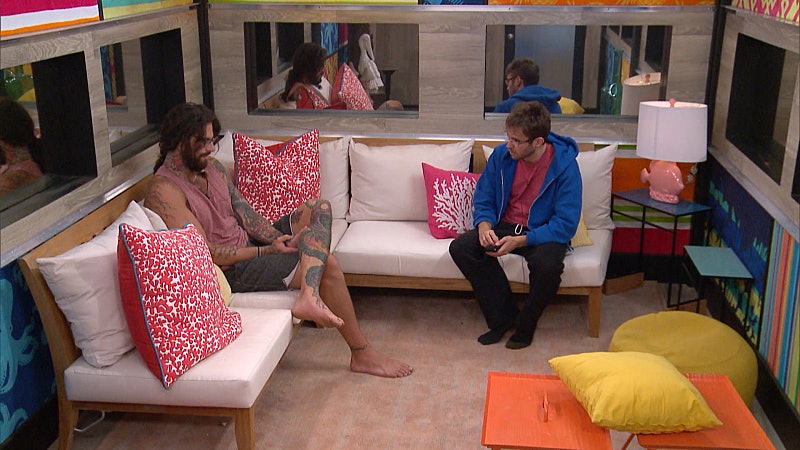 The time has come, my friends, for us to celebrate. We are not celebrating the crowning of the Big Brother winner being announced — we still have another week for that — but instead we're celebrating the eviction of Austin, Judas, my worst nightmare (all one of the same). Yes, you read that right, Austin has been evicted from the Big Brother 17 house, and this is officially the best day of my entire life, above any future things that will happen to me like marriages, children, birthday parties, Mindy Kaling tweeting me back... Judas is gone forever, leaving only four houseguests remaining, and now it's just a matter of the best of the worst being crowned the Big Brother winner.

It was kind of impossible to know who was going home, between Austin and Steve this week. The feeds went down before the eviction, so we didn't really know what conversations were being had behind-the-scenes, a first for the season since most of the time of evictions were easy to predict. As we saw on Tuesday's show, it was a torn house, causing Vanessa to break the tie (Vanessa, I believe this is called "taking a blood bath"). Her reasoning that she came to play a game and that Austin was a bigger threat. Austin, like the gentleman he is, put Vanessa on blast as he left the house, saying she'd never win the game.

Austin's eviction feels like it should've happened years ago, even though I didn't even know who he was years ago — that's just what feels natural in my mind. Austin has been playing this game with an interesting technique, since I never really knew who his loyalty stood with other than Liz (and therefore Julia as well). He would constantly throw competitions, which I never understood because people can see that he's throwing competitions and is incredibly physically fit. But most importantly, Austin used his "alter ego" Judas, who only came out when wearing a top hat as if this were Dr. Jekyll and Mr. Hyde. You're not Dr. Jekyll OR Mr. Hyde, Austin; take off the top hat, untie your ponytail beard, and move on with your life without death-gripping Liz to sleep, without magician's accessories, and without your GIRLFRIEND AT HOME.

Steve was just as much of a threat as Austin was. While Austin has played a loyal game to Liz, he didn't exactly execute any huge game moves that stand out — Steve broke up the twins. They both won similar amounts of competitions, as well, so either way, a threat to win the game was going to leave. Luckily, it was the threat who absolutely deserved it.