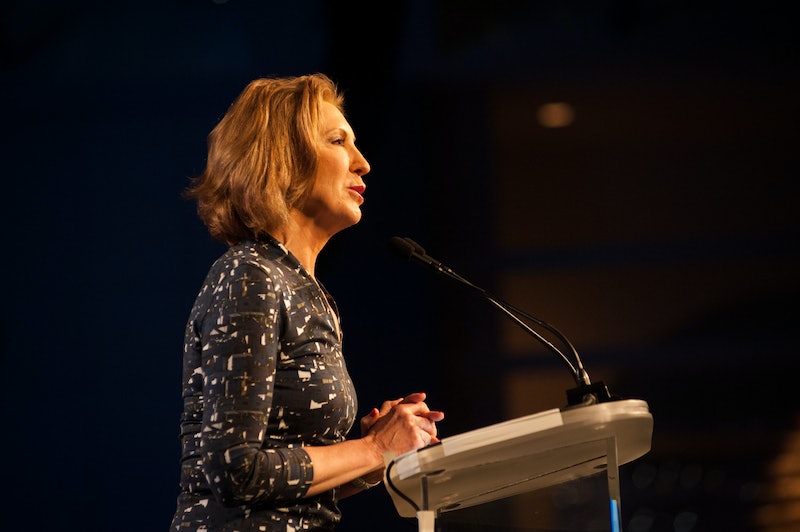 Carly Fiorina is known as the only woman from the GOP running for president, the stand-out performer in the first Republican forum, recent nemesis to Donald Trump, and former CEO of Hewlett-Packard. Fiorina has touted her business experience as one of the main reasons she's a great candidate for president, but what do we really know about her history as a business person? Certainly being the CEO of a Fortune 100 company is impressive, and when Fiorina assumed her role as CEO for HP, she was the first woman to ever lead a Fortune 100 company. She's constantly referred to and announced as the "former CEO of HP," so what's with the "former?" Why did Fiorina leave HP?

Well, it turns out Fiorina didn't so much "leave" HP, but rather she was asked to leave. She was fired. Early in 2005, HP's board (including Fiorina) held an emergency meeting in Chicago, where the board expressed frustrations over Fiorina's performance, Bloomberg reported in 2005. The day after the meeting was held, the board asked Fiorina to step down from her position as CEO. At the time of her ouster, Fiorina had been CEO for nearly six years. While nobody likes to get fired, Fiorina has been very open about the circumstances surrounding her departure from HP.

In a July interview with Meet The Press, Fiorina spoke frankly about her interpretation of what happened with HP. Fiorina told Chuck Todd, "It is a leader's job to challenge the status quo, and when you do, you make enemies." She also noted that at the time of her firing, the U.S. was experiencing "the worst technology recession in 25 years."

The fact still remains that under Fiorina's leadership, shareholder wealth at HP dropped 52 percent, and 30,000 employees were fired, according to Fortune. HP's stock rose 10 percent the day HP announced that Fiorina had been fired and Fiorina has not served as a CEO since being fired from HP.

Somewhat ironically, at the time Fiorina was fired in 2005, a former HP executive told Bloomberg that Fiorina was "good with marketing; she's a good speaker for the company. But this is a company that doesn't need a statesman. It needs a hands-on operations person." Fiorina may have heard that comment and taken it to heart, as she is now vying for the top political position in the U.S.