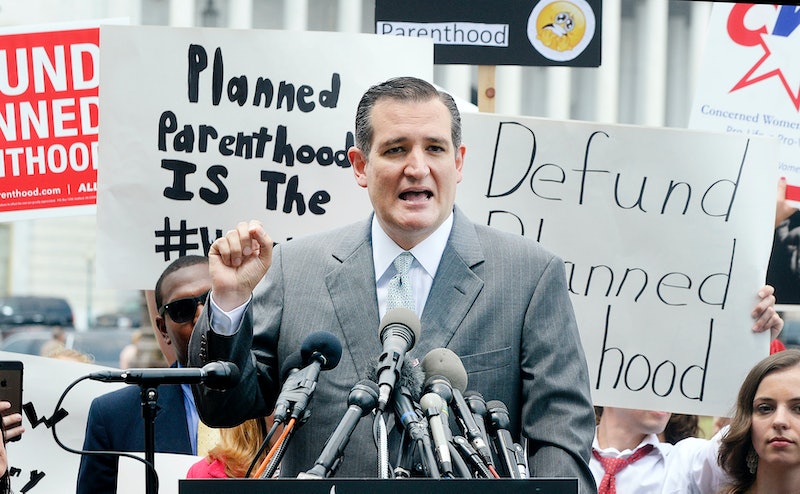 If there is one thing we can absolutely expect from the second Republican primary debate, it's that there will be some totally false facts about Planned Parenthood thrown around during the night. If the second debate on Wednesday goes anything like the first debate in August, then the subject of abortion and Planned Parenthood is likely to take center stage.

In the first debate, the candidates really outdid themselves in terms of absolutely jaw-dropping comments about abortion services. While Jeb Bush and Scott Walker were competing over who was more successful at defunding the women's health organization in their home states, Marco Rubio was busy denying the idea that he would ever have supported an exception that would allow abortion in cases of rape and incest.

But the star of the abortion debate had to be former Arkansas Gov. Mike Huckabee, who wanted to overrule the Supreme Court's Roe v. Wade decision and invoke the Constitution as a way of combating abortion. "I think the next president ought to invoke the Fifth and 14th Amendments to the Constitution," Huckabee said while announcing his desire to use due process to protect unborn babies. Huckabee also referred to how science has proven a "DNA schedule" which proves life begins at conception — something that does not exist.

In the second debate, the candidates are likely to be even more brazen that before. So if Planned Parenthood comes up, keep an ear out for some of these false facts that might get tossed around.

There will likely be many references to the undercover videos released earlier this summer that aim to implicate Planned Parenthood in a national conspiracy to sell baby parts — but this isn't true. Yes, the organization donates fetal tissue to medical centers, and yes, there are some costs involved. But these cover basic acquisition or transport fees. The organization makes nothing off of it. Even the GOP has had to admit there are no laws being broken.

The candidates will probably mention that Planned Parenthood isn't needed, and may even name drop some other women's health clinics that would do a much better job. But the candidates would be wrong. According to the organization, 2.7 million men and women use the clinic's services yearly, and an estimated one in five women have visited a Planned Parenthood at least once.

I can almost promise that there will be assurances by the candidates that they will not allow the American people to pay for abortions. But here's the kicker: they don't. Thanks to the Hyde Amendment, which was passed in 1976, federal funding — specifically Medicaid funding — cannot go toward an abortion procedure.

Although the right to life may be a Republican staple, the general American populace doesn't necessarily agree. Earlier this summer — after the videos were released — a poll showed that 52 percent of Americans were not in favor of defunding the organization. The same poll showed that 28 percent of Republicans have a positive view of Planned Parenthood.

Why do we need to defund Planned Parenthood? Because all they do are abortions! At least, according to some outspoken Planned Parenthood critics. But the reality is that abortion procedures only make up 3 percent of the organization's service. The other 97 percent are dominated by STD screenings, contraceptives, and other non-abortion related services.

Though the candidates may not say it directly, they will likely talk about defunding Planned Parenthood as some perfect solution that will magically make all abortions everywhere go away. But that's just not true. As evidenced above, federal funding doesn't go toward abortion services, so the lack of government funds wouldn't affect that side of the services. But in reality, cutting funding will probably raise the abortion rate — suddenly the 2.7 million individuals who use the clinics will have difficulties getting access to contraceptives and sexual health education. Which can lead to more unplanned pregnancies, which means more call for abortions.

Remember: forewarned is forearmed, so as you watch the second GOP debate on Wednesday, be prepared to hear some of these "facts" thrown around. Don't feed into the culture of misinformation surrounding the abortion debate.