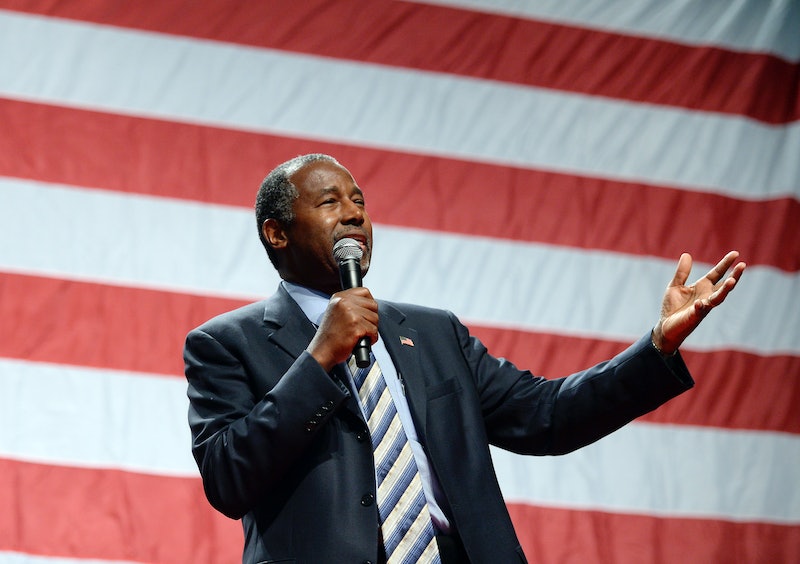 The next GOP debate is already upon us. In addition to providing a glimpse into Republican candidates' various platforms, it's also a great way for presidential hopefuls to set themselves apart from the pack. Texas Gov. Rick Perry might have dropped out of the race, but there are still 15 right-wing candidates vying for voters' attention. Now more than ever, it's important for candidates to distinguish themselves if they want to continue to pursue a White House bid. Ben Carson's GOP debate closing statements were particularly evocative, showing that the former neurosurgeon is a force to be reckoned with.

Carson is one of a majority of candidates who have appeared on both prime-time debates so far. He's been successful and prominent enough to have his numbers continue to steadily climb. Thus, it appears that Carson has come a long way since his early debate days. In a recent CNN/ORC survey from Sept. 9 through 13, it looked as if the prominent surgeon had risen from a dismal six percent to 23 percent popularity. The surgeon was asked about how he his leadership as president would be similar to Reagan's during the GOP debate and had this to say when the time came for him to share some final thoughts:

When I look at what is going on with the United States of America, I see a lot of things that are not logical. I see us allowing people to divide us, when in fact our strength is in our unity. I see people exercising the most irresponsible fiscal habits that anyone could possibly do. And hiding it from the American people, so that the majority of people have no idea what our financial situation is... Reagan was a master at understanding that a pinnacle nation has to be a nation that leads. If we learn to lead in the Middle East right now, a coalition will form behind us, but never they do it if we just sit there and talk about it. Real leadership is what I would hopefully bring to America.

In the previous Republican debate, Carson used his lack of political experience to his advantage. When initially asked whether his limited political career would hinder him, the retired medical professional told viewers that his record outside of politics would more than make up for a lack of formal political training. Carson said:

Carson's entire platform relies on disrupting the status quo rather than being a career politician eyeing the next potential political promotion. His remarks speak to the inherent desire in the Republican party to change the way the country is currently being run. This is why some of the most talked-about candidates are relative newcomers to the scene. In addition to Carson, GOP frontrunner Donald Trump has never formally run for office before. Former HP CEO Carly Fiorina ran for a California senate seat in 2010 but was defeated by incumbent Barbara Boxer.

It's Carson's hope that his fresh perspective will change the country for the better and his final remarks during Wednesday night's debate certainly reflects that.