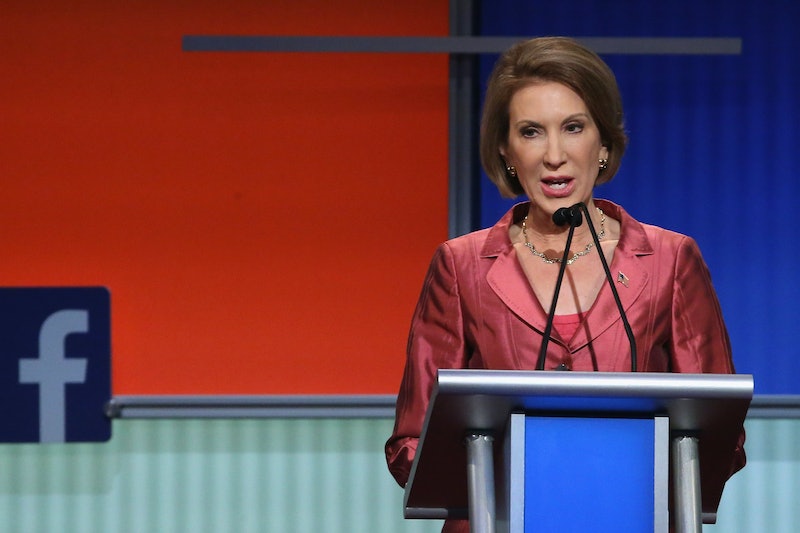 After an impressive debut on the Republican primary debate main stage, Carly Fiorina's closing statements were a perfect conclusion to an exciting evening. Going into the second GOP debate, Fiorina had a lot of expectations placed on her. Having performed in the "happy hour" debate the first time around, she was the only newcomer to the main event. Many were interested to see how she would change the dynamic, and if she would be as successful tonight as she was in the first debate.

And Fiorina didn't disappoint. As the clear winner of the happy hour debate in August, Fiorina more than earned her place on the stage tonight. She managed to stand out, even among 10 other candidates — and not just because she was the only female on the stage.

As with her previous closing statement, Fiorina's final remark is likely to make headlines — but for different reasons. As some may recall, one of Fiorina's staffers (or maybe even the candidate herself) left her final remarks in a hotel printer before the Fox News debate. But there were no gaffes tonight. Instead, the candidate closed out her performance with an amazing and inspiring speech about Lady Liberty and Lady Justice — one that drew many parallels between the American icons and possibly Fiorina herself.

I think what this nation can be an must be can be symbolized by Lady Liberty and Lady Justice. Lady Liberty stands tall and strong. She is clear eyed and resolute. She doesn't shield her eyes from the realities of the world, but she faces outward into the world nevertheless as we always must, and she holds her torch high. Because she knows she is a beacon of hope in a very troubled world. And Lady Justice. Lady Justice holds a sword by her side because she is a fighter, a warrior for the values and the principles that have made this nation great. She holds a scale in her other hand, and with that scale she says all of us are equal in the eyes of God. And so all of us must be equal in the eyes of the government, powerful and powerless alike. And she wears a blindfold. And with that blindfold she is saying to us us that it must be true, it can be true, that in this country in this century it doesn't matter how you are, it doesn't matter who you are, it doesn't matter what you look like, it doesn't matter how you start, and it doesn't matter your circumstances. Here in this nation, every American's life must be filled with the possibilities that come from their God given gifts, one nation, under God, indivisible, with liberty and justice for all.

Fiorina's performance in the first debate managed to propel her up from the bottom of the polls, and it may just happen again. Her closing statement was inspiring and memorable, and distanced Fiorina from the men on the stage. While some candidates faltered during the second debate, Fiorina cemented herself firmly in the running to take place in the next one.