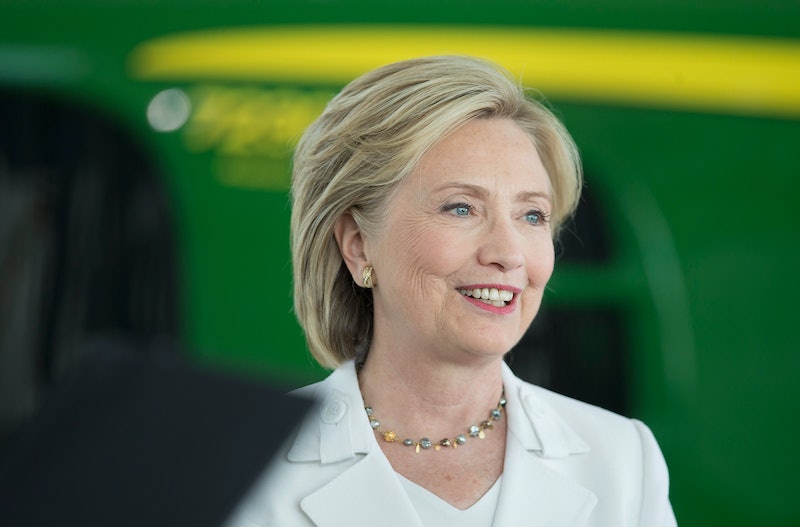 Hillary Clinton is hitting the television circuit. The Democratic presidential candidate has already logged an appearance on The Ellen DeGeneres Show last Thursday, and now, Clinton has set her sights on evening programming with a Wednesday appearance on The Tonight Show Starring Jimmy Fallon. Eager to watch the former secretary of state get cozy at the iconic Studio 6B in Rockefeller Center? Here's how to stream Hillary Clinton on Jimmy Fallon.

Those with cable or satellite providers can tune in on their televisions and online via NBC's live streaming service at NBC.com/live. There are also options for viewers without a television provider as well. If you're willing to wait until the day after the broadcast, Hulu offers up full episodes of The Tonight Show for free, starting with the latest programming. Likewise, clips of the show are made available via YouTube just hours after the east coast airing.

Clinton's appearance promises to be a consciously timed one, as her interview will be taped just hours before the second GOP debate, which will air live on CNN later in the evening. The only other candidate that Fallon has interviewed since returning to The Tonight Show following a brief summer break was Republican front-runner Donald Trump.

Still, Clinton will sure have something to say about the current state of the GOP presidential race, including where Trump stands. Trump, for his part, offered few comments about Clinton. When pressed for his thoughts on the current state of her campaign, he sarcastically told Fallon that "she’s had a very tough time, I feel very badly for her" and insinuated that "bad stuff" would be found from her email archives.

This isn't the first late-night appearance that Clinton has made. She's been a repeat guest on The Daily Show With Jon Stewart as well as The Late Show With David Letterman and has been a one-time guest on The Late Late Show and The Colbert Report. Her last appearance on The Tonight Show was in 2009 while she was secretary of state. Clinton briefly came to former host Conan O'Brien's defense during his feud with Newark, New Jersey, Mayor (now Sen.) Cory Booker. The playful feud culminated in Booker banning O'Brien from the Newark airport, then the state of New Jersey while the comedian banned Booker from Burbank airport and the state of California. Clinton used her diplomacy experience to facilitate a peace agreement between the two.

Judging by her playful sense of humor as well as her repeated guest spots, Clinton's appearance on The Tonight Show promises to be highly entertaining as well as informative. This will be Clinton's first late-night appearance since announcing she was running for president.