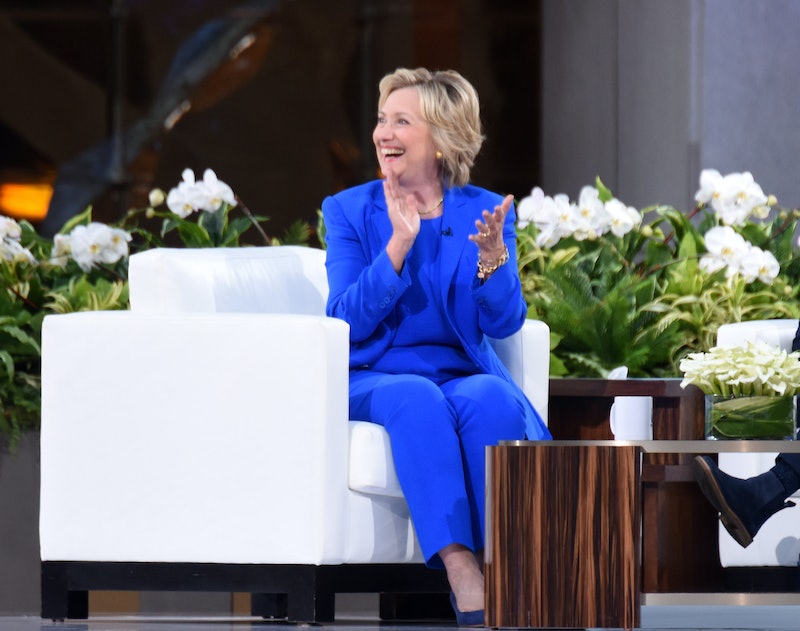 By the time you finish the emotional roller coaster that will be the second Republican primary debate on Wednesday, you will seriously be in need of Hillary Clinton's interview with Jimmy Fallon on The Tonight Show. The GOP debate, which is being sponsored by CNN and the Ronald Reagan Presidential Library, starts at 8 p.m. ET, while Clinton takes center stage as Fallon's guest at 11:35 p.m. ET.

This will be Clinton's first appearance on The Tonight Show as she breaks into the late-night circuit to talk up her campaign. Last week, Donald Trump edged her out as the first of Fallon's political guests when he appeared on Sept. 11. Fallon's interview with Trump wasn't exactly the entertaining or shocking television that many might have expected — on the contrary, it was actually kind of bland.

The good news for Clinton, however, is that even if her interview with Fallon isn't exceptional, she'll still pull in thousands of viewers who are still hopped up on political excitement from the GOP debates. Even if her interview is a bit lackluster, it will still be entertaining — and if you managed to watch the full debate, the Clinton interview is exactly what you'll be needing.

1. Because You'll Need A Change Of Pace

Debates are fast-paced, loud, and can be pretty draining. By the time you get to Clinton's interview, you'll need a slowed down, happy talk in order to calm you down.

2. You Know It Will Be Entertaining

Even if Clinton is stiff and dry, watching Fallon fall all over himself in an attempt to joke with her will be well worth the watch.

3. Because You'll Be Dying To Know What Hillary Thought Of The Debate

Unfortunately, The Tonight Show will have been taped hours before the debate, so you won't get to hear Clinton's opinions on how it went. But I bet that won't stop her from making some predictions for the night.

4. You Get To See A Brand New Hillary

Clinton has entered a phase in her campaign in which she's trying to make herself more accessible to the press and showcase her lighter, funnier side. What better place to do that than with Fallon?

On the scale of improbability, this probably ranks at the top. But maybe if we close our eyes and hope really hard, we'll get to see Clinton face off against Fallon on stage.

6. Because You'll Need To Not Think About Trump For A While

Trust me: you will be on Trump overload by the end of the debate. You have two options for detoxing — either sit in a quiet room by yourself for a few hours, or let Clinton and Fallon distract you. Unfortunately, there's a likelihood one of them will bring him up. But just plug your ears or something.

7. Because It'll Restore Some Decorum To An Otherwise Chaotic Night

Who said debates are dignified? If the evening goes like political experts are expecting, it will basically be a blood bath on that stage. The claws are coming out and these candidates will take no survivors. Watching Clinton might help you remember what the word "stately" means.

8. You Most Likely Will Not Hear The Words "Ronald Reagan"

If you watched the first debate, you'll remember how many times Ronald Reagan was name-dropped. During the second debate, the candidates will literally be standing in front of his airplane on a stage set up in his presidential library. So expect to hear a lot about Reagan. But you know who's super unlikely to say his name? Clinton.

9. It'll Let You Size Up The Competition

What better way to reaffirm your support for Clinton than to be able to directly compare her to the Republican candidates? Or maybe someone on stage will really impress you, and seeing Clinton will seal the deal. Either way, following up the debate with Clinton's interview will let you size up the competition and see who you like better.

Let's be honest — the only valid reason for missing Clinton's interview is if you're just so emotionally drained by the debates that you have to go to bed. But I bet a healthy dose of Clinton and Fallon will cheer you right up. And on the plus side, you'll already be staying up late, so what's an extra half hour?