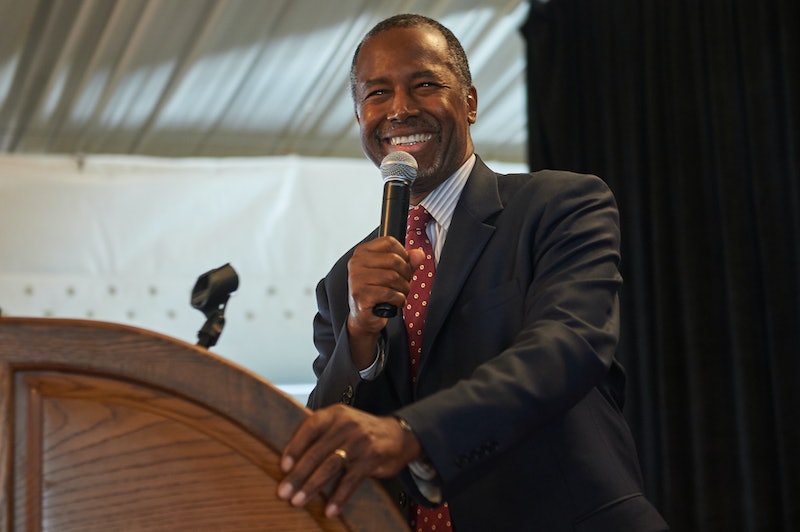 Now that the second GOP debate is behind us, one thing is clear: Ben Carson has become a surprise favorite among Republicans. According to a CBS / New York Times national poll released on Tuesday, Carson is now just four points behind frontrunner Donald Trump. Those rising numbers put Carson right next to Trump center stage at the Wednesday debate, held at the Ronald Reagan Presidential Library in Simi Valley, California. As you can see from the Carson-related memes after the first debate, the candidate drew quite a reaction among viewers.

During the first GOP debate, there were a barrage of Carson memes, the majority of which poked fun at his perceived lack of patience, after he was forced to wait more than half an hour to speak again following moderator Megyn Kelly's first question directed at him. The question was on his lack of political experience, which has been a consistent point of contention for the candidate. But it's also been seen as a positive attribute, as many voters have voiced their disenchantment with career politicians and are seeking fresh faces to lead the Republican party. "I wasn’t sure I was going to get to talk again," Carson joked when Kelly circled back to him, asking about brutal interrogation techniques like waterboarding. He would go on to receive around six and a half minutes of speaking time during the first debate.

This time around, however, Carson got considerably less screen time, and came off as rather reserved and a little bit sleepy compared to his eager colleagues. But there were a few moments that stood out to viewers.

There was the time he and Trump had one of the most awkward high-fives ever.

There was his outfit, which looked oddly familiar.

There was the time Snapchat Lenses came in handy.

There was the time people questioned how Carson could hold some conservative opinions, given his background in science.

And then there were the many people questioning if Carson had perhaps given himself some general anesthesia before coming on stage.

Carson is a stark contrast to the loud-and-proud orations of Trump. Whereas The Donald continues to get noticed for his big personality, Carson's quiet approach has endeared him to voters — though tonight it may have been too quiet. In an interview with The Baltimore Sun, former political aide Douglas Gross sums up Carson's appeal thusly:

Folks are looking for someone who is more calm and deliberative rather than boisterous and belligerent. At the same time he's also new and fresh.

The amount of chatter generated about all three of these aforementioned candidates points to a growing distrust of traditional politicians in the GOP. Fiorina has only once ran for political office. This is both Trump and Carson's first formal foray into politics. If Carson brings more energy to the next debate, perhaps his unconventional background and his deliberate demeanor will take him far.