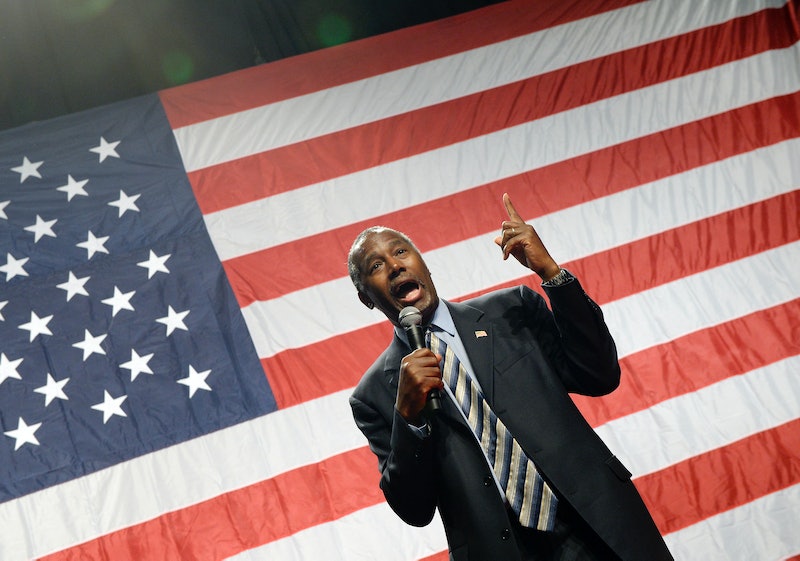 There's no doubt that Donald Trump is the best troll of the year, with his outrageous remarks and insults towards minority groups, political competitors and Rosie O'Donnell. He has called various people "idiots" and "losers." He has called Mexicans "rapists." He gave out Sen. Lindsey Graham's private phone number on live television. He accused Fox News host Megyn Kelly of having blood "coming out of her eyes" and her "wherever" after she asked him about his degrading comments towards women during the first GOP debate. Whenever Trump opens his mouth, you're sure to get great entertainment out of his speeches. But there's another Republican contender vying for the White House that makes Donald Trump look as reasonable as getting your children vaccinated — his name is Dr. Ben Carson. Some of Carson's quotes make Donald Trump look like the most viable option for president — if you scratch your head long enough to go brain dead.

Carson, an incredibly successful pediatric neurosurgeon, has a penchant for making comparisons to the Nazis, drumming up the war against ISIS, and linking homosexuality to bestiality. He's wonderful at being an alarmist, but terrible in being coherent. If you still need to see to believe, here are several Carson quotes that should do the trick.

I mean, [our so­ci­ety is] very much like Nazi Ger­many. And I know you're not sup­posed to say "Nazi Ger­many," but I don't care about polit­ic­al cor­rect­ness. You know, you had a gov­ern­ment us­ing its tools to in­tim­id­ate the pop­u­la­tion. We now live in a so­ci­ety where people are afraid to say what they ac­tu­ally be­lieve.

Carson told conservative news site Breitbart in March 2014 that the widespread urge for political correctness will create a "horrible schism that will destroy our nation."

There comes a time when people with values simply have to stand up. Think about Nazi Germany. Most of those people did not believe in what Hitler was doing. But did they speak up? Did they stand up for what they believe in? They did not, and you saw what happened.

In a January 2014 fundraiser for Oregon GOP Senate Candidate Dr. Monica Wehby, Carson made another Nazi comparison to the future of the United States.

You can't dance around it. If people look at what I said and were not political about it, they'd have to agree. Most people in Germany didn't agree with what Hitler was doing [...] Exactly the same thing can happen in this country if we are not willing to stand up for what we believe in.

When The Washington Post's Ben Terris asked if the 2016 presidential candidate went a little too far in comparing progressives to Nazis, Carson went with the Nazi comparisons once again.

I think most people, when they finish that course, they'd be ready to go sign up for ISIS.

When Carson spoke at the Center for Security Policy's National Security Action Summit on October 2014, he criticized the new AP U.S. History curriculum for allegedly focusing too much on America's worst periods.

Carson Makes Another Awful Comparison... With Slavery This Time

You know, Obamacare is really, I think, the worst thing that has happened in this nation since slavery. And it is, slavery in a way, because it is making all of us subservient to the government.

During the conservative Value Voters Summit in October 2013, Carson compared universal health care to Leninism and accused the government for trying to implement control over the American people.

Despite Being A Medical Expert, Carson Thinks Ebola Can Be Used For Bioterrorism

So if there were a container of contaminated urine, and somehow it managed to find its way to someplace a lot of damage could be done. Someone comes up to a lab worker. He knows he's got the urine. "How would you like to have a million dollars?" ... Such things have been known to happen.

Carson made another attempt in fear-mongering over the Ebola outbreak by claiming, despite disagreements from infectious diseases experts, that the virus could be used as weapon for bioterrorism when he appeared on Fox News' Your World With Neil Cavuto in August 2014.

They've [ISIS] got the wrong philo­sophy but they're will­ing to die for what they be­lieve, while we're busily giv­ing away every value and every be­lief for the sake of polit­ic­al correctness.

In January, Carson told a packed audience at the Republican National Committee's Winter Meeting the United States lost the sense of urgency the Founding Fathers had when they were trying to establishing a nation. He later compared the Founding Fathers to ISIS when it comes to understanding the need of urgency.

A lot of people who go into prison [are] straight, and when they come out, they're gay.

Last March, Carson told CNN's New Day host Chris Cuomo that he believed homosexuality is a choice and brought up prison as an example. He's probably watching Orange is the New Black way too much to understand the implications of rape in prison.

Carson Thinks Obama Is A Psychopath

Like most psy­cho­paths. That's why they're suc­cess­ful. That's the way they look. They all look great [...] But he knows he's telling a lie! He's try­ing to sell what he thinks is not true! He's sit­ting there say­ing, "These Amer­ic­ans are so stu­pid I can tell them any­thing."

After Carson's business manager mentioned how "clean" and "elegant" Obama looked during the State of the Union Address in January, the neurosurgeon compared the Leader of the Free World to psychopaths.

More like this
Kit Connor Speaks Out On “Shocking” Lack Of Bisexual Representation
By Sam Ramsden
Prince William Condemns “Unacceptable” Comments Made To A Black Guest At Buckingham Palace
By Shahed Ezaydi
'Waterloo Road' Is Back, With More Than A Few Familiar Faces
By Sam Ramsden and Vivian Iroanya
The Best Looks From The Emily In Paris Season 3 Premiere
By Allie Fasanella
Get Even More From Bustle — Sign Up For The Newsletter