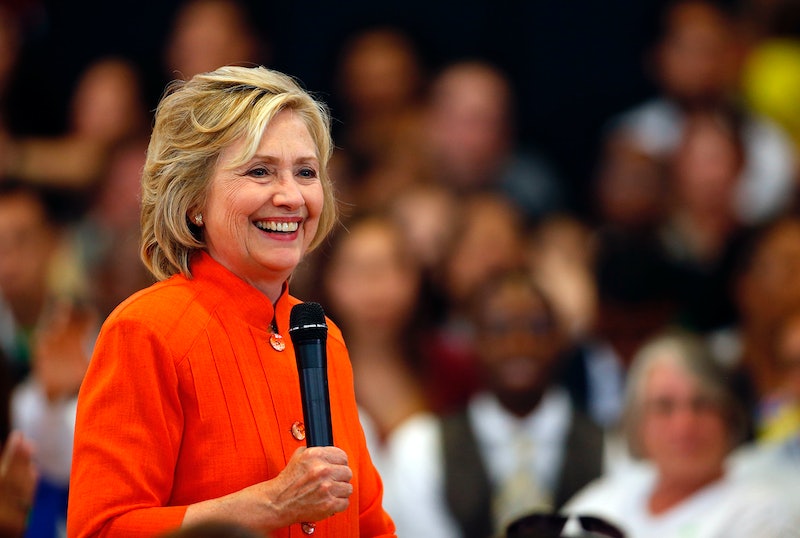 It's about damn time Hillary Clinton is speaking to America. I mean, yeah, you can say she's been doing that on the DL (and in a Scooby van) since announcing she was running for president in April, but the Democratic candidate has largely shied from the spotlight and avoided national press. But with her first late-night appearance set for Wednesday on The Tonight Show, it seems Clinton is finally ready to sit down and have as candid a chat as she can with one comedian, a couple hundred in-studio audience members, and millions at home. But if you really want to get into why Clinton chose Fallon for her first late-night interview (or why it "happens" to be the same day as the second GOP debate), you'll have to first understand what the appearance signifies for her campaign.

Clinton has been dogged with scandals pretty much her entire political career, and with a second presidential run already in a skid — she still has a significant lead nationally, but in key states like New Hampshire, she's now coming in below Bernie Sanders — her Tonight Show appearance is part of a conscious effort to make the notoriously inaccessible politician, well, accessible. From her first national interview with CNN in July to last Thursday's stop at The Ellen DeGeneres Show, during which she eagerly tried to whip and nae nae, Clinton has now entered the active phase of putting herself in every possible setting to appeal to potential voters.

So why Jimmy? With decades-old talent bowing out to make room for fresh blood, late-night television is seeing a rebirth (albeit still a male-dominated one), and it's honestly changed the game. That's what makes the Fallon pick a fascinating study to dissect. Let's break it down, y'all.

She'll Get To Have Fun (In Front Of America)

Just last Friday, Trump stepped onto The Tonight Show stage and participated in a hilarious sketch that pitted the Republican against his mirror image — aka Fallon as Trump, wig and all. Only the Saturday Night Live veteran could pull off that kind of segment, and it was wildly successful for both Trump and the show. You just know Clinton has been brainstorming with the Tonight Show team on how to make a winning recipe.

She Can Show Her Musical Chops

Fallon is famous for his musical bits — from lip sync battles to singer impressions — and I wouldn't be surprised if this is the route Clinton takes to appeal to Americans. After all, it worked for her husband. Bill Clinton's unforgettable saxophone performance on The Arsenio Hall Show was a highlight of his 1992 presidential campaign, and no one could deny the lure of that smooth play.

Clinton will be answering hard questions for months, but this isn't the time for that. The truth is Fallon isn't really the kind of person who will dig deep, largely because he wants America to have a good time. Sure, he'll make a passing joke here and there at your expense, but when you're sitting down next to him on live TV, chances are he'll play softball as America's goofy young brother.

She Can Get Revenge For That Horrible Clinton Baby Joke

Fallon is usually on America's good side with his inventive bits, but one Clinton baby joke put him on the receiving end of a chorus of boos. In April, Fallon made note of Chelsea Clinton's pregnancy by joking, "If it's a girl, it will get some of Chelsea's old hand-me-downs, and if it's a boy, it will get some of Hillary's." He went on to defend the poor pantsuit reference even though the studio audience just wasn't having it. Honestly, the best revenge zinger Clinton could dish out is if she gifted Fallon a tiny cream pantsuit.

She Had To Pick Someone

Colbert is pretty new in his Late Show seat, as is Trevor Noah with The Daily Show, making both the kind of unpredictable interview she'd want to avoid. (CNN reported Clinton turned down an offer to appear on Colbert's show premiere due to ongoing talks with The Tonight Show.) Kimmel is probably a little too fratty for her tastes. Oliver would not only eviscerate her with his unearthly sarcasm, but HBO wouldn't have the right kind of primetime exposure her team would be looking for. By process of elimination, Fallon is the obvious choice.