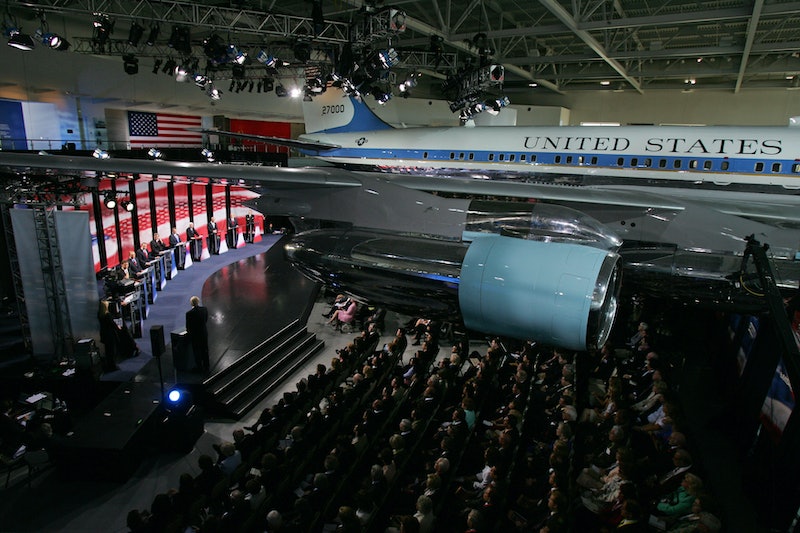 When you have 11 Republican candidates on one stage, there's already a lot going on. Your eye will inevitably gravitate toward the fake spiderweb Halloween decoration that Donald Trump calls hair, or maybe you won't be able to stop staring at Marco Rubio's inhumanly large ears, or perhaps you'll spend the entire debate searching for some semblance of substance in Scott Walker's vacant gaze. However, Wednesday's GOP debate will give viewers something else to look at that might upstage even Rand Paul's side-eye. There will be a full-size plane at the CNN GOP debate — yes, an actual Air Force One will just be hanging out on stage behind the candidates' podiums. Nope, that's not distracting at all.

This particular Air Force One was once used by President Ronald Reagan and now is on display to the public at the Ronald Reagan Presidential Library in Simi Valley, California, where the second GOP presidential debate is taking place on Wednesday night. The aircraft is one of several Air Force Ones on display throughout the country. So that answers the question of whether it was brought in specially for the debate (no, it was not, but how baller would that be?). But why an airplane for a debate backdrop? According to Wired, it was supposedly chosen for symbolic purposes.

However, those are just two questions answered. The excessively elaborate prop leaves me with many more unanswered questions. Questions like: