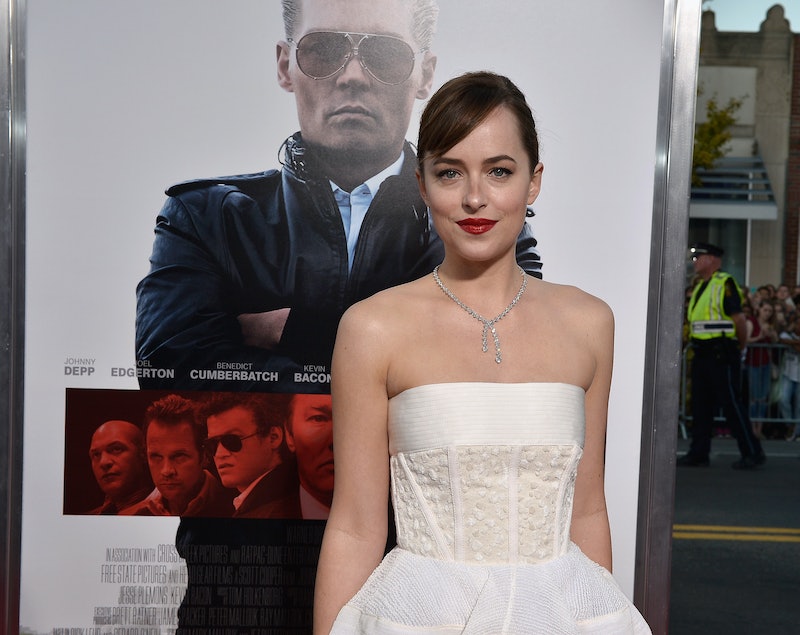 Fresh off the film festival circuit, which included stops in Venice and Toronto, the cast of Black Mass, starring Johnny Depp, Dakota Johnson, and Benedict Cumberbatch, headed back to the scene of the crime — Boston, where filming took place. And, naturally, they brought no shortage of head-turning red carpet style to the Black Mass premiere at the Coolidge Corner Theater.

Johnson, the film's leading lady, stunned in a white strapless Balenciaga dress with a delicate diamond necklace. Depp, who underwent a major (and majorly creepy) transformation to play Boston mob leader Whitey Bulger, looked more recognizable on the red carpet than he did on the big screen. He rocked a Creamsicle-colored blazer over a black vest and pants, along with signature piles of jewelry and round sunglasses. Rory Cochrane, known best for his role in CSI: Miami, wore a blue-black blazer, and actress Julianne Nicholson rounded out the color palette in a textured burgundy dress with sheer panels.

The film is getting a lot of buzz for Oscar-worthy performances, but I think the cast definitely deserves an award for the subtle but sure color coordination of their red carpet looks.

I love that the actors all look like movie stars at the premiere, especially considering that after the whirlwind of not one, but two huge film festivals, it must have been pretty tempting to cop out and just thrown on a boring suit or a get lazy with a blah dress.

Johnson gets the Best Dressed award for the evening. She channeled the effortless glam of a screen star like Audrey Hepburn, who knew how to wear a gorgeous ballgown with the ease of silk pajamas.

The white Balenciaga dress is stunning, but the delicate necklace totally makes the look.

Her auburn hair totally sets off the burgundy in the dress, and the sheer elements of the top are balanced out by the modest length and high neckline.

Cochrane must be getting grooming tips from buddy Ben Affleck, who directed him in Argo. But facial hair aside, the suit, in a subtle slate shade, is a nice alternative to black, which would have felt too somber for a Tuesday night movie premiere.

3. and 4. Johnny Depp and Amber Heard

Heard wore a simple black suit with the slightest sliver of skin above the high waist of the pants. She's usually no stranger to red carpet glam, but it seems that for her husband's big night, she decided to tone it down and let his style shine. I love the simple, clean makeup, and if anyone can pull it off it's Heard. But, she could have put a little more effort into her hair; even a simple, low ponytail would have looked a lot less sloppy.

IMHO, his peachy blazer seemed more suited for a marquis singer on a seniors' cruise, but I give him kudos for even wearing color, an art that most male actors seem oblivious to. A quick iron or steam before the red carpet wouldn't have hurt, though.

His daring doesn't end there; he also wore two-toned creepers, which totally matched his checkered pocket square and the black-and-white elements of his outfit.

Turns out, Depp is not afraid to get caught wearing the same thing twice. He was spotted wearing the orange blazer while popping out of a boat in Venice during a romantic ride with Heard, and he rocked the shoes on a red carpet event, also in Venice: